A Visit to Pygmy/Strapless hatches

Well, I never made it out to Port Townsend last weekend like I'd hoped to (ended up doing some awesome skiing at Baker instead!). So I took yesterday off of work and headed over.

First let me say how great the people are at Pygmy. Kelly spend about a hour with me answering my questions, and going over the boats, and construction methods. BTW she's an avid reader of this site and said to say "hi" to everyone. (Darren, she hopes to see your boat in person when your done.)

I went in with the intention of buying a Coho kit, but decided to do a test paddle and compare it to the Tern before I handed over my hard earned plastic. I'm glad that I did, as I confirmed that the Coho is the right boat for me. I appreciated it's initial stability, and felt that it responded to my body movements in a more intuitive way.

So I handed over my card, and took home a Coho kit, with the hatch and bulkhead kit.

I was Very tempted to get the Sapele model, but decided against it solely on the fact that I didn't want the extra 5 pounds the sapele veneer adds to the weight of the finished boat. Instead I think I'll choose to stain the panels, based on the good results that I see Darren having, though I'm going to go with a more conventional color (maybe mahogany or cherry) than Darren's "purpleheart", as beautiful as it is.

There was a sapele model on display in the store though, that was absolutely gorgeous. It looked like a fine peice of furniture; the finish was immaculate, and the builder used a technique that didn't require drilling holes in the panels for the stitching (unfortunately in my rush to catch the ferry yesterday morning, I forgot and left my camera at home, so no pictures). The builder is from Snohomish, and this is his 12th Pygmy. Apparently he's been using this technique since his 3rd build. As explained by Kelly, he uses a high quality 3M strapping tape to temporarily hold the panels, and small dabs of 5 minute epoxy to do the actual "stitching". The result is a finished boat unmarred by the 1/16" holes along the panel joints. Again, I'm tempted, but I think this technique is a little advanced for me as this is my first boat, so will stick with the wire method.

The sapele Coho also had an innovative hatch closure system. There were two "z" clips epoxied to the hatch end nearest the cockpit, that were sized to slip under the hatch lips slugly. The other end of the hatch had a piece of plastic tubing epoxied to it through which ran a cord. The cord started at a metal bolt standoff and then through the tube, and then down again through the bulkhead and to a cleat at a point about 5 inches below the deck. 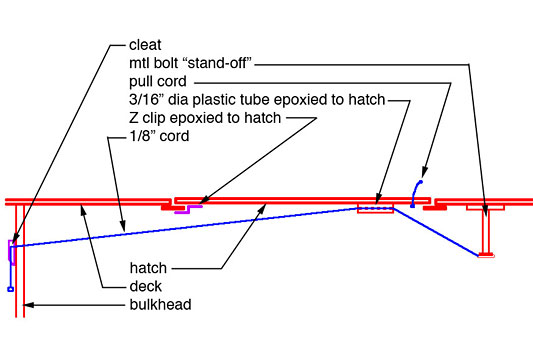 When the cord is pulled tight the hatch is pulled down and toward the Z-clip end. The result is a very clean design, with only the small pull cord on the outside. Kelly told me that the builder has rolled these kayaks and the hatch remains water tight.

The cord is detachable from the stand-off when there is no tension on it, so that he entire opening is usable. This has the added benefit of keeping the hatch teathered to the boat when it's open.

Peel, that is an innovative way to maintain a clean deck for a hatch closure. However, I'd worry some about its security. It does not take much outward force to open that hatch because of the shallow angles with the security cord.

Ordinary rolling does not put much stress on a hatch closure. If the owner had said he had surfed the boat several times, and it survived a windowshading or two, then I'd be impressed.

Losing a hatch could be terminal for the kayak, or at least convert it to an expensive spar buoy. :lol:

Kelly emailed Dan some pics of that coho a few weeks ago. I hope its cool to post these 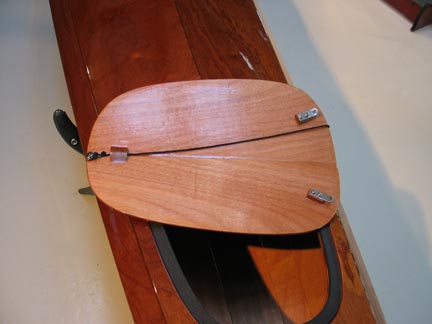 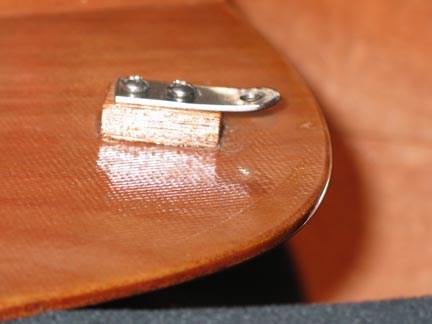 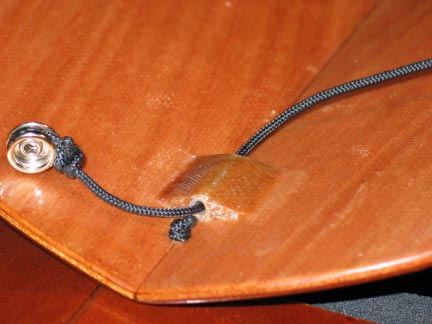 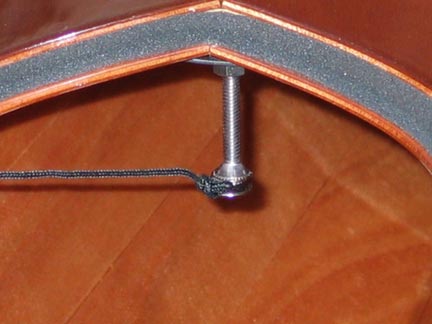 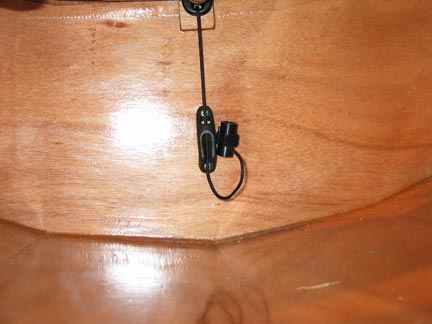 Ted Henry employs a similar under-the-deck leash system but has also imbedded earth magnets into his carbon fiber hatch lips for further reinforcement. Quite an elegant look although I do feel safe in knowing that my rather bulky looking cam buckles and straps will likely never fail.

I asked Kelly about that system after I noticed the hatches in the photo in their catalogue -- she explained the system to me over the phone and I was intrigued so she sent me the photos. I was quite excited because if at all possible I'd like to use strapless hatches on my Coho (but not at the expense of safety). After much consideration I decided against using it because, as Dave mentions, there's very little security with this particular system.

The biggest thing that I see is that any type of failure will be catastrophic -- if the cord breaks or gets knocked from the cleat, or if a piece of gear knocks the snap button, the hatch will fly off. I don't think I'd want to have to deal with that scenario while in rough water. And in such an event, even if someone is close enough to assist there's not going to be much they can do because a repair will be needed (for anything worse than the line coming loose from the cleat).

Another thing that bothered my with this system is that it is under tension when closed. I'd much prefer a system that requires tension to release the hatch -- such a system allows the hatch to be secure while idle.

And finally, the last thing that I considered is that oftentimes my gear is crammed into the hatches right to the brim -- any type of mechanism protruding into the inside of the hatch may result in the system failing or not closing properly if gear is in it's way.

Don't get me wrong, this system is quite clever and with some reworking might work much better -- it just doesn't satisfy my needs for the type of paddling that I do.

I've been looking at strapless hatch systems on all kinds of websites for the past three years and have seen nothing that will give me the same amount of security as the Pygmy hatch method. I use my boats for extended trips -- so for me, it's function before form. I don't want to take a step backwards from the hatch security that I've known with my double. So if I can't come up with a strapless system that equals the security of the Pygmy method before the time comes to install the hatches on my Coho, I'll use the stock Pygmy hatches and be happy knowing that I'll never need to worry about leaking or problem hatches.

Having said all this -- it's really good to see kayak builders coming up with innovative hatch systems. It would be nice not to clutter the deck of a nice wooden boat without gaudy hatch straps -- and for someone who is using their boat for day trips and don't have the concerns about packing gear, there are a few strapless systems that work well enough.

Hatch security is paramount. While I think that the stock strap & hardware arrangement looks a bit "busy" I'm comfy with it's security.
The method featured in this thread makes for good furniture but I don't feel it is a reasonable real world solution for keeping my hatch closed. These are boats not coffee tables.
Jon
You must log in or register to reply here.
Share:
Facebook Reddit Pinterest Tumblr WhatsApp Email Link
Top