As my partner’s granddaughter is now tall enough to assist at the kitchen sink, I can show her the fun of sinking the floating dishes at wash time. I’ll try to do it without militaristic overtones (or humming the “Sink the Bismark” song). And I was thinking of explaining that if something is lighter than the water it displaces, it will float - Right? Do I understand that correctly? We could experiment by weighing things and weighing the water they displace.

But other scenarios came to mind and I’m trying to make them gel with that displacement statement. Like I can float in water when I have a deep breath. But when I exhale, I sink. Because I’m not changing my weight - I do exhale when on the scale for my yearly physical but it doesn’t seem to affect the reading much - I imagine the inhale, expanding the lungs, creates a larger “body” that displaces more water.

Then I thought about being vertical in the water and how I go to the bottom (same volume displacement) but in that case I’m not “neutral”. Like I can put a stick vertically in the water but if no other forces are on it, it will “adjust” to the position it needs to float. So I’d image I’d float too if I didn’t try to influence body position.

The stumper is when something floats partially submerged - like “floating” a few feet under the surface. Can logs do that? Or submarines? I can see how a submarine can travel at X depth when moving because the vanes can act on the water while the boat is moving forward. But just hovering at a certain depth? It seems the volume displaced - the outside of surface of the submarine is the same. As ballast is let in, the boat becomes heavier than the volume the hull displaces so it dives.

The part I am missing is this displacement idea seems to be, “It floats or it sinks.” What needs to be added is an explanation of why something doesn’t float on the surface, or sink to the bottom. Perhaps it has to something to do with water pressure pushing up from below vs the water above the submarine (or body, or log) pushing down from above?

What am I missing?

Thus something could be a density to sit just right at a certain depth. Submarines and fish do this by regulating their own density, in both cases it simplistically involves gas in a bladder, not unlike the lung full of air in your analogy.

Salinity is also another factor, which is why you sometimes see freshwater floating on top of salt. And in whitewater you get lower density of the water because of increased aeration. All fascinating stuff.
J

cougarmeat said:
Perhaps it has to something to do with water pressure pushing up from below vs the water above the submarine (or body, or log) pushing down from above?
Click to expand...

I can't provide a complete explanation, but water pressure doesn't push down or up - it's pushing from all sides. At some depth, whether it's a human body doing dives or a submarine, the pressure will squeeze the body enough to decrese its volume - increasing it's density - and the body will head for the bottom.
J

One avenue to explore:
https://en.wikipedia.org/wiki/Buoyancy_compensator_(diving)

This page is interesting:
http://www.hurricanescience.org/science/basic/water/

Note how the text states that salinity increases with depth, while the graph just below shows it's not quite so simple! 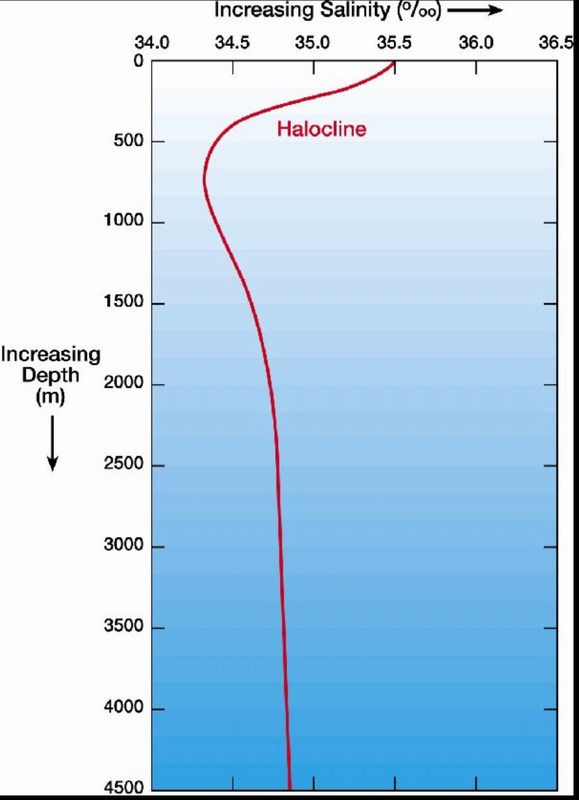 Because water is fairly incompressible, I believe it is quite difficult for submarines to hover at a particular depth and that steep or abrupt thermoclines are an assist because that exaggerates the small differences. Exposed to pressure air chambers - as in the human body - are however compressible and provide a further challenge to depth constancy. As well, submarines can exploit or be challenged by salinity [therefore density] differences because of rivers, etc. - ie in inlets.
J

CPS said:
. Submarines and fish do this by regulating their own density, in both cases it simplistically involves gas in a bladder, not unlike the lung full of air in your analogy.
Click to expand...

Correct. We regulate our volume (when the water pressure allows it!) by inhaling or exhaling, with our mass constant.
Last edited: Mar 21, 2021

Thank you for your answers and references. I’ve never actually seen a submarine “hover”, except in movies. Hum… could it be just a …movie. Thermoclines, salinity, and density would be a bit much for the little one. For now, we’ll just “sink the floating cups and bowls” at the sink.

Neutral buoyancy—the ability to "hover" at depth without effort—is a big deal in scuba diving. Once a diver achieves neutral buoyancy through a combination of weights and inflation of the buoyancy compensation device, he or she will hover in the water, neither sinking nor floating.

However, as the West German Navy explains in this article at pg. 20, and as Mick Allen also alludes to in his comment above, perfect neutral buoyancy is difficult or impossible to maintain:


When a submerged submarine without engine power is considered to be neutrally trimmed, it is assumed to be acting in accordance with Archimedes principle. Actually, this is not entirely possible because a state of equilibrium can be obtained only approximately when submerged. The pressure hull is elastic and sea water is only slightly compressible. The pressure hull compresses as the submarine dives; thus the pressure-resisting displacement is eliminated, and the submarine sinks more rapidly. The analogous condition achieved by a balloon floating in the air cannot be established under water if the sea water density is assumed to remain almost constant.​
​
A vessel can remain in the stopped condition at a specific depth under water only by alternately flooding and blowing tanks. This condition can be reached automatically by a depth control system that floods and drains the regulating cells. The diving pressure serves as the impulse transmitter. The desired depth can be set on this device.​
​
However, there are certain areas, the Strait of Gibraltar, for example, where there are distinct strata of sea water with different densities. A vessel can drop into one such layer and remain above a denser layer. It can penetrate the denser layer only by taking on more ballast water.​
Alex
R

That is exactly what sunk the US atomic Sub USS Thresher in 1963. Due to a storm in the south Atlantic, colder water was flowed south and engulfed the Thresher before the crew realized they were desending it was to late. If you look it up you will not find this to be the offfical reason.
Howwever I remember it to be the reason given after the sinking. The difference in water densities confused the issue and the ship was not recoverable by the time they realized it. This may of been mis-information at the time. ( the colder water should of raised the ship)
I think the diving depth of a US Atomic Sub is still classified and the offical reports were indended to not disclose the actual depth of the sub.
A 1000 feet is given out ant the time and in the offical report CC BY-SA 3.0 as given in Wikipedia.

Any enginner can caulacate how thick a steel hull need to be for any depth. It is simple math, but the engineering is not simple.
R

Roy222 said:
Most of Canada's bodies of water would never melt if water density increased al the way to the freeze point.
My memory might be wrong- look it up.
Click to expand...

Yes for fresh water the maximum density is at 4C, which is very important for how lakes and oceans freeze. The density is lower below 4C as the water molecules begin to link up into the ice structures. In the northern lakes one sees the lake waters "turn over" in late Fall and Spring as the surface water temperatures change.

In salt water, salinity is driven out (entropic process) as it approaches freezing so what freezes is essentially fresh water, and currents of higher salinity develop.

Water is almost completely incompressible (large bulk modulus) so even at high pressure in deep water the density is almost unaffected. This is very different in the atmosphere.
Last edited: Mar 25, 2021
You must log in or register to reply here.
Share:
Facebook Reddit Pinterest Tumblr WhatsApp Email Link
Top