A strong low-pressure cyclone off the west coast was wreaking havoc over the weekend across broad swathes of Northern California and the Pacific Northwest. At its strongest, the storm was the deepest low-pressure system ever recorded off Washington. Even from hundreds of miles out to sea, such a powerful storm was able to cause damage onshore—two people died in Issaquah when a tree fell on their car.

All waters in Washington were subject to storm warnings or small-craft advisories. However, through careful study of the models and forecasts, I decided that Carr Inlet in south Puget Sound would not likely be too gusty. Just in case my optimism proved mistaken, I set up a route that would have me paddling southbound on Saturday, when storm winds would be weakest, and northbound on Sunday, when storm winds would be strongest. 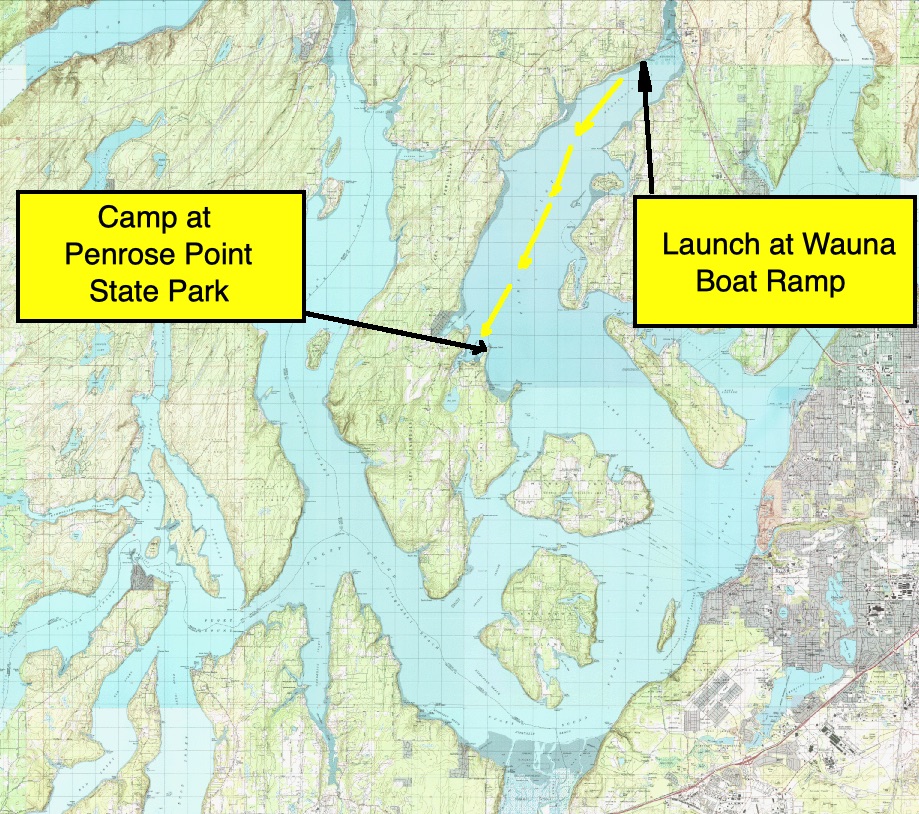 00 Route map. I had originally intended to paddle the way past McNeil Island, but I decided to keep the paddling distance short on account of the weather.

During the southbound leg on Saturday, there was zero wind. Even during the northbound leg on Sunday, sustained wind was just fifteen knots. In these conditions, it was only a two-hour paddle each way to the campsite at Penrose Point State Park.

A lot of birds and mammals were abroad on Carr Inlet this weekend. Red-breasted and common mergansers formed large flocks, as did surf scoters. A handful of buffleheads had recently arrived from up north to overwinter. The grebe population had swelled to its usual wintertime abundance, with many horned and western grebes but unfortunately no red-necked. There were even a couple of white-winged scoters, which seem to have expanded their range in recent years.

Most exciting were the harbor porpoises. This species has made an explosive rebound in Puget Sound in recent decades. Having all but vanished from the sound by the 1990s, there are now upwards of 11,000. Several pods approached my boat, sometimes quite closely, including one pod of eight or nine individuals. 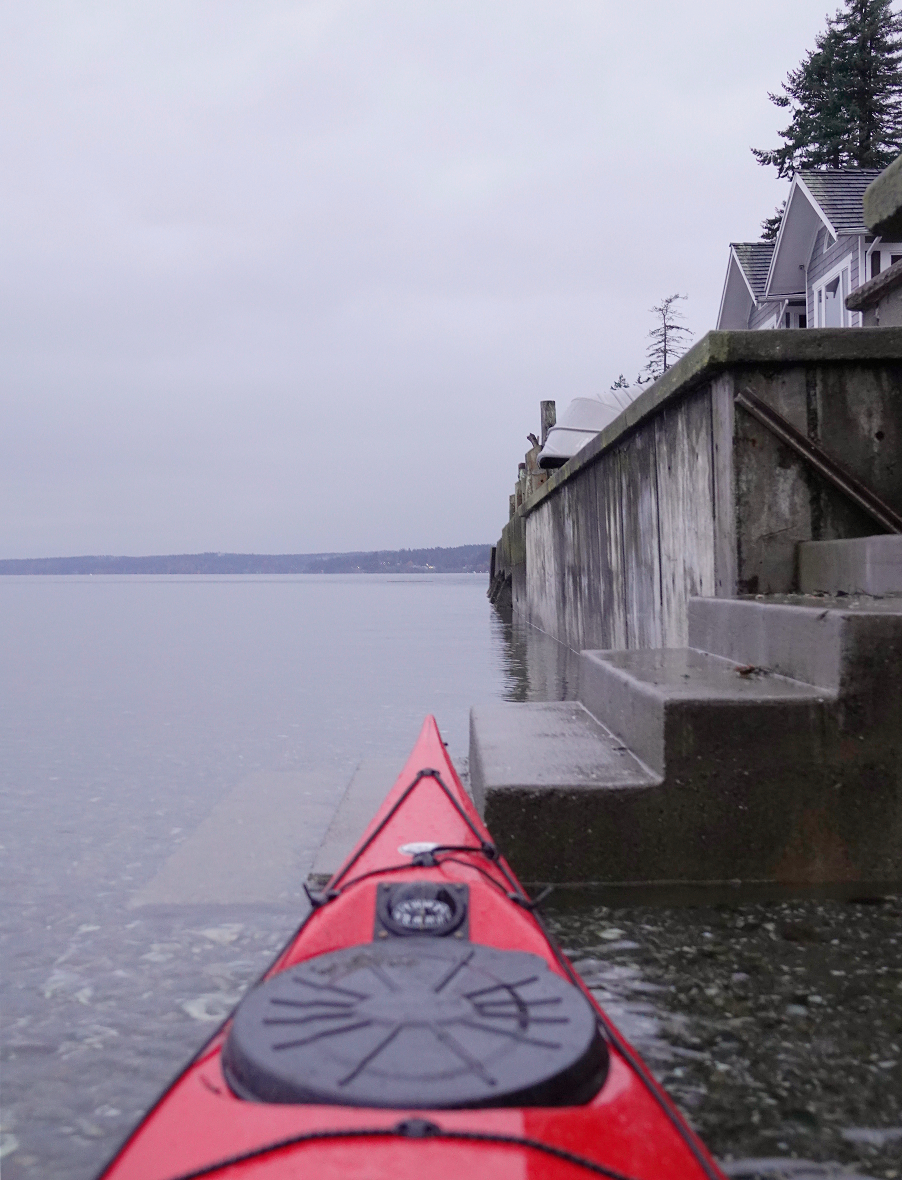 01 Kayaking shoreline, Carr Inlet. At high tide, the water reached many of the houses’ shoreline bulkheads. 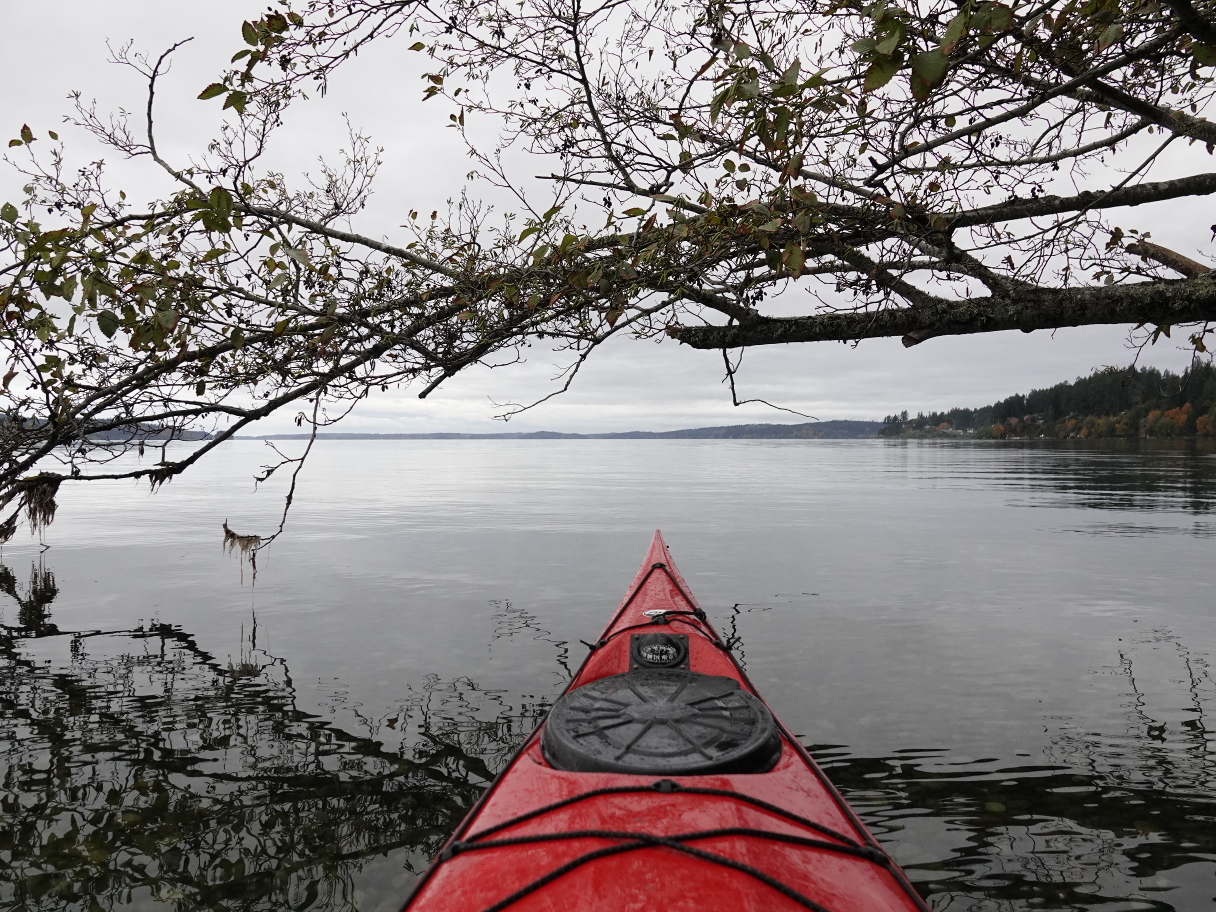 02 Paddling under tree, Carr Inlet. Noise from traffic grew quieter farther south in the inlet but it never disappeared altogether. 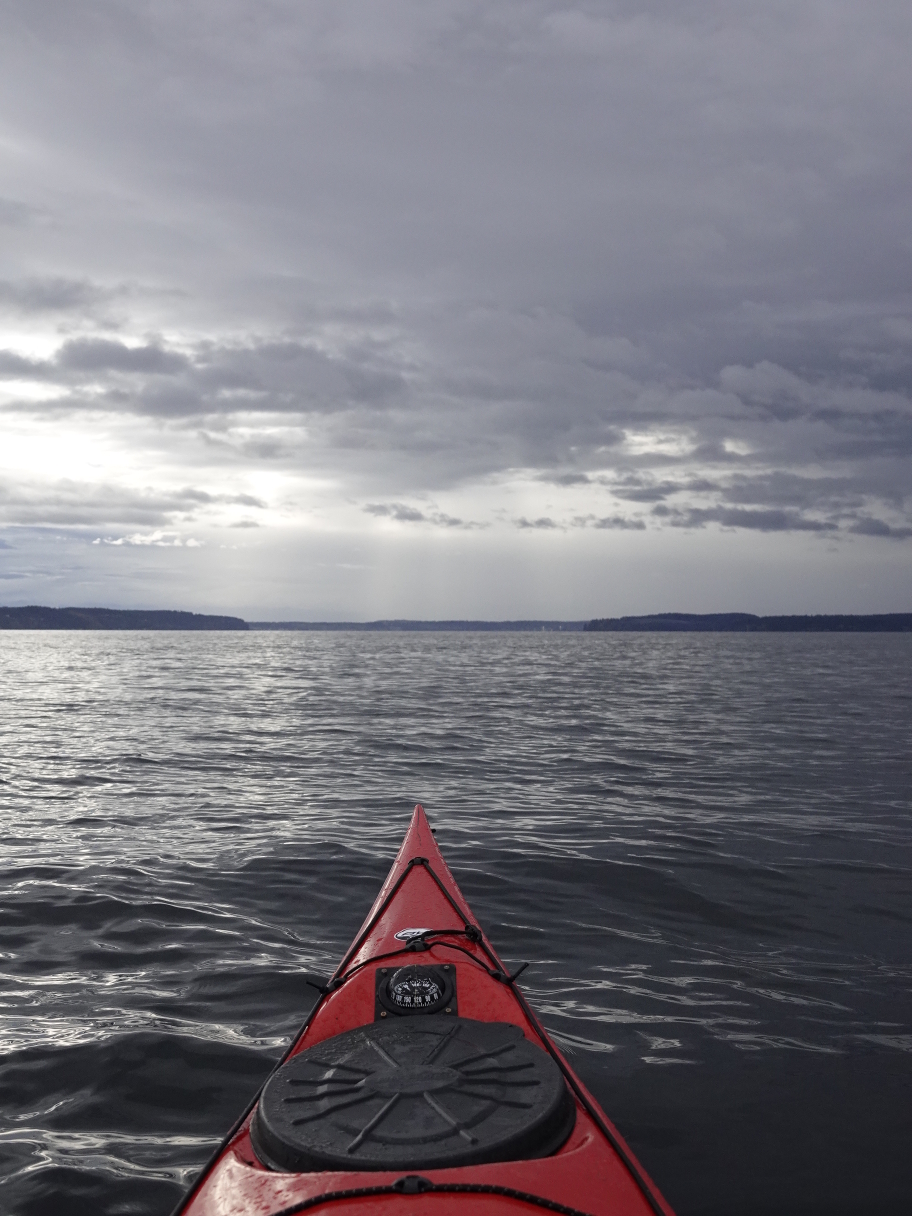 03 Paddling southwest down Carr Inlet. Tidal currents were negligible in either direction. 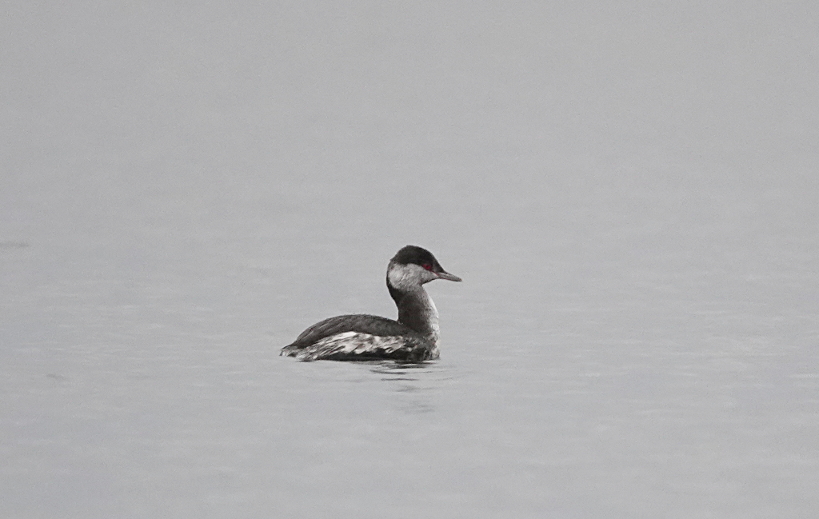 04 Horned grebe, Carr Inlet. Other than the scoters and mergansers, this was the most common species on the water. 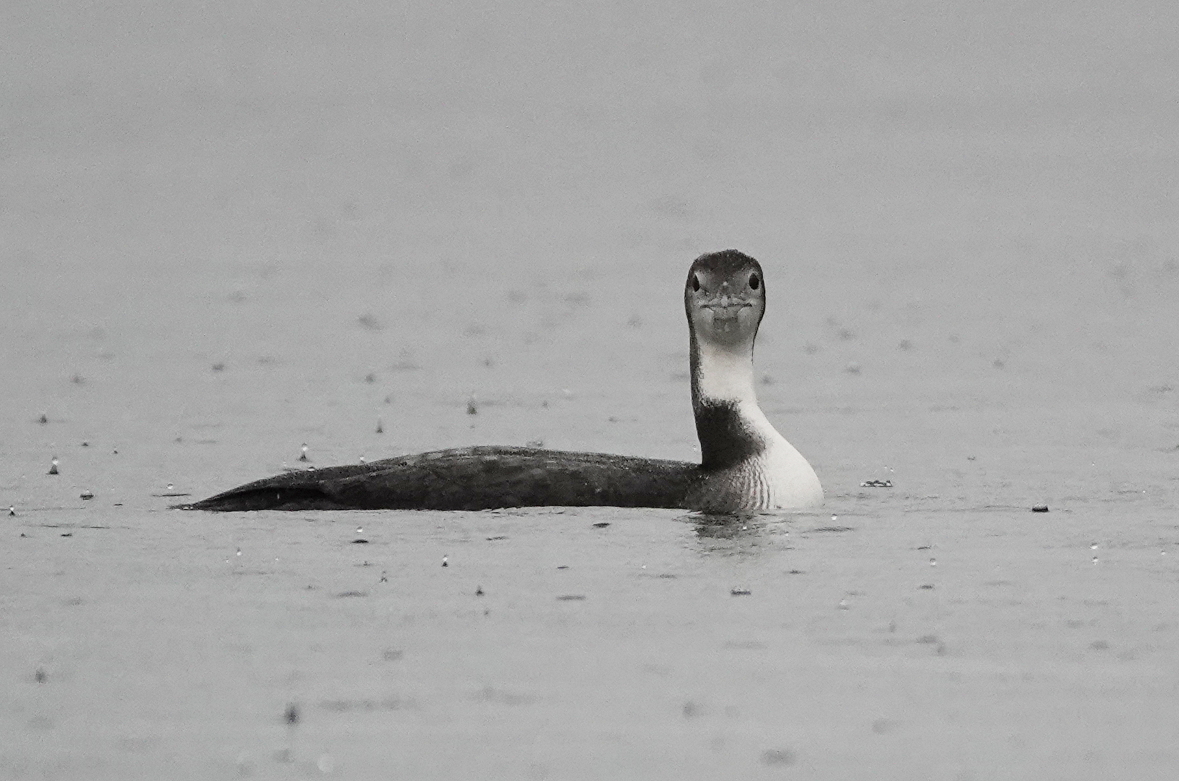 05 Common loon, Carr Inlet. The loons were hooting and warbling back and forth. 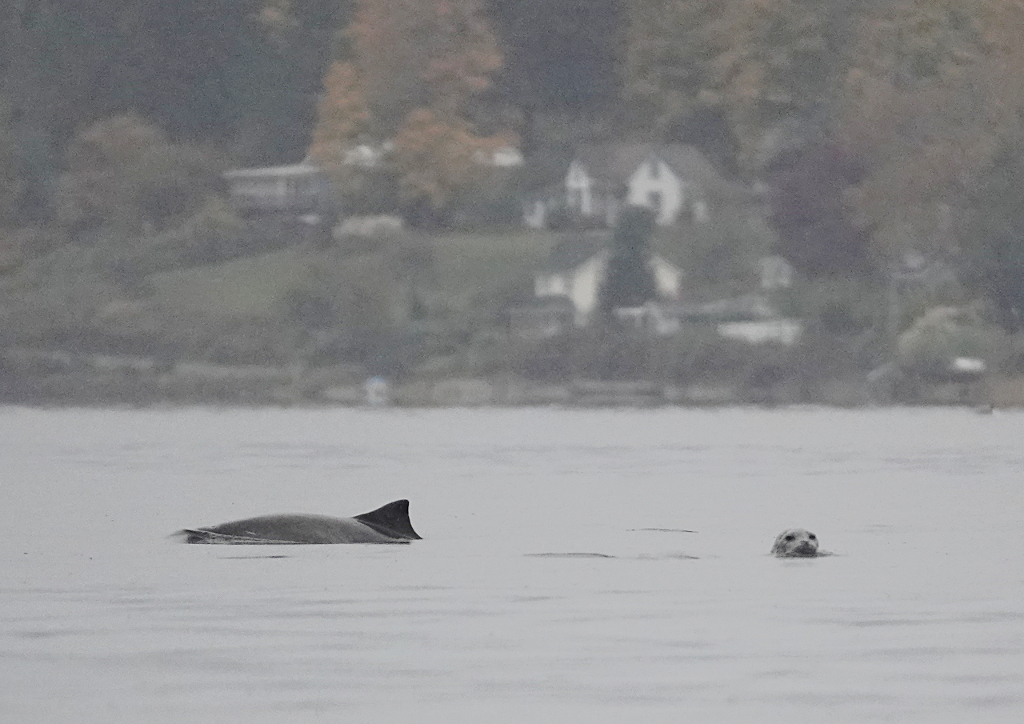 06 Harbor porpoise and harbor seal, Carr Inlet. Despite their proximity in this photograph, the two species do not associate. 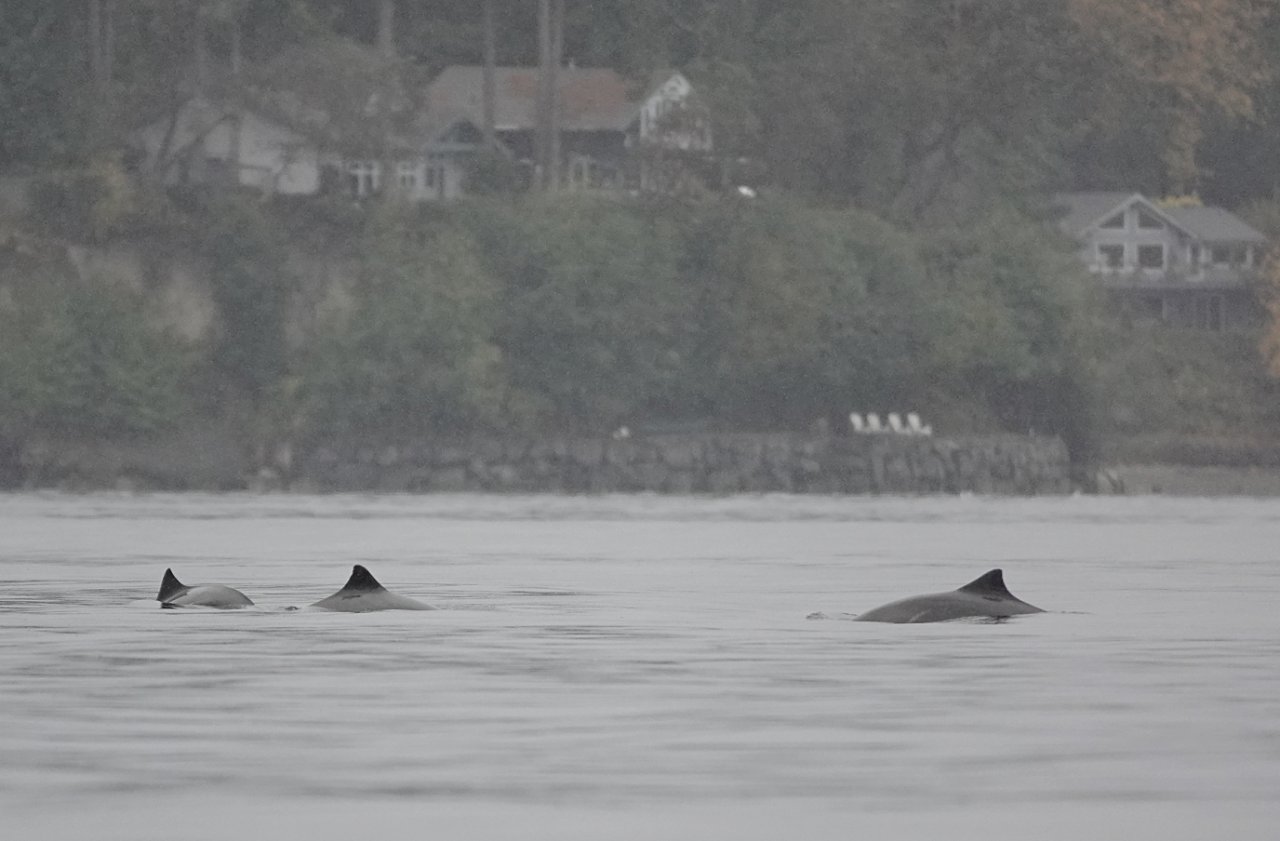 07 Harbor porpoises, Carr Inlet. Porpoise breaths are audible across a considerable distance, but they only rarely produce visible spouts.

Penrose Point is a great kayaking park. The single kayakers-only campsite is near the beach but far from the noisy, crowded car-campground. There are miles of hiking trails through a maturing second-growth forest. The point itself protrudes into Carr Inlet, giving long vistas north and south.

Late October was the perfect time to visit. The maples and other broadleaves were at the peak of their color. I spent hours wandering the forest, seeing few birds but enjoying the spectable of the trees.

In the afternoon, a band of heavy rain rolled in. I retreated to the tent to read. I lay down and closed my eyes, just for a moment…and when I woke up, it was the middle of the night and I had yet to make dinner!

A sign at the trailhead warned of a recent cougar sighting. Excited at the possibility of seeing such a rare animal, I woke up before dawn, eager to hit the trail. Before getting out of the sleeping bag, I closed my eyes, just for a moment…and when I woke up, it was nine o’clock in the morning and any hope of finding the cougar had passed! 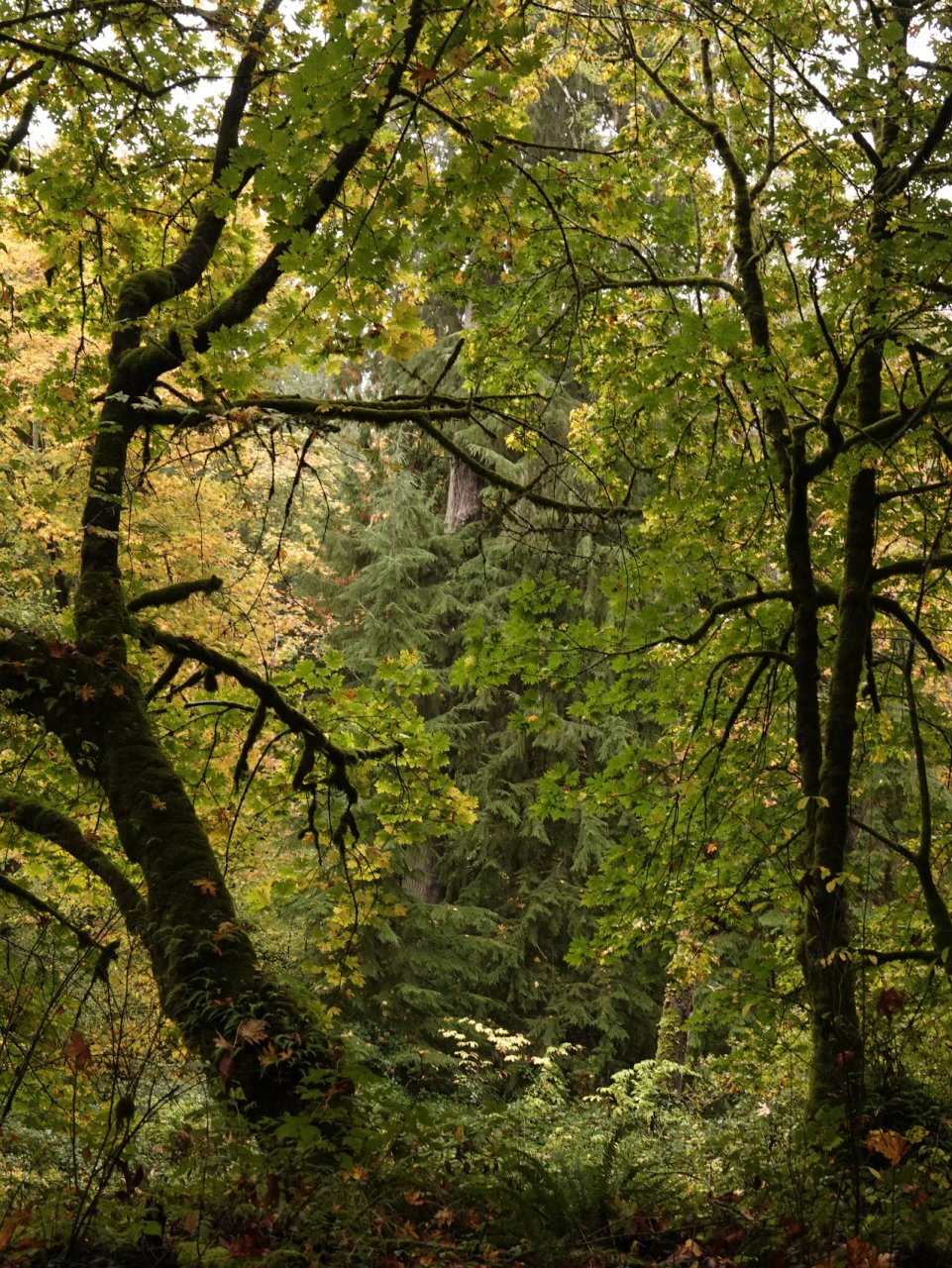 08 Forest at Penrose Point. The raindrops beat a loud, continuous patter upon the canopy of maple leaves. 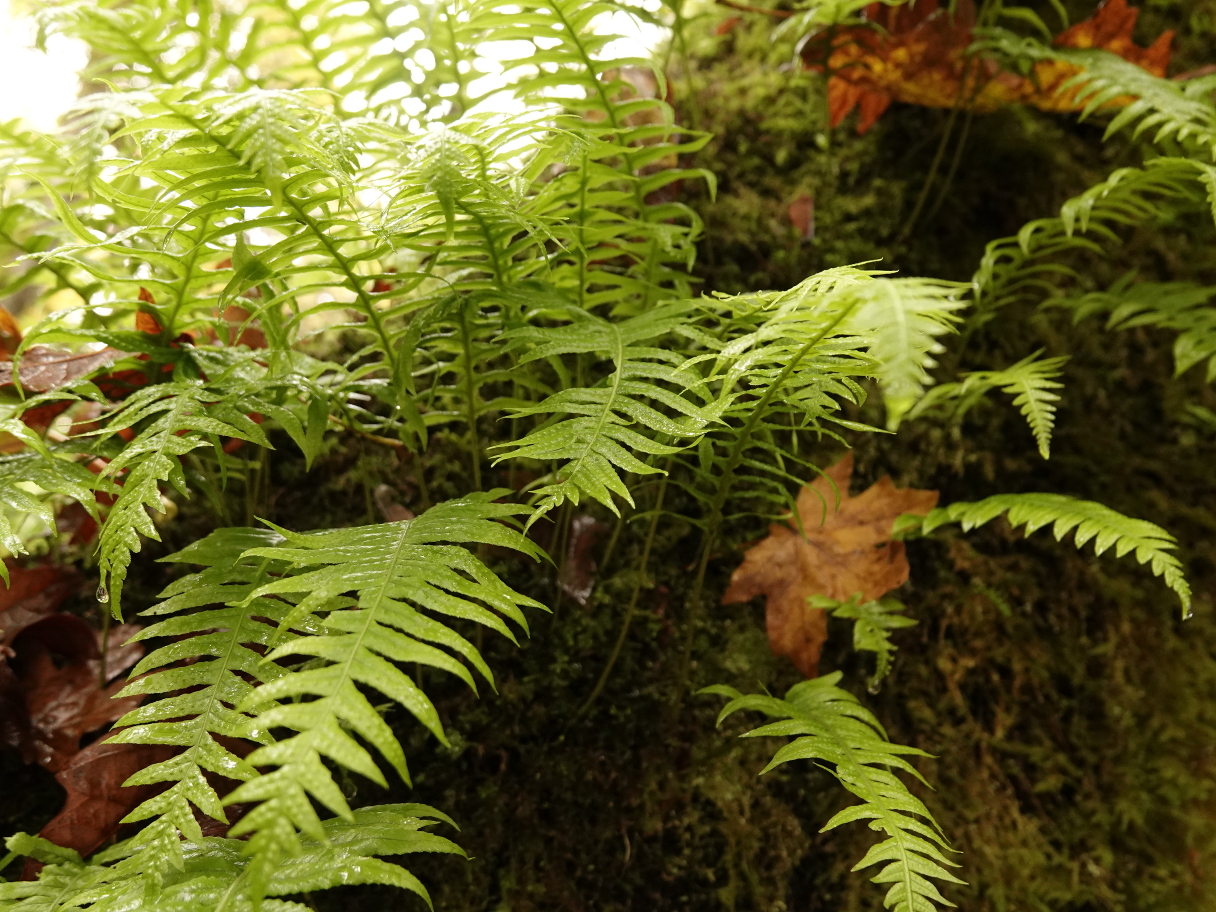 09 Licorice ferns, Penrose Point. This species does not require soil for a growth medium, just the mossy trunk of a maple. 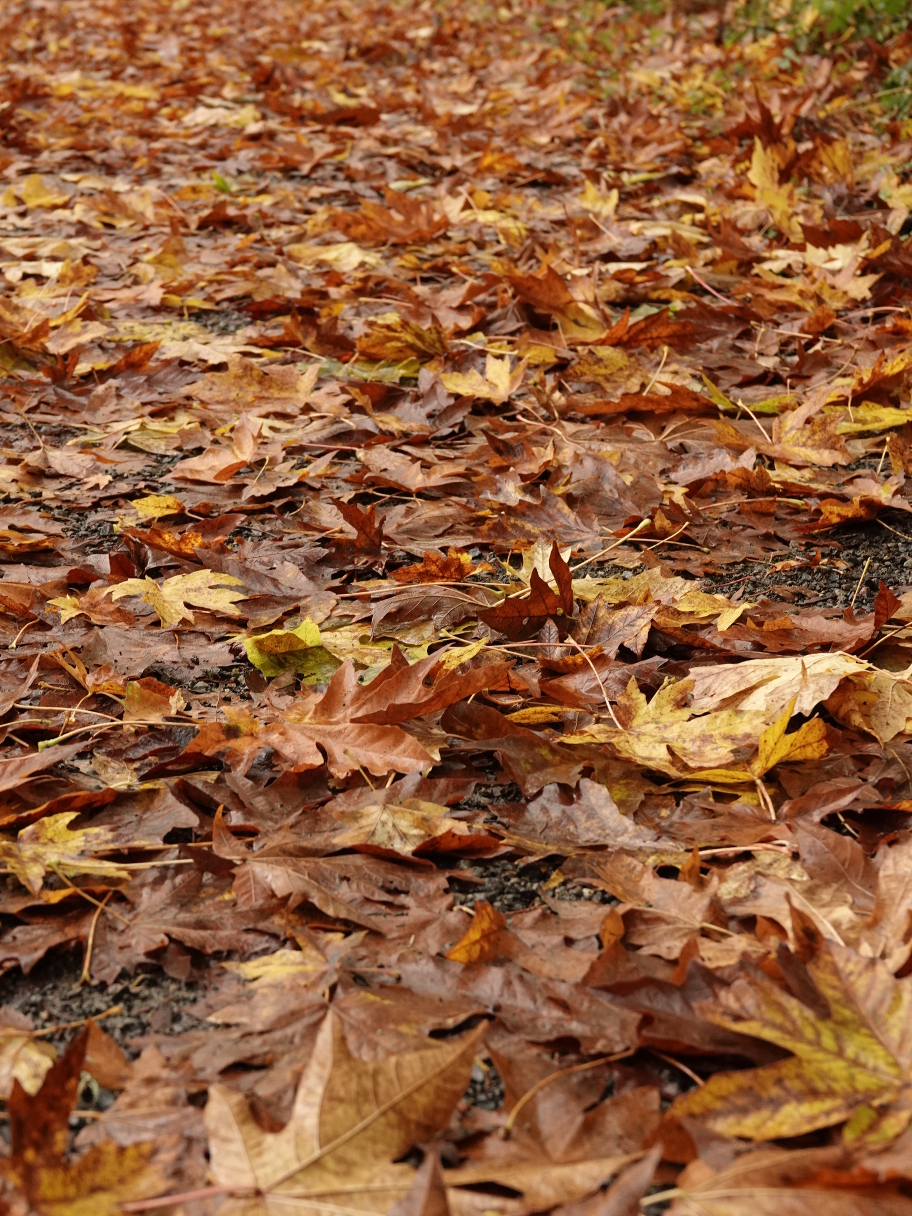 10 Fallen leaves, Penrose Point. The trees produce one last, exuberant flush of color before lapsing into the quasi-death of winter. 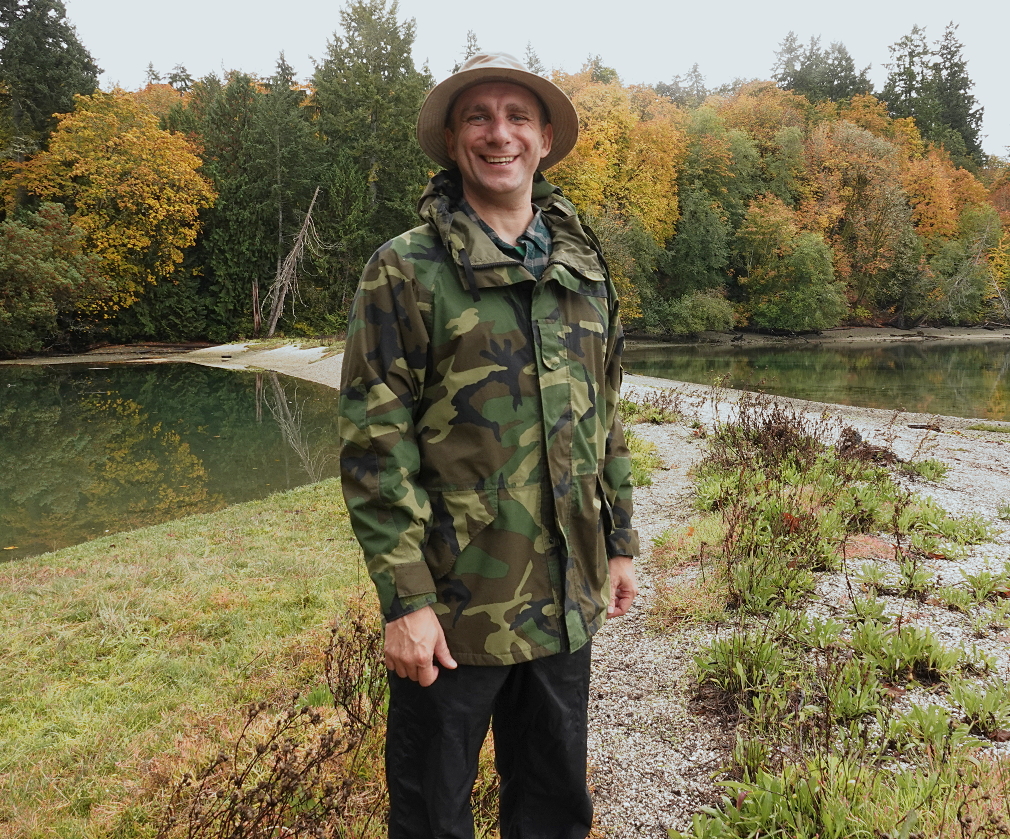 11 Lagoon at Penrose Point. At low tide, it is possible to walk all the way around the point, but at high tide, you have to stick to the forest path.

I don’t know what ancient wind god I offended, but he played me a cruel prank. When I set out Sunday morning, wind was all but calm, to the point I thought the offshore storm might not have any effect at all this far south. No sooner did I clear the shelter of Penrose Point, however, than the wind picked up, eventually reaching fifteen knots sustained, with gusts as high as twenty. In one-to-two-foot quartering seas, I had to deploy the skeg and make frequent corrective strokes to avoid broaching.

No sooner did I reach the head of the inlet, however, than the wind died to a modest ten knots, and the seas flattened out. The sun came out from behind the clouds for the first time all weekend, as if to celebrate my departure. Windsurfers were launching from the beach, but they had already missed the brunt of the storm.

12 Common mergansers, Penrose Point. All mergansers were in their basic plumage, making it difficult to distinguish males from females. 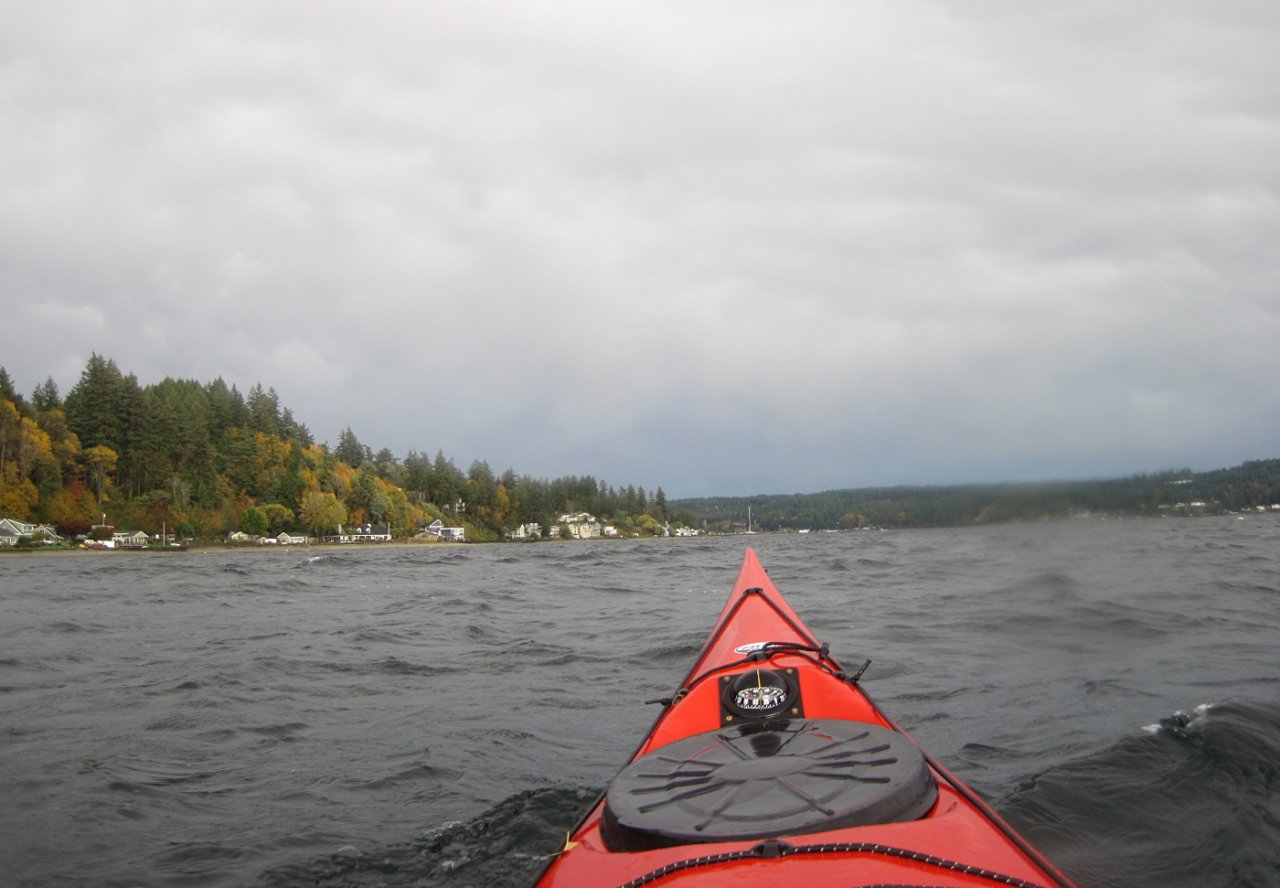 13 North end of Carr Inlet. Here, the seas calmed and the sun emerged.

Back at home, I read reports of wind damage from throughout the coastal and inland waters. The south end of Puget Sound may have been the only saltwater in Washington suitable for kayaking.

Though its shores may be lined with houses, the south sound never fails to deliver a first-rate wildlife experience.

Alex, Thank you for the post and now I have another potential kayak destination.

Take heart in what a guide told me (still raises some hairs on my arm), "If you spend enough time in the wild, you may not see a cougar but you can rest assured they have seen you."

I looked at the launch point on Google Earth - where did you park? Looking from the beach back to the main road (302), there appears to be a pull-over/park area to the left.
Last edited: Oct 26, 2021

Paul, there are actually three parking areas at the Wauna boat ramp, counting the road shoulder as a parking area (which this official website from Pierce County confirms is legal). I've circled them in yellow. There is even an outhouse, but no running water. Parking is free. 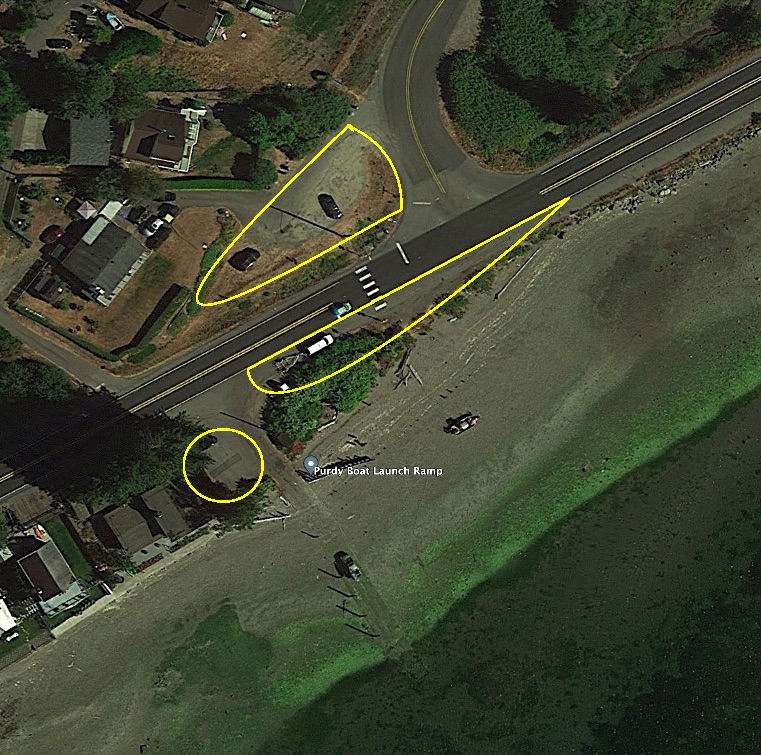 Alex, Thank you. I hope someday you see your cougar - from a safe distance.
Somewhere around here, there's a video of site making/enhancing/repair of camps in the Howe Sound area. Apparently, white the volunteers were working (middle of the day) - not quiet in the dark of night mind you - a cougar came down the trail just to see what was going on. If not in the video, it's in a still-shot of the endeavor.
You must log in or register to reply here.
Share:
Facebook Reddit Pinterest Tumblr WhatsApp Email Link
Top