Been searching and read through lots of forums to find an answer with no luck so far.

The problem: Wife has been building a Coho in the garage, basically following the Apalachicola video for build methods, falling back to the Pygmy manual when needed. Has it to the point of of hull upright and setting the deck on top and aligning the shear panels between hull and deck. Everything seems to align well in the aft end, but the bow ends seems does not align well at all. If the deck and shear panels are aligned centered at both ends then the on the bow starboard shear panel aligns with gaps that, while they can be closed with wiring/taping, are larger than they should be (comparing to the aft portion and other builds I have seen online). The bow port shear panel however does not have enough room to fit between the hull and the deck. If we attach the shear panel to the hull and start to attach it to deck panel at the bow working backward and at the cockpit working forward the shear panel ends up dead vertical between the two areas.

From what I can see I believe that the first bow form in front of the cockpit may have been placed at an angle, port side forward of the starboard side by 1/4"-3/8" before the hull seams were epoxied, causing the port side bow into a sharper curve to the bow as compared to a more relaxed curve on the starboard side.

The $100 question is how to fix this a this point?

My initial thought was to cut through the bottom seam from bow to the horizontal seam at the cockpit, realign the form, re-wire, and see how things align.
J

Things 'not lining up' is a common problem for me; you and your wife are not unique with your build!

Even if the forms are in exactly the right places, it's easy to get a bit of 'twist' or asymmetry in the hull or deck during a stitch and glue build.
CLC mentions it:
https://www.clcboats.com/modules/sh...ickname=stitch_glue&quickname2=checking_twist
Search on 'winding sticks' to get info on checking for twist in woodworking.

Before opening up any seams, I'd check to make sure it's the hull (not the deck) that's the problem.

Also, it is sometimes possible to pull parts together if they don't want to line up. The sooner this is done after epoxy is 'hard' the better, as epoxy does get more and more rigid as the days go by. Sometimes I've glued short sticks to the two parts (sort of like interlocking 'teeth' along the edges) to help force things into alignment. This is a 'second-best' approach, though - it's better if I'm not 'locking in' stresses before the boat hits the water.

Can you post pictures of the problem? I don't recall whether new members here are allowed to post pictures. Posting some appreciative comments in other discussion threads is a common technique to get your message count number increased if that is a requirement for posting pics.
S

Thanks for your reply. I'm entering this game a bit late and trying to help.

Best photo I have that shows the boat as it sits now is linked. The joke between us is if we finish up now by forcing things to fit is that she would be paddling in circles...

The table is level and the hull is shown leveled to the table (as measured at the horizontal panel seams at the cockpit). The square is aligned with the center of the bow seam right at the tip. The deck is aligned to bow and stern. You can see the shear panels as I described, starboard laying at the proper angle, but with gaps, and port sitting almost vertical. Clearly the bow has a twist to starboard at the bottom, but I believe the whole bow it pushed to starboard as well. 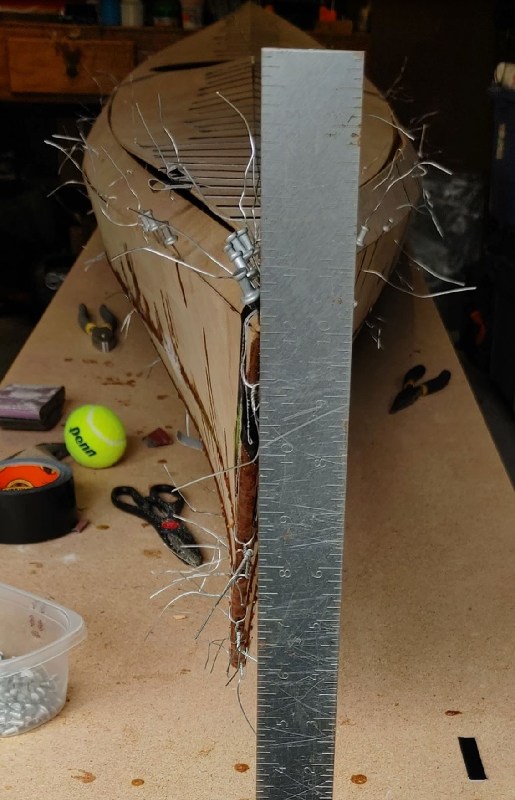 so continuing to guess and taking the chance of being incorrect: I am sort of an alignment fanatic as it gives the most help when putting together awkward shapes, so for me, the fix will be hot gluing or clamping properly aligned [ie to the ctrline drawn] bs cradles all along the yak as an assist and reference for when you stitch together. Likely for me [ie for my prejudices] the fix would be cutting much of the bow seams a quarter the way back, and re-stitching the whole thing together slightly loosly and allowing the cradles and thewinding sticks mentioned by john guiding back to a better reorientation.
And then while stitched, outside gluing the hull seams and the deck seams, so that the whole assembly works together. Then undo sheerline stitches [the sheerline is betw the decksheer panel and the hull sheer panel], inside fillet, add blkhd, and stitch back together.
Then everything will be [more] perfectly fitting as you already did it while unglued - it's one of the beauties of the s&g process - a trial fit.