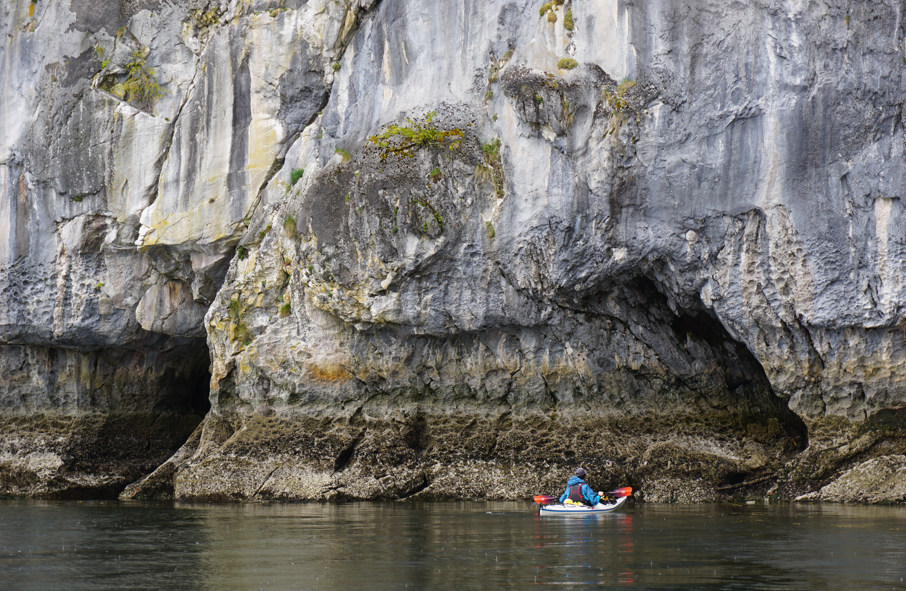 A short paddle to check out the campsite at Drake Island and explore the waters of Quatsino Sound. 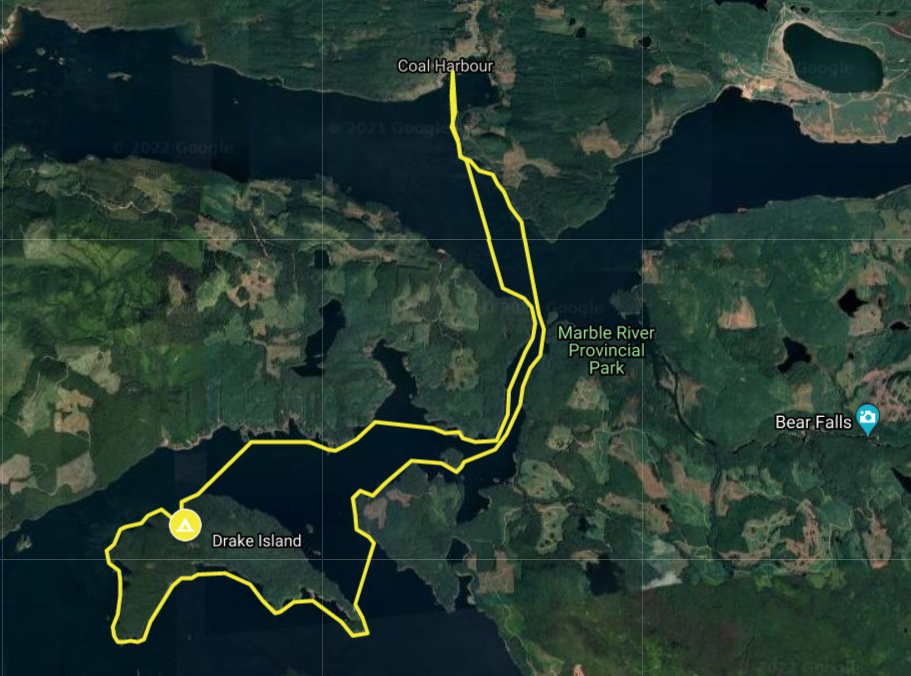 We were running low on time on the North Island and wanted to get out for at least one more weekend to explore. However, the forecast remained miserable anywhere that was exposed, the West Coast remained largely closed by First Nations due to COVID-19, and L had a paper due on Sunday. We were not deterred though and decided we could squeeze in a short overnight trip to the Drake Island area in Quatsino Sound. Neither of us had ever paddled in the sound and were keen to check out Quatsino Narrows and the small settlement of Quatsino. There were a few BCMTN campsites in the area, and we would decide as we were paddling where to spend the night.

This ended up being a fun exploration in otherwise "meh" conditions, but it was a short, grey, industrial trip.

After work on a Friday, we drove the short distance out to Coal Harbour from Hyde Creek and parked our truck at the Air Cab floatplane facility. We chatted with the owner there before using the ramp to launch our kayaks. For a small fee you can park your vehicle and use the boat/float plane launch at the floatplane facility (note - you must bring cash).

Though the community of Coal Harbour was initially founded as a coal mining community, it has a storied history. In the 1940's the area served as a WWII RCAF base with over 700 residents, later claiming the title of the last operating whaling station in North America, which closed at the end of the 1960's before transitioning back to mining, copper this time, until the mid 90's. We were not in a rush as the current through the narrows would be quite minimal and was in our favour, and it was interesting to talk with the small group of locals who continue to call Coal Harbour home.

Crossing Coal Harbour the wind remained calm and it sprinkled on and off. We hit the far shoreline and paddled past some great sea arches and geology not typical of most of the BC Coast: limestone. Limestone is dominant in much of this area, so much so that Drake Island was once known as Limestone Island. The shoreline looked quite fun to paddle all the way to Hankin Point, but we thought we would cross directly to Sorenson Point on the far shore and paddle this shoreline on our return trip the following day. 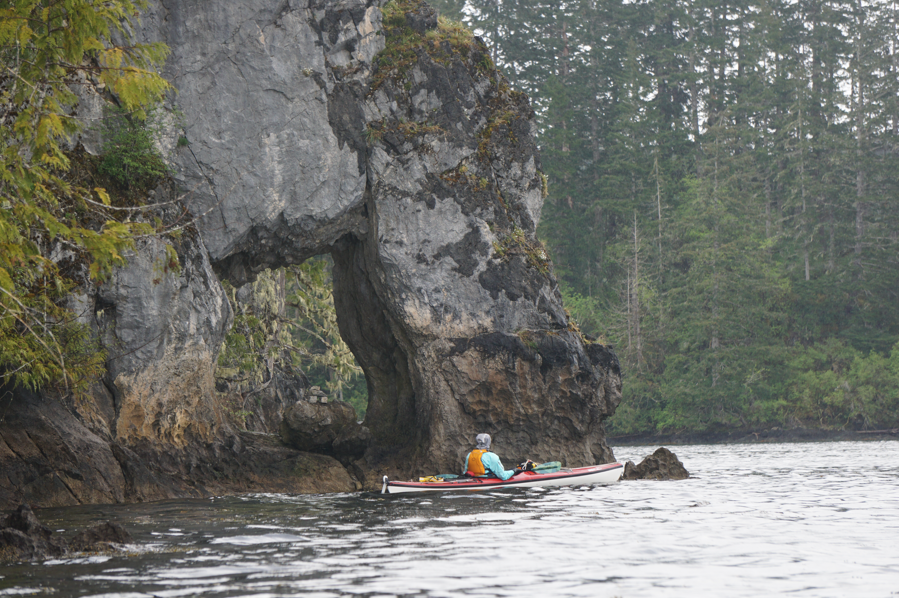 We continued across Holberg Inlet and into Quatsino Narrows where we stuck to the west shoreline. We were hoping to see some good intertidal life, as is typical of areas with strong current, but the tidal exchange was weak and the tide was not low enough. The current was minimal, but still in our favour and we made good time. Despite the lack of marine life, the shoreline was quite pleasant through the narrows and clouds clung to the surrounding hills, making for great paddling.

Around Ohlsen Point there was minimal turbulence and we enjoyed the free ride towards the settlement of Quatsino. We continued our paddle along the Vancouver Island shoreline, crossing Hecate Cove and then cruising along past the waterfront homes to Sherberg Island. There were some gorgeous properties and some great looking fishing lodges scattered along the shore - aside from the heavy industry, this is a beautiful area!

From Sherberg Island, we took one more jealous look at the comfy and cozy homes with wood fires burning and began our crossing over to Drake Island. We had decided it was too far to push to Undercover Cove (BCMT campsite) and some of more pleasant looking beaches near Quatsino Provincial Park. It was turning to dusk, raining softly, and we were keen to set up camp as soon as possible - we were not expecting to find a luxurious site at Drake though. 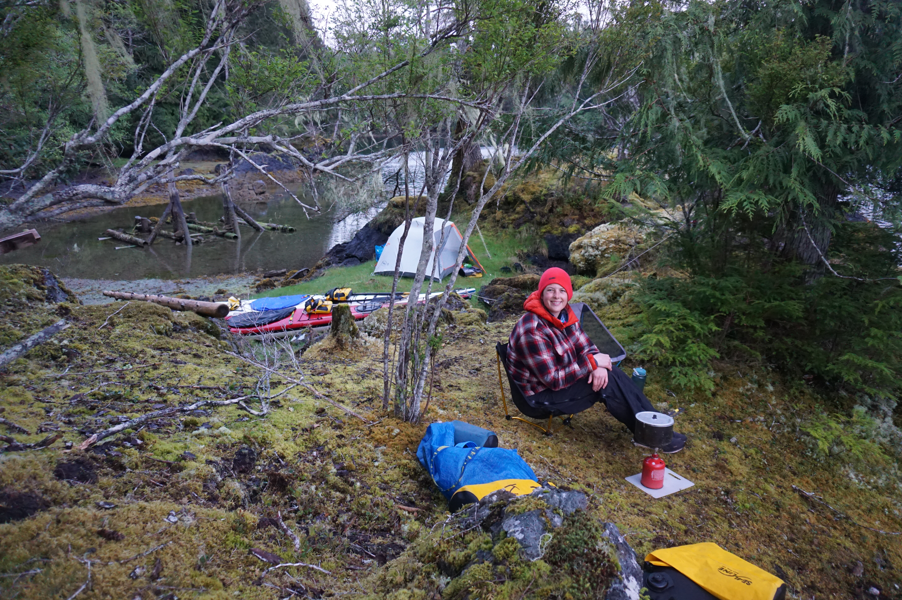 The BCMT campsite in Pamphlet Cove on Drake Island - I would recommend putting the tent where L is sitting or in the forest, and NOT on the intertidal grass!

After a non-eventful crossing, we cruised along the shoreline of Drake Island which offered more interesting limestone shoreline to paddle past. After only a few minutes though, we turned into Pamphlet Cove and began looking for the campsite. A classic white BCMT signpost sat at an angle on a low grassy bluff feature, implying this was the site. The shoreline access was tricky though and we could not see an easy spot to unload and store the boats, so we continued slightly further into the cove to two small islets with a large, low gradient intertidal area. 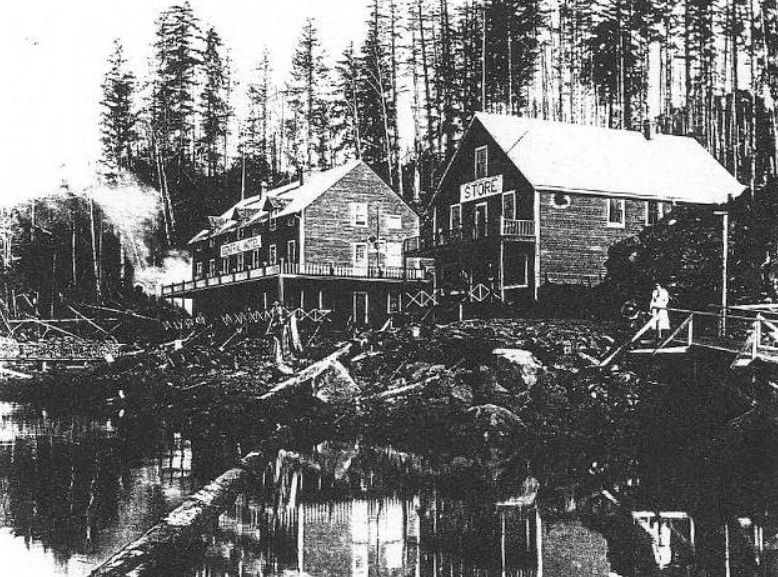 Frigon's Hotel in Quiet Cove on Limestone (Drake) Island. This is the cove now known as Pamphlet Cove where the campsite is located.

This is the site of Frigon's Hotel which operated on Drake Island in the late 1890s and early 20th century. Much more interesting history about Drake (and many more North Island subjects) can be found here: Undiscovered Coast. This site is connected via rough trail to the BCMT signpost we had just paddled past. There is easy access to the forest, but windfall has made many of the trails challenging to follow (I believe this has been cleaned up as I brought it to the attention of BCMT). We chose to pitch our tent near a mossy bluff on the islets, figuring we had more than enough room above the high tide at 3AM, and set out to explore the island before dark. 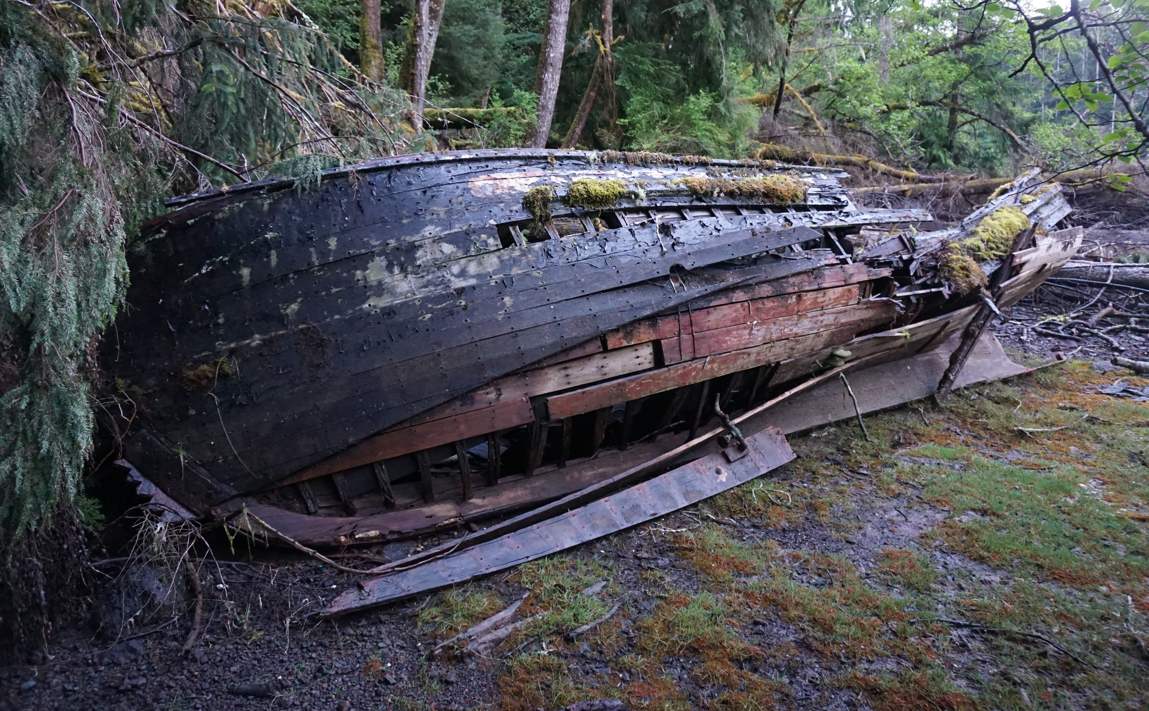 A shipwreck in Pamphlet Cove.

L and I cleared some brush and followed the trails around the site. There is a lot of room here for groups and the site even has a green throne! In the summer I think this would be a great spot, however, on a cold, wet, grey evening in spring, it seemed a little dismal. We returned to our lovely mossy sitting area and cooked up some fresh pasta for the evening. It was already quite late and we drifted into an early sleep, mindful of the high tide at 3 AM...

...my watch alarm went off around 3AM and I peaked outside - luckily the tide had reached its maximum and we were still dry. Even luckier, it was completely calm in the bay, as even the smallest of waves would have soaked us! 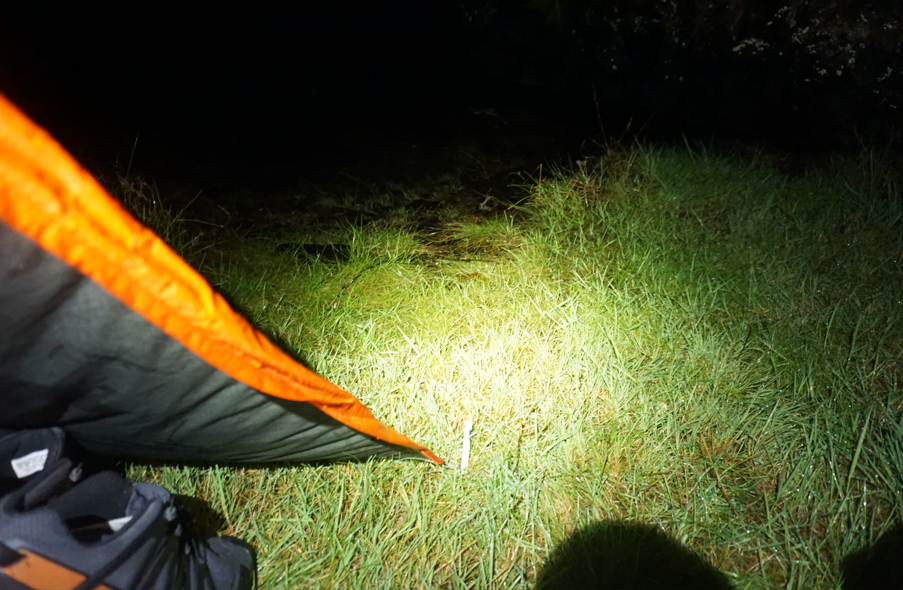 Luckily for us it was a calm night! This 3AM wake up call was the closest the tide would get. It's hard to see, but the ocean is just above where the camera flashed and only a foot or so from the tent!

After the 3 AM wake-up call, we slept in a little bit, but still could not linger if we wanted to stay on schedule and give L enough time to get her school work done. It was another calm day and we decided to continue with our plan to circumnavigate Drake Island. We packed up the sopping wet gear - overnight sprinkles and west coast condensation with no wind had left everything soaking despite Big Agnes's best attempts. We tried our best not to get too mucky on the beach.

You can never have enough IKEA bags to protect your gear and we took full advantage! 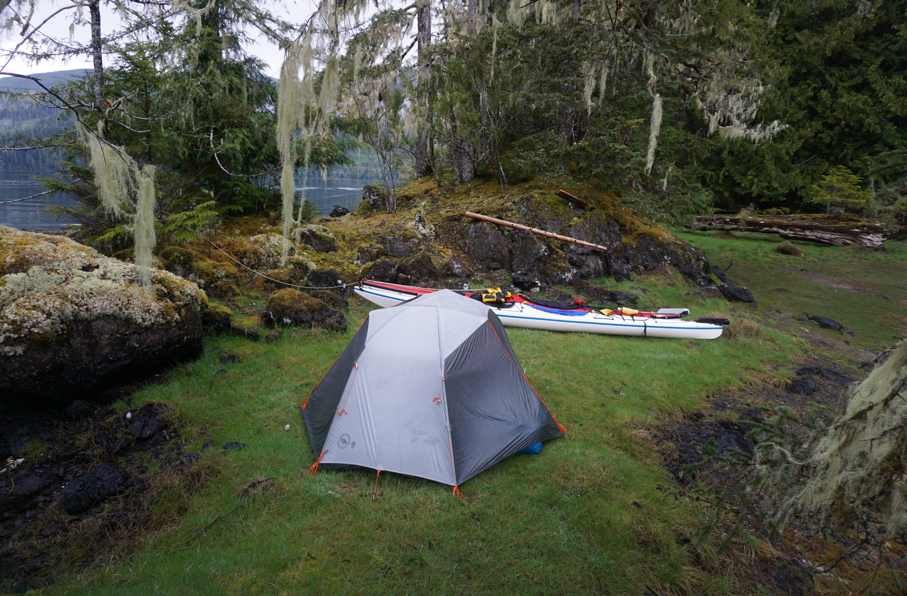 We just barely stayed dry through the night, but the nice soft grass was worth the 15 minute ordeal! 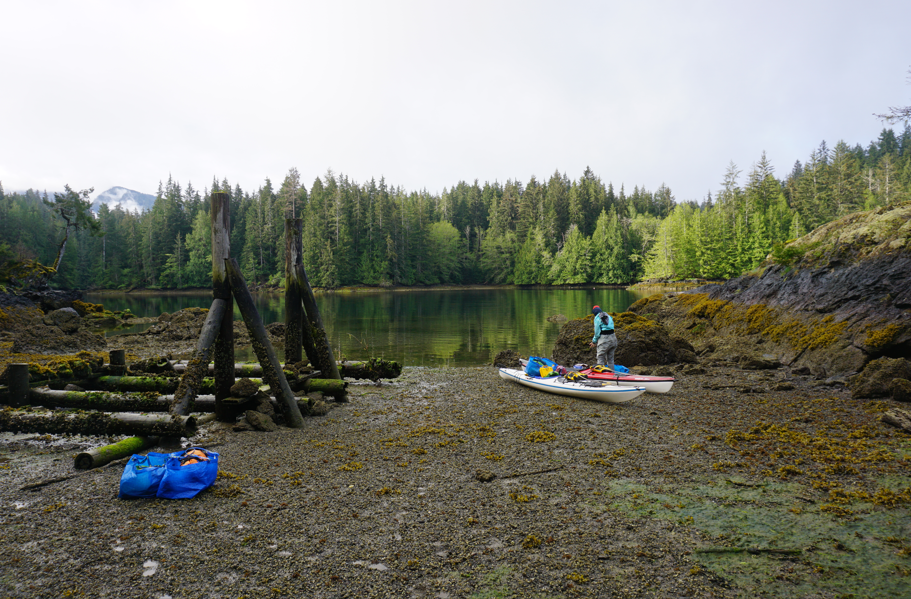 The remnants of Frigon's Hotel and a slightly mucky launch site.

Leaving the cove, we paddled east along the shoreline of Drake Island. Small islets, kelp forests, and limestone shore made the paddle interesting and quite pleasant - until we hit Holloway Point. Although the shoreline continues to be pleasant and even opens into a large bay backed with a pebbly beach, once we rounded the point we could both see and hear the massive logging operations in Kultus Cove. A massive barge was being loaded with fresh logs and the noise was beyond unpleasant. The scene itself was also depressing and turned a pleasant morning into a gloomy one.

We hastened our way our Lakken Point and away from the noise. Once we rounded the point, we entered a different world of silence and once again slowed down to enjoy our paddle. The current in Quatsino Narrows was going slack and switching to our favour, so we crossed back to the Vancouver Island shore and paddled behind Quattische Island, where some fun current was already beginning to build. We let the current suck us into the middle of the channel and then paddled the eastern shoreline, keeping an eye out for anything interesting.

After paddling back through the Narrows, we thought about a short side trip to Varney Bay and Marble River Estuary, but felt pressured to get back in time for L. We managed to do a hike in Marble River Provincial Park, out to Bear Falls, earlier in the year, but the trail has been heavily damaged by a wind storm. It is being repaired. This is a pretty little park on the north island and great for a stop if you are heading out to Port Alice. 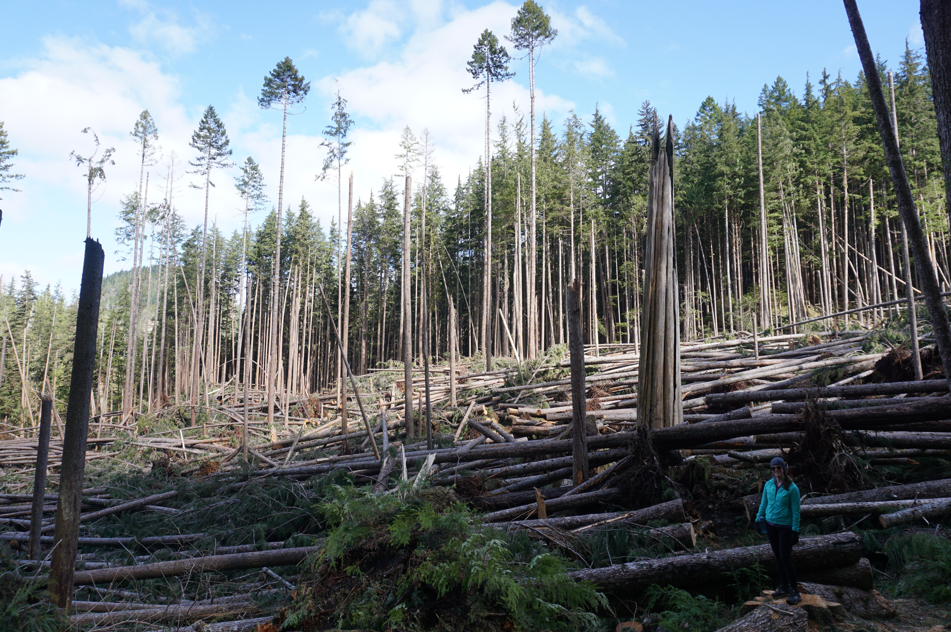 The trail to Bear Falls in Marble River Provincial Park - heavily damaged by a wind event in winter 2020/2021.

We skipped doing a loop of the small First Nation reserve of Maquazneecht Island as the current was pulling us into the middle of the channel. Some small rips were just offshore of the island and running the width of the narrows. The water was slightly unsettled, but the noise from afar was much worse than the reality (as is often the case). It was raining again but the water remained very glassy once we had put some distance between us and the narrows. 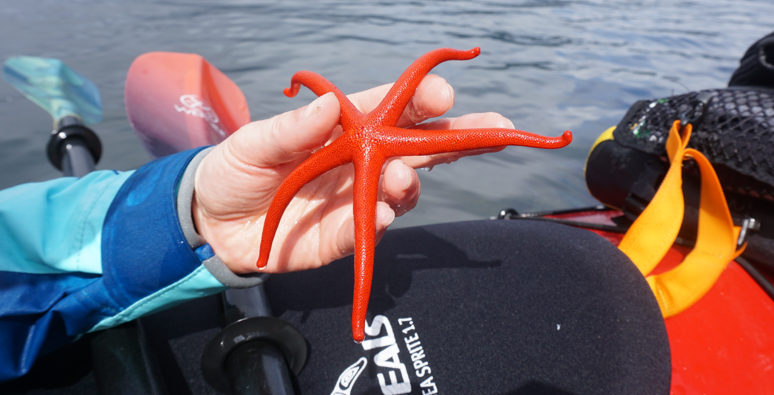 We crossed back to the shoreline near Hankin Point and paddled past more limestone cliffs and cool features. From here it was a simple paddle back to Stewart Point and across to Coal Harbour. We could hear a humpback somewhere out in the inlet, but only caught occasional spouts. Unloading the kayaks went smoothly and we were fortunate enough to witness how they get the floatplanes out of the water - picked up from the ramp with a custom forklift.

We ran into a group of sea kayakers dropping a car in Coal Harbour and returning to Telegraph Cove to paddle the Cape Scott Marine Trail, something L and I had done in 2017. This is a world class sea kayaking route. Aside from one solo paddler we met in March in Telegraph Cove, these were the first sea kayakers we had seen all winter on the North Island. It is remarkable how quiet this area is despite how much it has to offer.

If you are pushed for time or just want to have a more relaxing trip I suggest checking out Drake Island, however, I would not recommend making an extended drive just for this trip. Instead, consider a different area for a short trip or add a couple of days to your plans in this area and make your way further towards the open coast. 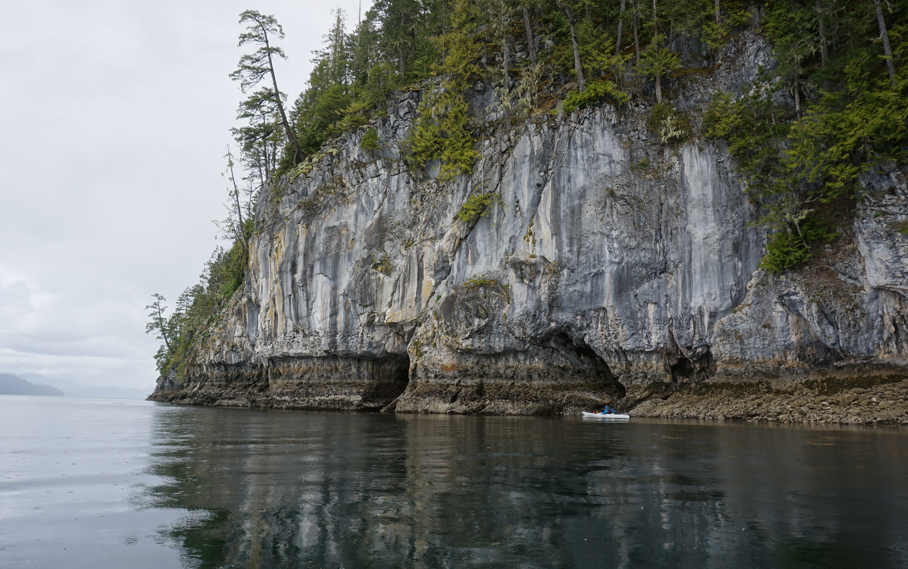