In February 2021 L and I moved to Hyde Creek, northern Vancouver Island, where we spent the winter and spring living in a cabin on the beach, working from home, and paddling almost everyday.

We spent many weekends out camping in the kayaks, and it was great to revisit places that we had last paddled in 2017, and to explore new areas. Back on our first kayak trip ever in May 2017, our days looked much different: during 2021, we frequently travelled in a weekend what had previously taken us nearly a week in much better conditions. Cool to see a progression in fitness, speed, and comfort in rougher waters. As with a previous crossing of Johnstone Strait, this trip would involve some of the most challenging conditions we have paddled on the inside coast (aside from tidally rapid areas).

We had been in Hyde Creek since the beginning of February and had done numerous day trips and afternoon paddles and training, but had yet do an overnight trip. The weather was surprisingly nice but the wind blew consistently up Johnstone Strait. It was entertaining hearing the "hurricane force" wind forecasts, but didn't make for ideal paddling. We went out a few of these days to paddle around Haddington but never further. In early March I hurt my foot, and walking was out for at least a week, but by March 19, we had had enough and decided to do a little loop through an area of the Broughtons we had previously never visited: Baronet and Beware Passages, full of rich First Nations history. 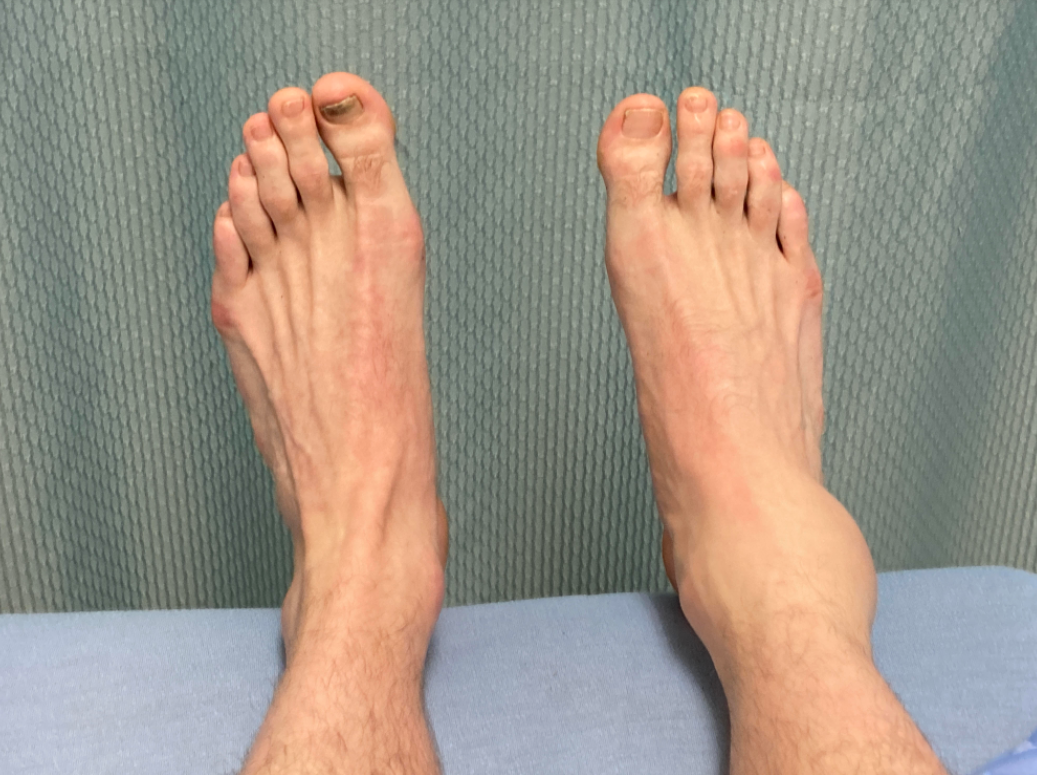 At the hospital again, this time with what turned out to be just a sprain!

We left Telegraph Cove around 430 PM after taking an early leave from work. The wind was blowing stiffly from the SE, but the current matched its direction and the water was calm. As we were unloading the kayaks, a solo paddler introduced herself and we launched the boats together. She was just out for an afternoon paddle and we went down to Blinkhorn with her into the wind and then watched jealously as she surfed back on her own.

By the time we reached the Hanson shoreline, we had been blown considerably west and lost a lot of forward progress. It got dark and we pulled out the headlamps. We were heading for Big Bay, one of four campsites on Hanson Island open to the public. We arrived in the dark and set up camp - there were even tent pads here, but given the season, everything was in disrepair. I believe this campsite sees a lot of traffic in the summer.

Sadly, a wind event had destroyed the trail to a large tree that we had read about. It looked fairly recent (this year), but we were uncertain of the timing. We set camp quickly and fell into a deep sleep.

In the morning light, L tried to bypass the windfall and find the trail to the tree. My foot was too sore to bear any weight, so I hobbled around on the beach packing the boats. We left Big Bay as strong SE gusts blew past the entrance. The water remained suspiciously calm though.

We paddled along the shore of Hanson and then made a crossing to Cracroft Point. We were hesitant about the conditions we would find as we were far from slack tide, but we only encountered calm water. The wind in Johnstone Strait was howling, but we experienced fairly calm conditions in Baronet Passage. We had planned things well and had a current in our favour.

As we ripped through the channel, we marveled at the vast array of intertidal species. Amazingly, this was our first time seeing a painted star, and it is still one of the prettiest individuals I have ever found. All the sea stars here were healthy and did not show signs of wasting disease. 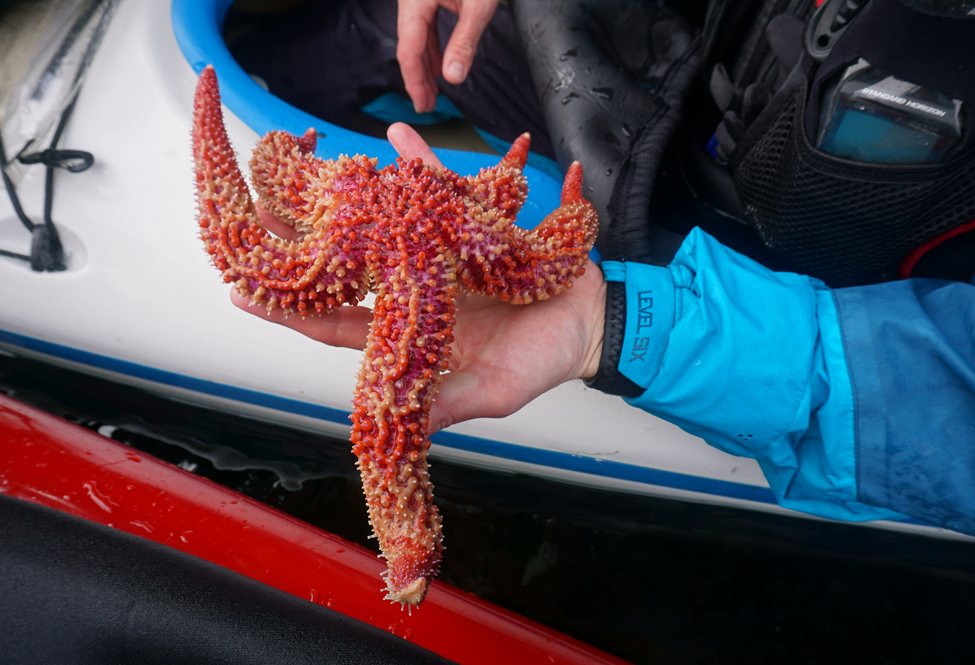 A gorgeous painted star we found in Baronet Passage.

We made very fast time through the passage despite the headwind. We ducked into the islets around Klaoitsis Island for some shelter from the wind, and then landed at the main midden for a snack break. the beach here is stunning and it is amazing to think of the village sites that existed in the area. 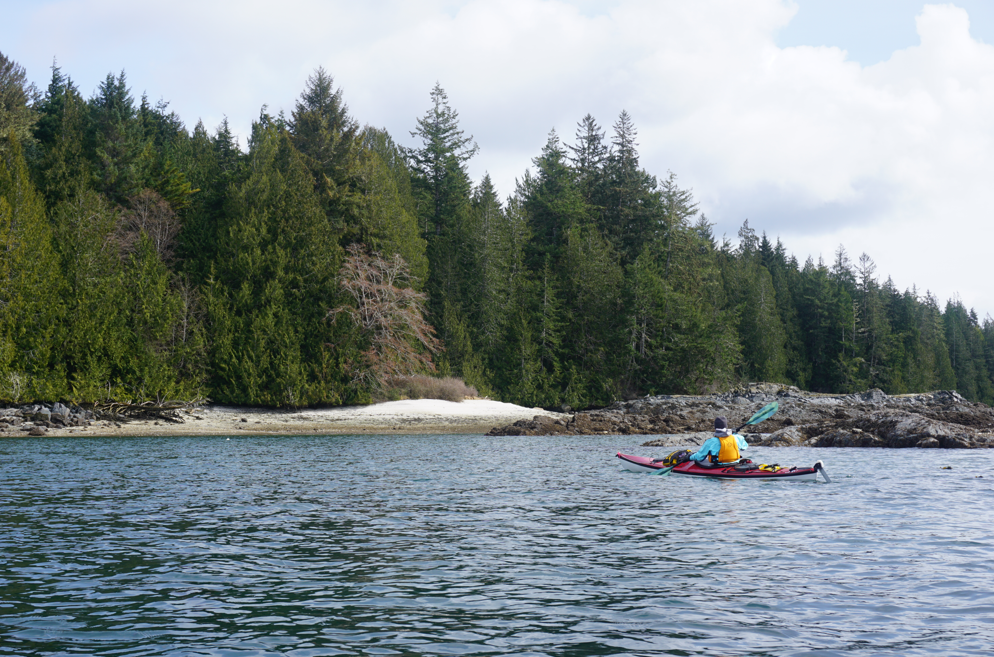 L approaching the midden beach at Klaoitsis - we stopped for a quick rest but did not linger at this culturally sensitive site. Camping is not appropriate here. 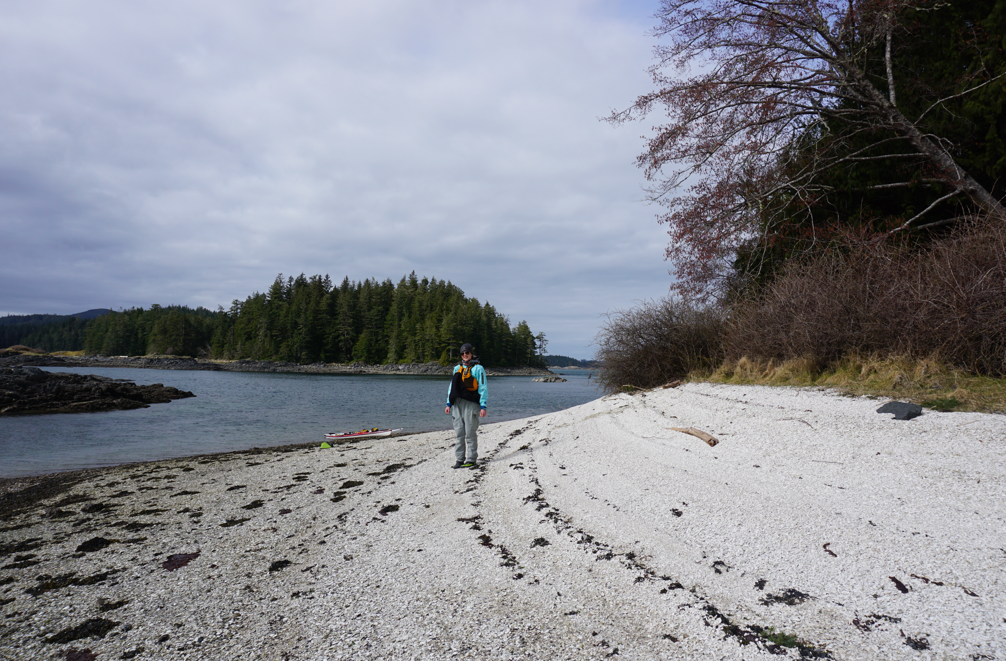 L on the beautiful midden beach at Klaoitsis Island.

We left Klaoitsis and crossed over to the village site of Kalugwis (or Karlukwees). This midden is prominent even from kilometers away. Before visiting the village site we wanted to find the panel of pictographs on the cliffs nearby. L quickly located them and we stopped to photograph the rock art. This is an extraordinarily detailed pictograph panel and very impressive to behold. 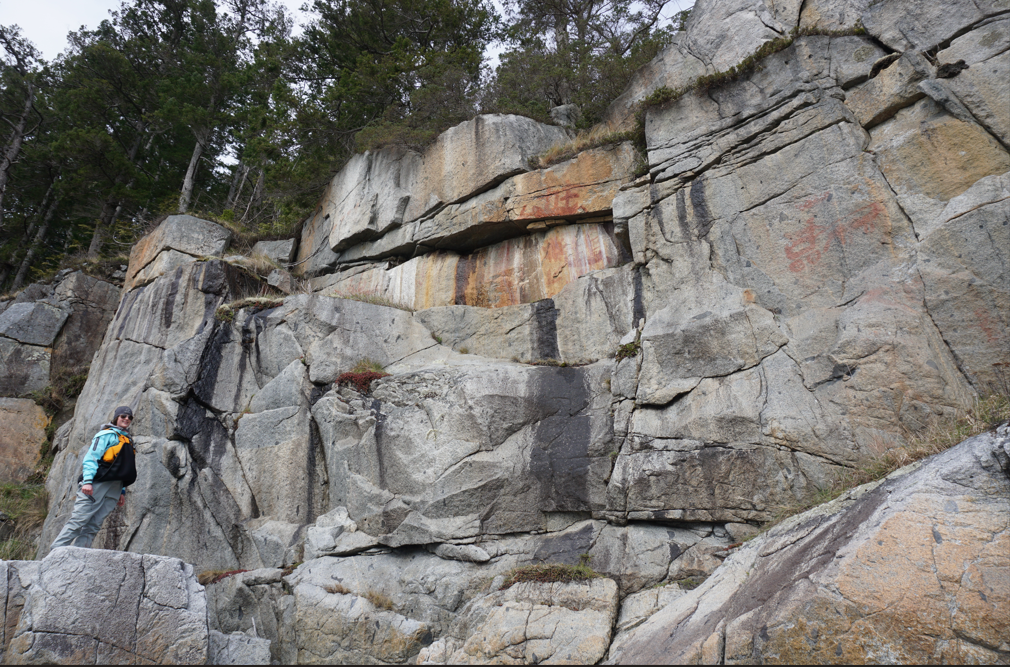 Exploring the rock art outside the ancient village site of Kalugwis. 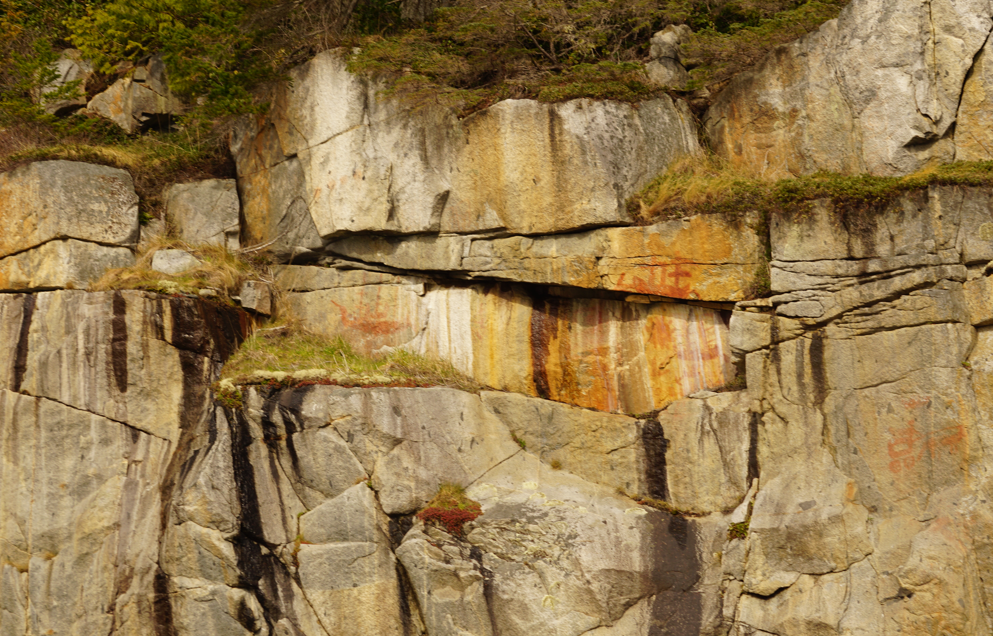 We left the rock art site and continued on a short distance to the village site. The beach here was an amazing mix of sand, shell, pottery, and glass. Photographs and paintings by prominent Canadian artists depict the lively and thriving village site. I had just finished reading Klee Wyck by Emily Carr, where she speaks of her time in the villages in this area. This would have been an amazing place to live. 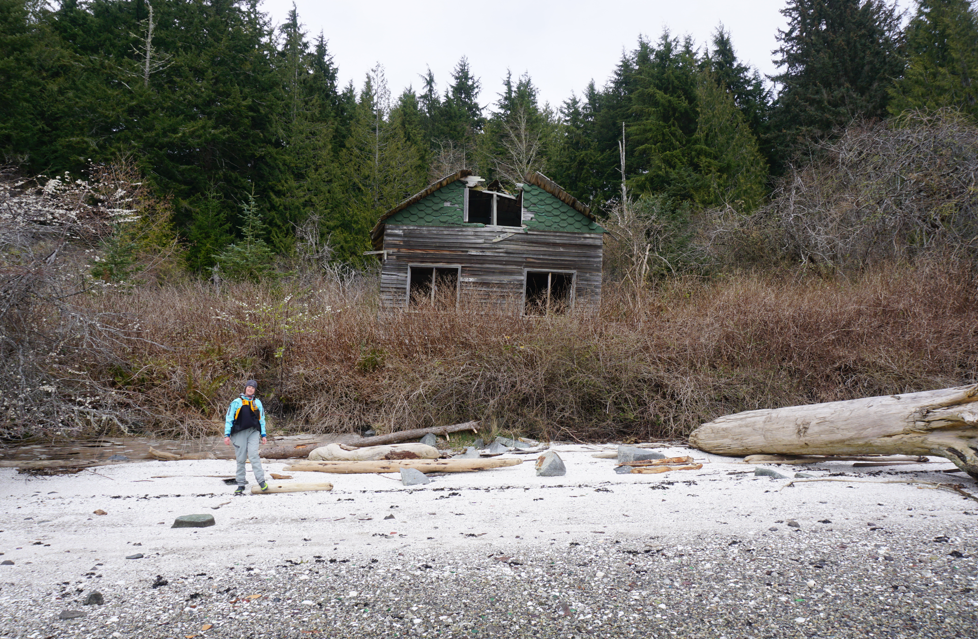 Unfortunately, as with many old village sites on the coast - as well as industrial sites - invasive species are taking over the landscape. In this case, many buildings and artifacts are being overrun by invasive plants. If you visit these sites make sure to clean yourself, your clothing, and your gear before moving on - especially if you are camping! 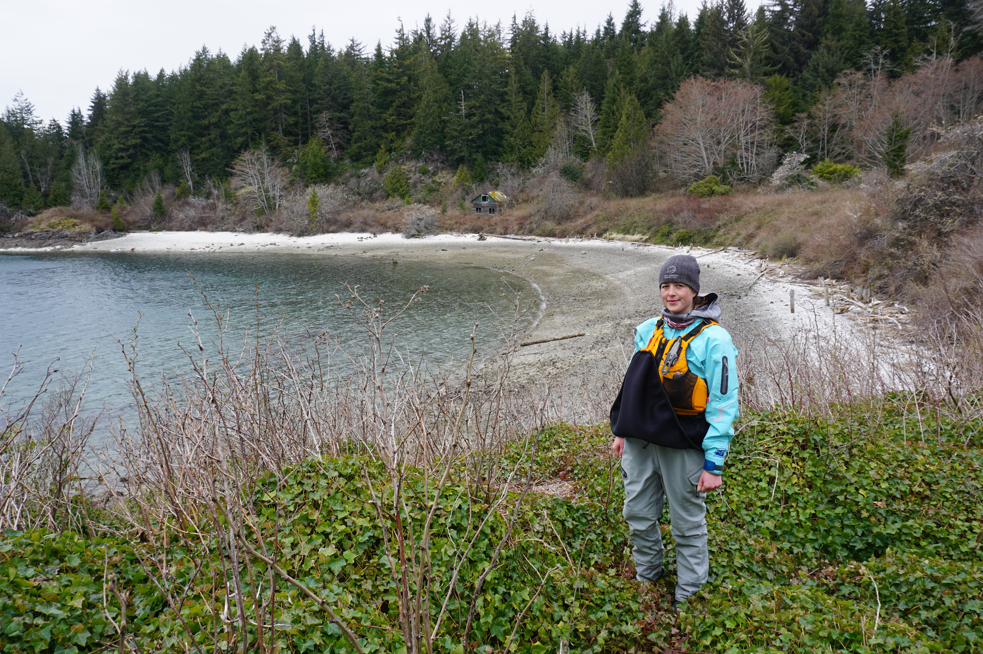 Overlooking the ancient village site of Kalugwis and the massive midden that bears testament to thousands of years of continuous occupation.

Below are some photographs and paintings of the village of Kalugwis from the early 20th century. 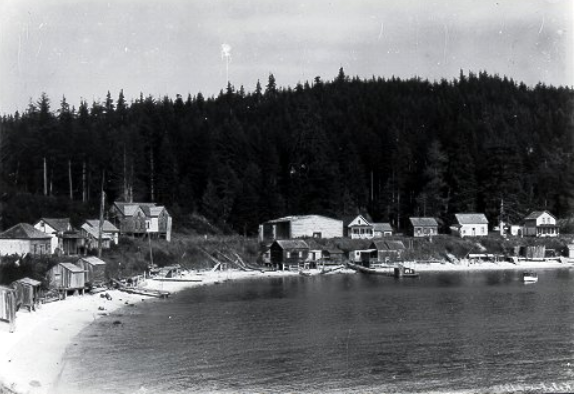 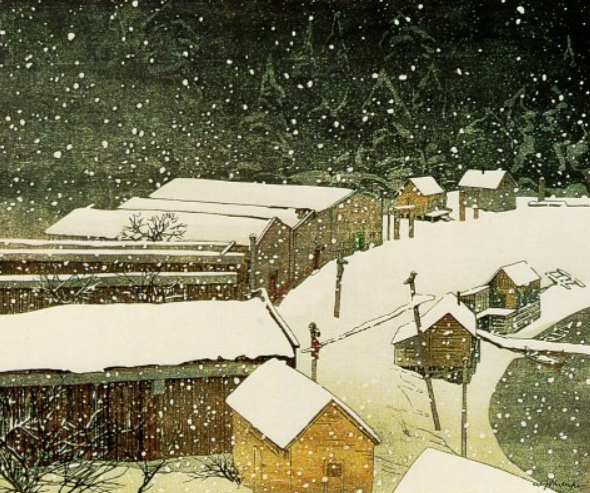 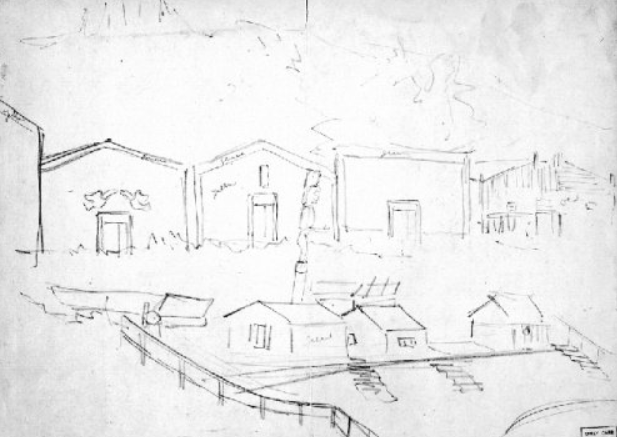 It was still very windy when we left Kalugwis, and the wind had turned down Beware Passage to blow directly in our face again. We crept along the Turnour shoreline. We found a very interesting pictograph that we were not expecting. It appears to have vulva imagery which is commonly found in rock art from other cultures. The shoreline of Turnour was interesting to paddle and the small islets in Beware Passage provided great scenery. We paddled behind Cook Island before crossing from Mink Point to Harbledown Island. 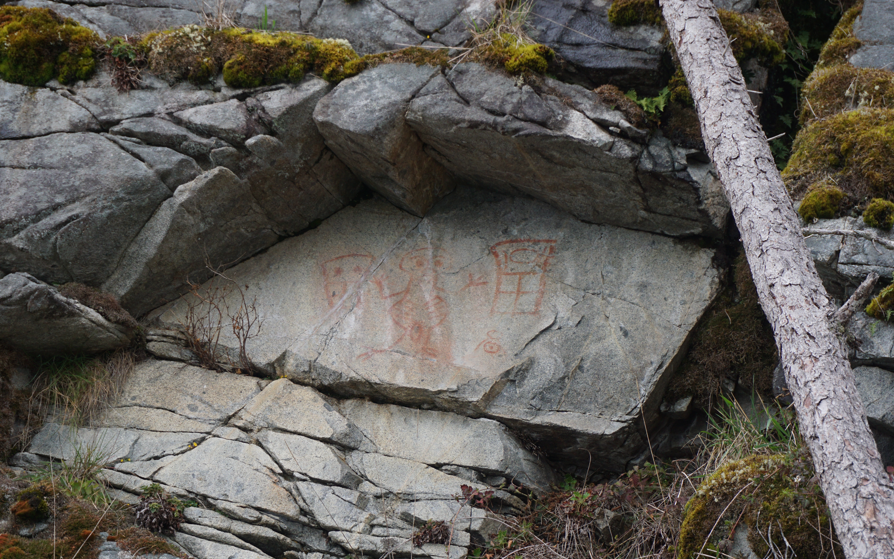 An interesting pictograph in Beware Passage with what appears to be vulva imagery.

A windy stretch of shoreline awaited us around the corner, but we continued on to New Vancouver. We had been told by a friend that we would be welcome, but that was before COVID. It was getting late during a pandemic in winter and we did not want to intrude on this peaceful and beautiful community. We waved at a few people on the dock and continued on our paddle. We could return another time to visit. 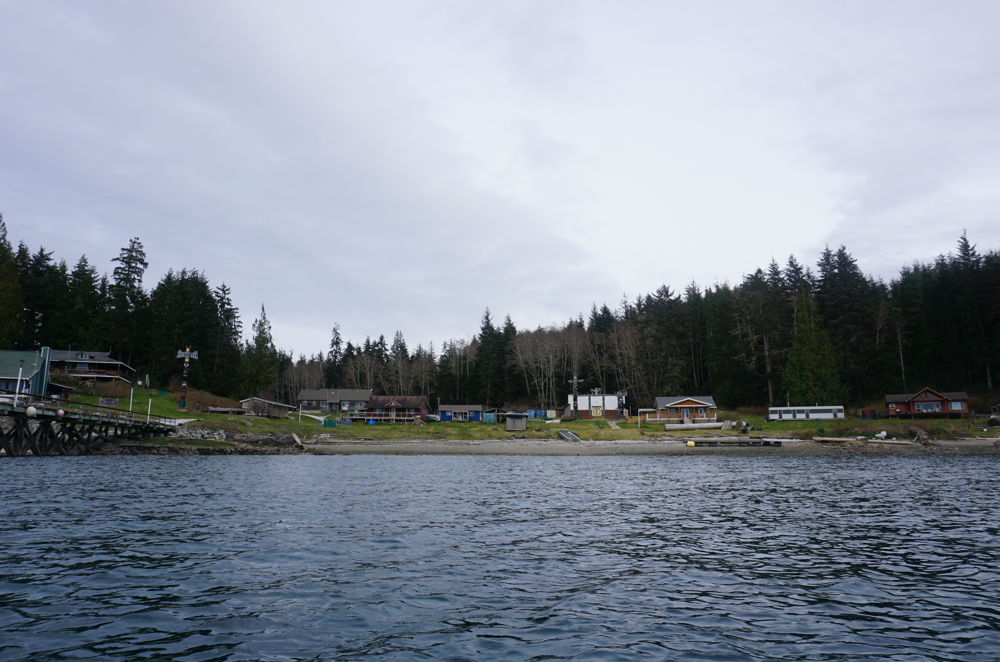 Paddling past the thriving community of New Vancouver (T'sadzis'nukwaame). 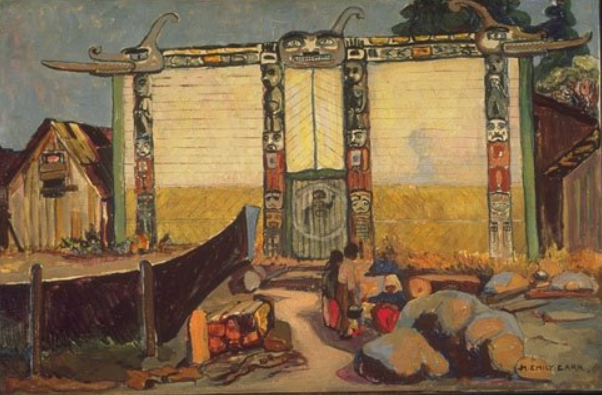 From New Vancouver, we crossed into the beautiful island archipelago of the Carey Group. Unfortunately this area is spoiled by a fish farm, which hopefully will be removed soon. We paddled around the islets, doing our best to avoid the views and noises of the factory and continued around the north side of Leone Island and into the channel between Leone and Berry Island. Although we had paddled this lovely passage before, we had never camped here.

We found a great site at the location listed as Lesser Berry Island on BCMTN. Unfortunately, a lot of the other possible campsites in this area are in view of the fish farm. We had an easy landing and pulled our boats up onto a small grassy islet, where we found flat camping. The rain held off and we enjoyed a great evening camped out.

Easy and pleasant camping on a small islet in the channel just north of Berry Island. There are a few options in this channel.

L had been working on some school the entire trip and was keen to get back a bit early, so we elected to head home via Whitebeach Passage and cross Johnstone from Hanson and back to Blinkhorn again. The radio was calling for gale force winds in Johnstone Strait. We should have paddled north of Hanson and crossed from Weynton Island, where the wind usually drops, but we did not want to wait for the currents in the Plumper Group (which we had previously lost a battle too) to change in our favour.

We left our campsite and chose to skip the pictograph site at the northern tip of Berry Island. It was windy and we wanted to head home. We had visited this site in 2017 and it is beautiful. We crossed from Berry Island to Mound Island in a strong wind and ducked into the shelter of the small bay on the west end. There is a beautiful midden beach here, but camping should be avoided at the request of the local First Nation. We paddled out to Blackfish Sound via the gorgeous Whitebeach Passage. Be aware, currents move quickly in this area.

We had never paddled this section of shore and stopped to see the fossils at Red Point beach. Very cool! 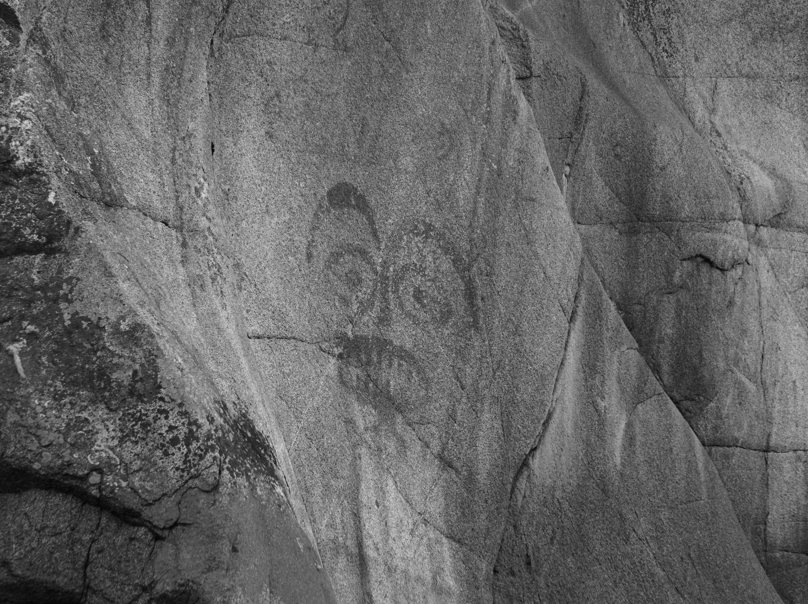 "The Chief Bathing" pictograph on a prominent cliff on Berry Island - this was the first pictograph L and I found while kayaking. Photo from 2017. 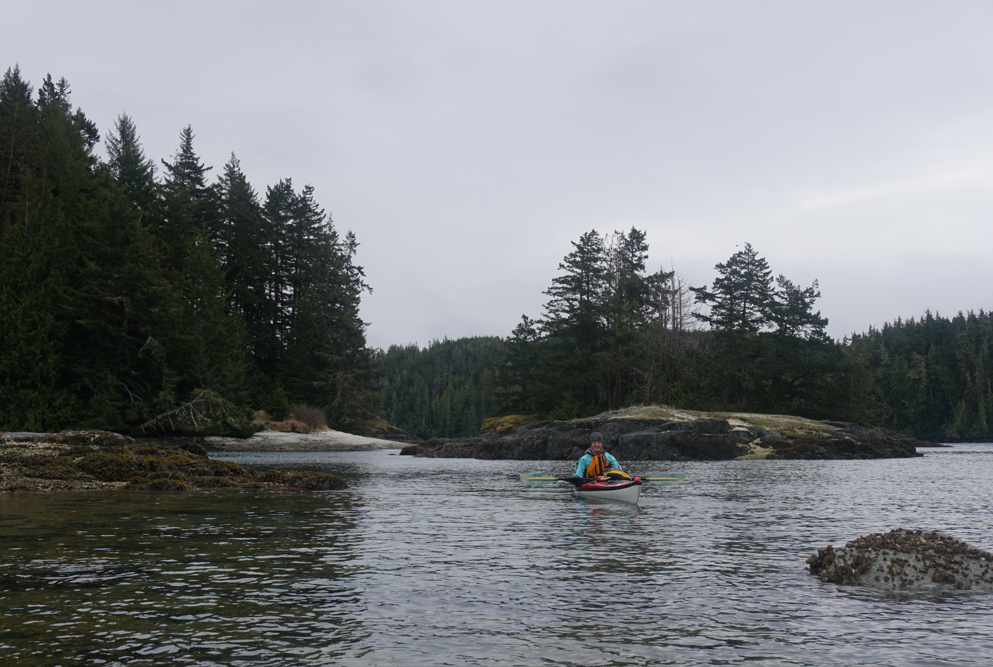 L in front of the large midden site at Mound Island. This is a spectacular location, but should be avoided as a campsite for cultural reasons.

Leaving Red Point, the wind blew strongly out of Parson Bay and we paddled hard to the shelter of Parson Island. Blackney Passage was near slack, but still pushed us a bit off course to the north. The wind was completely dead in the passage, but we could see and hear chaos in Johnstone Strait. A wild ride was ahead. We should have changed course and headed north around Hanson, but we were stubborn - the waters beyond the point looked fine.

The SE wind that had been blowing for the past four days had created massive swell in Johnstone, that was stacking up and rebounding into the SE tip of Hanson Island, directly where we were paddling. Enormous rebound waves collided with incoming swell creating challenging conditions. We tried to stay offshore, but the SE wind pushed us back into Hanson Island. These were by far the largest waves we have encountered on the "inside" and some easily topped three meters. After battling for thirty minutes away from the point and into the channel, the swell diminished and the chaos of the rebound waves was behind us.

The wind was blowing strongly still, but dying now. Current and wind again aligned, and the passage across Johnstone was quite mellow. Aside from a bit of turbulence near Blinkhorn and the point outside Telegraph Cove, the rest of the journey was easy and pleasant with a nice tailwind. We arrived in Telegraph in the early afternoon, satisfied, and ready for the next adventure! 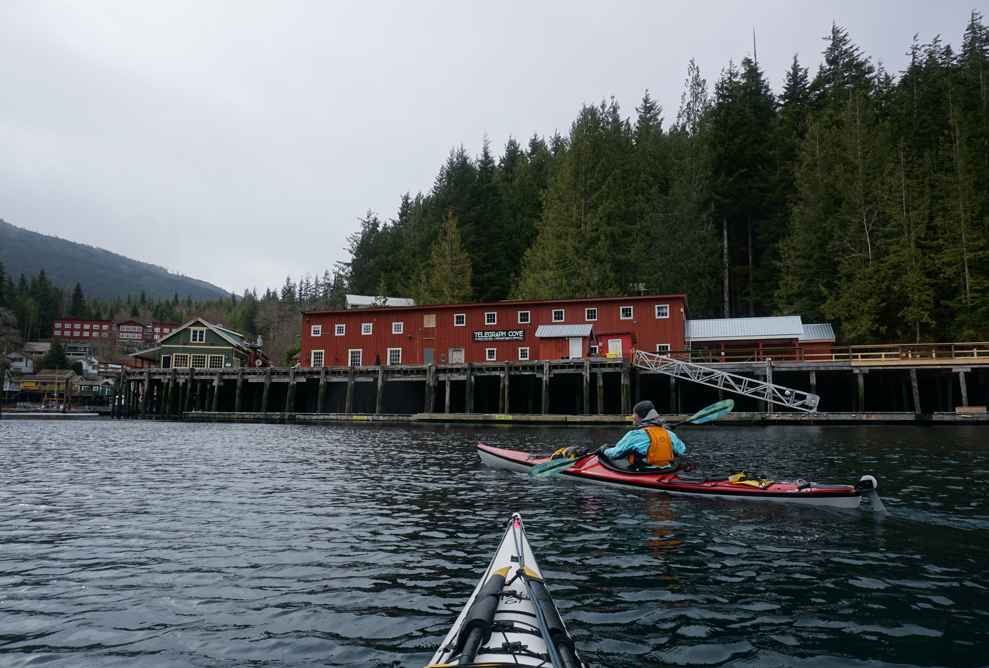 Paddling back to the shelter of Telegraph Cove.
Last edited: Jan 6, 2022