New (to me) Winter Project

The revelation provided today is that I hate it. Tore them out pretty much immediately upon getting in. Just felt too crowded and too large. I'll trim them way down and try again.

I was paddling at Hayward lake, as it's pretty close to my place. The water level was about a metre lower than it usually is, so the shallow spot with a soft bottom was actually completely exposed. I found another decent spot and tried a few rolls. Some success, but I really had to put effort into keeping my knees jammed against the deck. So something will be needed to get more reliable.

The hydro dam was sending out a lot of water, so I did a few ferry crossings and generally mucked about in the current. A few times there where a better connection to the boat would have been good.

Back to the drawing board.

The flooding and accompanying state of emergency in Abbotsford has meant a few unexpected days off work.
So today I worked on the thigh brace situation a bit more. I opted to significantly reduce the size, and tapered them a bit towards the back. I then covered the minicell in a layer of neoprene for a bit more grip. I extended the neoprene past the minicell a good amount to give have some padding between my knees and the hull. 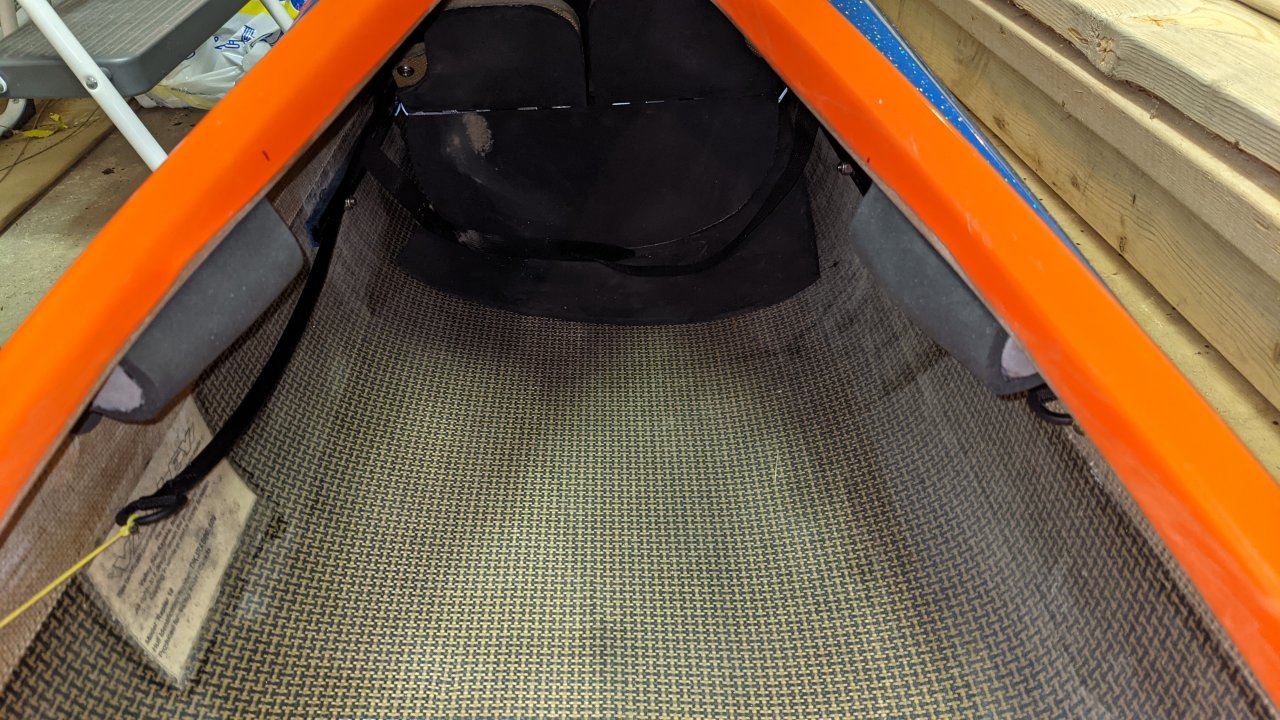 Overall a much lower profile than the last attempt. I still have them affixed with the peel and stick adhesive. If I like this setup I'll glue them in permanently.

In other news, I got some retro reflecting stickers to cover up holes I patched up earlier. I have been taking this kayak out fairly often over the last few months.

I took it for a little cruise in Burrard inlet after adjusting the foam. It felt pretty good. I've also taken it out a few times with a co-worker who has been paddling the S18R. I've even run into some ice (gently). 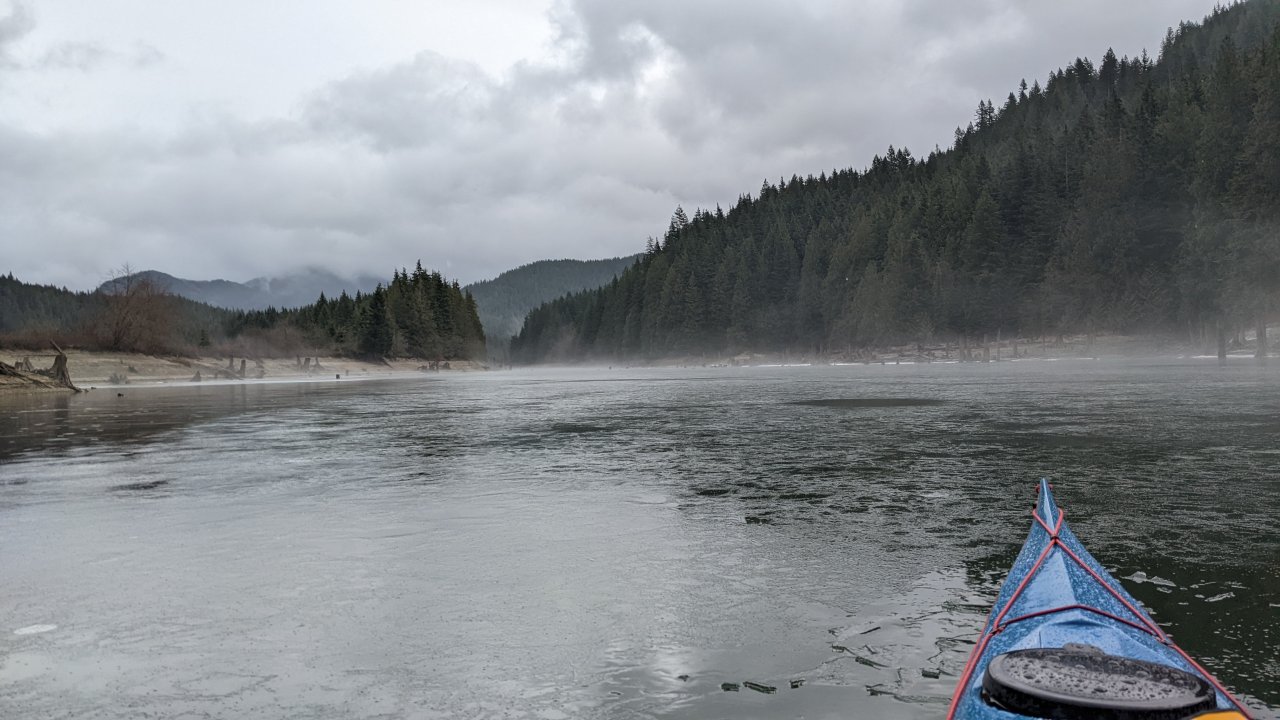 All told I'm quite pleased with the current state of things, particularly given the state it was in when I bought it.

As I get more comfortable paddling it, I've been considering using it for weekend trips. I usually don't bring a lot of gear, but still would be a trick to pack. The rear compartment has a pillar of foam, as I've mentioned earlier. I am revisiting the idea of pulling it out and reinforcing the deck from the inside. That would free up so much volume.
Maybe a few ribs of rigid foam glasses in. It would be a bit of a chore but perhaps worth it.

While on the topic of the rear compartment, I have a tiny leak. When the weather is a bit warmer I'll probably fill the boat up with water to see if I can pinpoint the source. It's a tiny amount of water, not even usually enough to form a drop, but it's obviously coming from somewhere. I suspect it's leaking where the rudder tube goes through the hull, and the drops are riding along the tube until they hit the hangers, and then coming down the hull.

Well once I get set on an idea it's difficult to move past it.

Tonight I removed the foam pillar. Most of it I was able to dislodge intact by slipping a knife between the foam and the hull/deck.
One spot was stubborn and tough to get to, so I used an old scrap of stainless steel rudder cable as a sort of pocket chainsaw, and worked my way through the foam. The most tenacious bit is on the hull side, which is good because I can focus on prepping the underside of the deck for reinforcing and deal with the other bits at my leisure. The pillar is about 2" thick, 8" tall, and 30" long.
Switching to metric, that's just under 9 litres of space gained, plus it's a much more useable shape.
Please disregard my workshop sawhorses, which are in fact mushy old cardboard boxes.

For reinforcing I'm thinking of using coremat with glass, or maybe unidirectional carbon. I'll probably do 3 ribs, maybe 5 inches wide or so. I can't quite reach 30" from the hatch, so the reinforcing will stop a bit short of where it originally was, but I think that'll be fine.

Certainly some crude workmanship there. Not that I like to use the word "workmanship" even.

Rudder pedals - what about a fore and aft bar that the pedals mount on? Adjustment for their fore and aft position can be a cam cleat (locking a webbing strap), mounted just in front of the seat. No rudderline adjustment because you make them auto adjust. In this country both Sisson, who made Nordkapps and they were used by Paul Caffyn (round Australia, Japan, Alaska etc.etc.) and I built full foot pedals. Sisson's were bottom hinged, mine with the hinge level with the ankle but still full foot size.

As for the rudder, the Smart-track is the crudest design there is. Yes, it should work and those were the type I first designed and used back about 1985. Since then the fully retracting Daggerboard rudder.

Started out by sanding the area in front of the hatch with some 40 grit to remove the remains of glue that held the foam pillar in place. There's still remnants on the hull and farther down the deck, but I'll deal with those down the line. 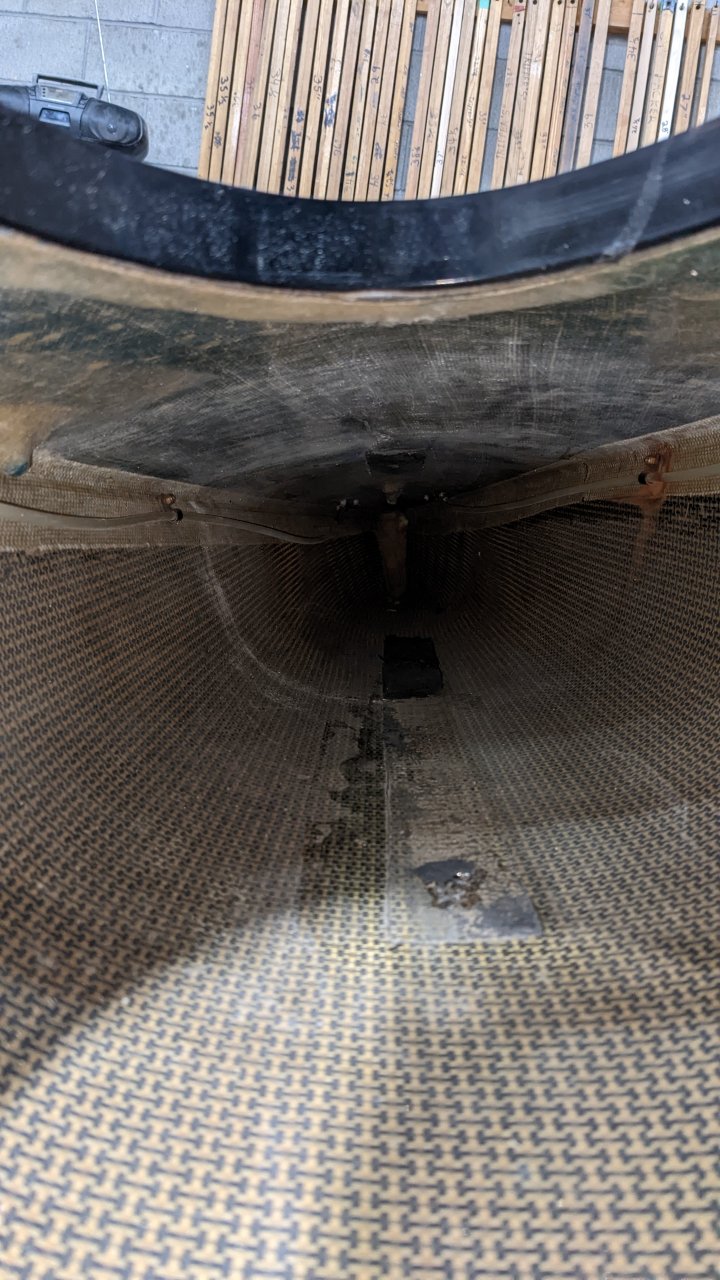 I opted to use 4 layers of unidirectional carbon fiber running across the deck. Shiny. Basically did the layup on a sheet of plastic, on top of peel ply. Then transferred that into the kayak, having brushed on a layer of resin onto the underside of the deck first. 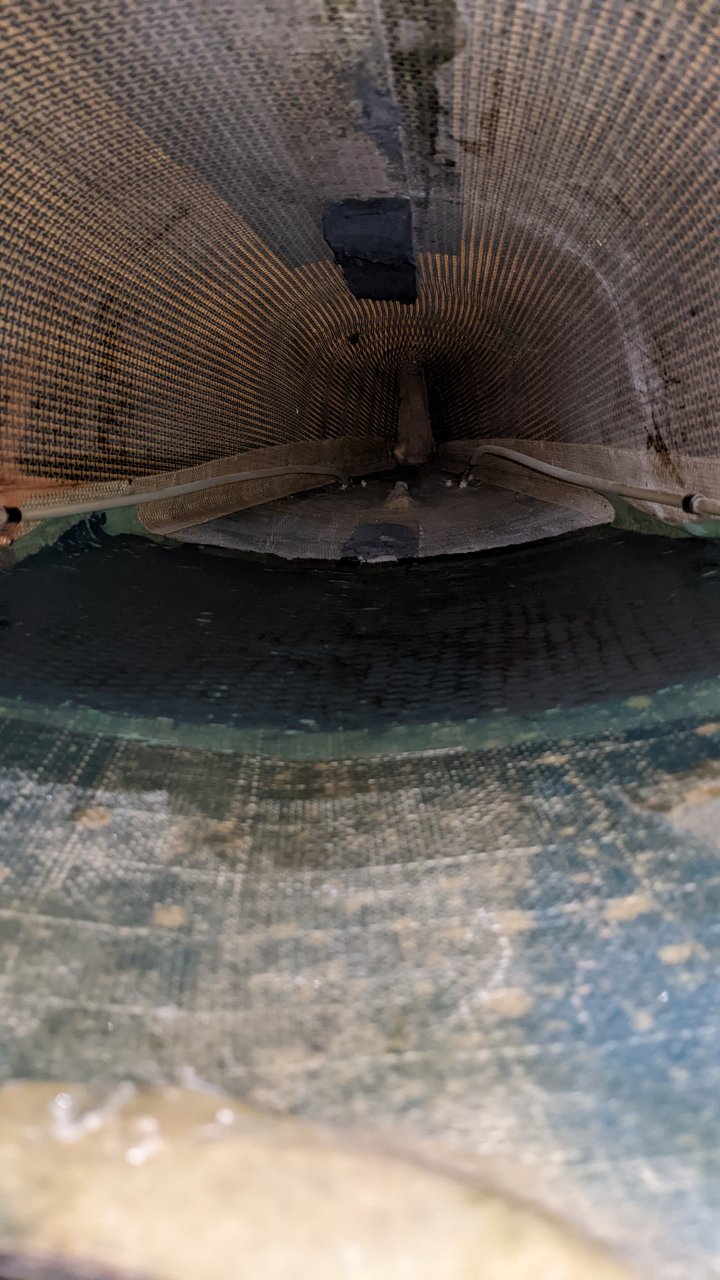 With the peel ply removed. The camera flash makes everything light up like crazy and makes some strands look really raised, but it's all nice and flat in person. I think this should be sufficiently stiffened for my intended use. The storage potential is vastly improved.

In furtherance of my goal to make this more viable for touring –which is a wholly impractical idea but feels so wrong it must be right– I've added some lash points to the cockpit. 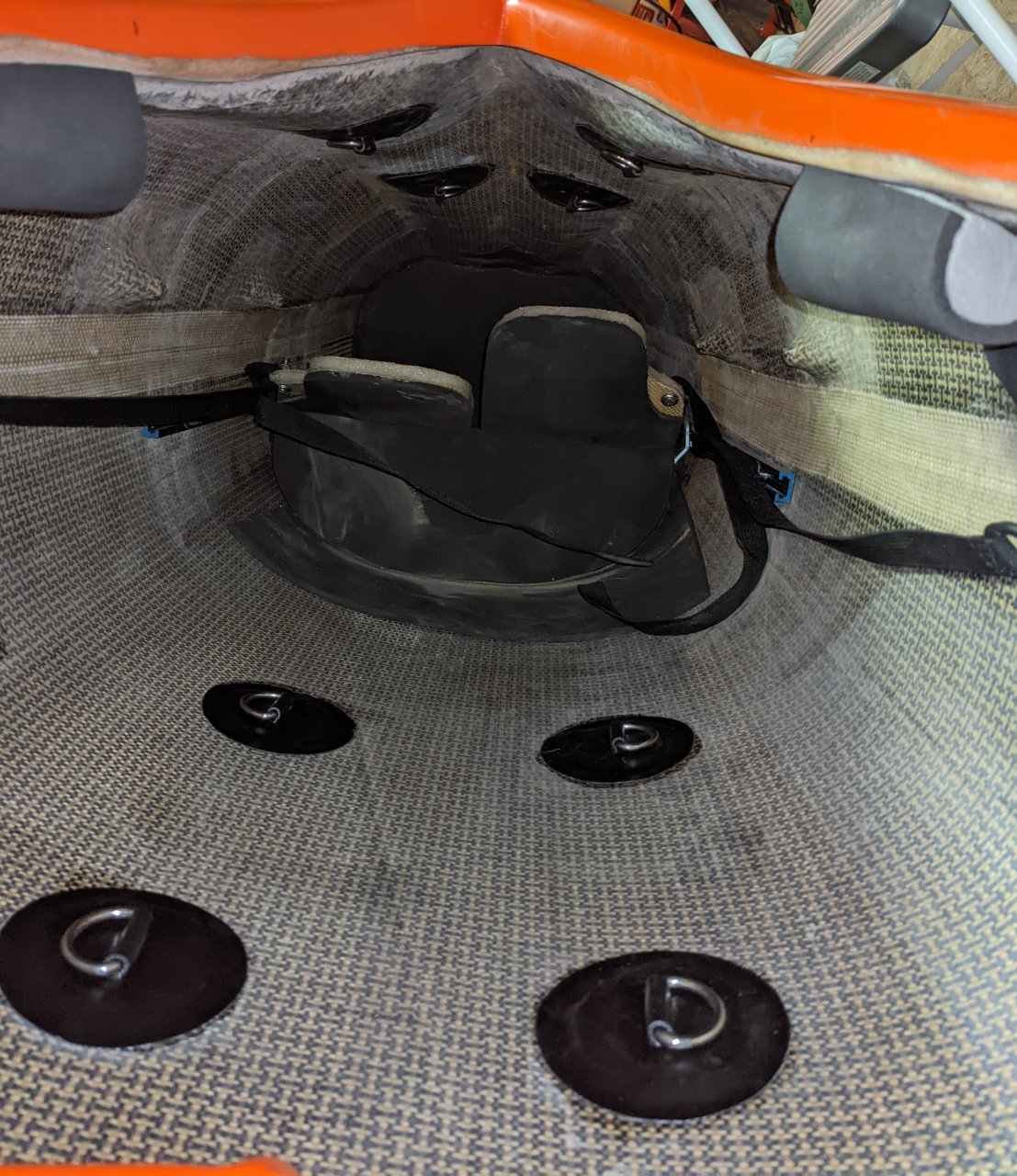 These little D rings are sold at Western Canoe and Kayak (where I work) in sets of 4 for $20 with glue suitable for sticking them onto inflatable kayaks and paddleboards. They're nice and low profile, which I preferred to some other offerings such as North Water, which are very nice but also overkill for this application and much more costly.

I used Vinyl-Tec 2000 to affix them. I'm not a huge fan of the Vinyl-Tec instructions for glueing to composite. They say to apply a coat to both surfaces, wait 15 minutes, apply another coat to both surfaces and them stick together. I did it and it sort of worked, but I ended up using heat to reactivate a few spots it didn't stick as well as to soften the vinyl of the D rings to get them to conform better. Using heat is specifically mentioned in the instructions for adhering vinyl to vinyl, so who knows why they wouldn't recommend heat for composites.

I then used some thing bungee and cord locks to make some little tie downs. I can adjust tension with the cord locks. My idea is water bladder on the floor, pump and paddle float on the underside of the deck.
I didn't have any super glue handy, but I'll deal with the frayed ends later (or I'll forget).

I have determined at least one cause for water in the rear compartment: leaky bulkhead.

I had sealed them up with lexel, but had put the bead over the existing hard and cracked PU sealant, which I didn't want to remove as it's going to need to be taken out with a grinder.

Other than just smearing more on, I don't see any simple solution. I could try removing the old stuff, but that would probably mangle the bulkhead foam. At which point I might as well just tear everything out and make new bulkhead.
J

I don't have a sure-fire solution for you , but on occasion I've used a wire brush in an electric drill to remove old sealant. NB:Wear eye (and face?) protection as those wheels sometimes throw wires.
You must log in or register to reply here.
Share:
Facebook Reddit Pinterest Tumblr WhatsApp Email Share Link
Top