December and January are the breeding season for the northern elephant seal. For several weeks, the so-called “ecoguardians” of Pearson College had been reporting the presence of multiple elephant seal females with pups, plus one large, adult male elephant seal—the beachmaster.

I figured the beachmaster couldn’t risk abandoning his harem, lest some other male sneak in behind his back. I felt certain I’d find a big, honking elephant seal this time. 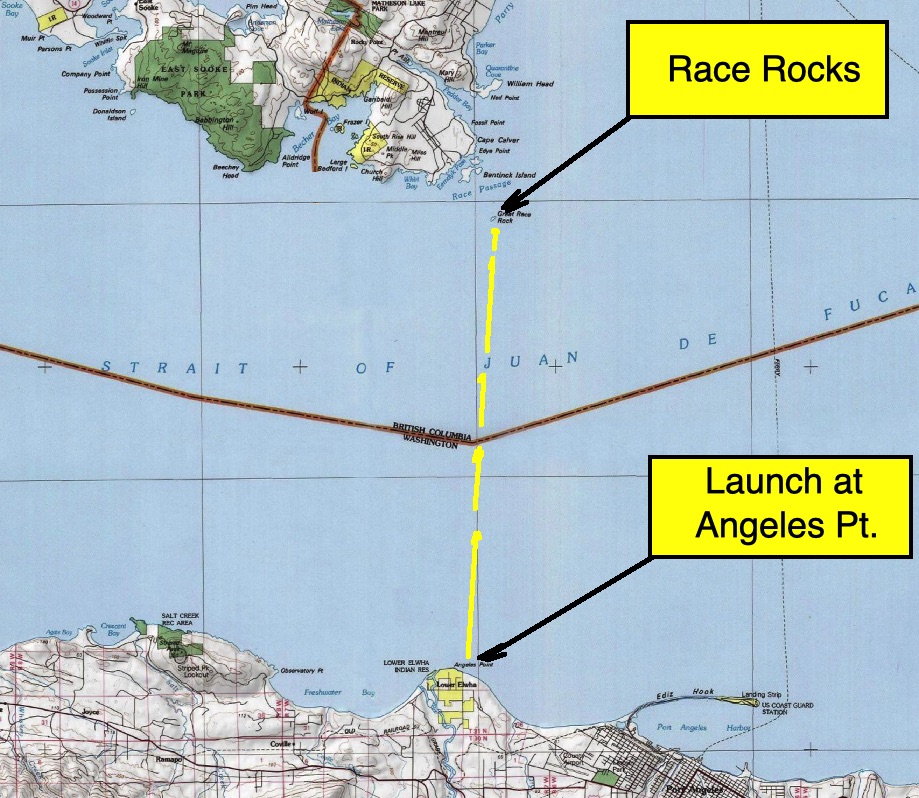 00 Route map: The launch at Angeles Point requires a quarter-mile carry down a gravel road to reach the beach, so I was grateful to have borrowed my dad’s boat cart.

The legalities of this trip I discussed in the report of my previous visit to Race Rocks in summer 2020. I won’t repeat the legal analysis here except to note that, while the Governor in Council has updated the orders regarding entry and quarantine, boaters who do not come ashore remain exempt from the various prohibitions and requirements. See PC 2021-0961, § 8(g) (exceptions to prohibition against entry); PC 2021-1050 § 1.2(a) (exceptions to quarantine requirements). Your situation may vary from mine, so consult an immigration attorney before you attempt your own, similar trip.

Still, my previous visit to Race Rocks had imbued me with confidence for this trip. I did wait for a day with low wind and low swell, but I did not worry too much about timing the tidal currents for maximum efficiency. I even delayed launching by half an hour just to reduce the length of time I would have to paddle in the pre-dawn darkness.

I paid a price for my insouciance. About halfway across the strait, I encountered an adverse south-setting current, the product of a notorious eddy that occurs east of Race Rocks. The eddy sapped my speed such that a crossing that had taken only two and a half hours in the summer now took more than four hours.

The delay during the outbound leg led to further delays on the return leg, when I encountered a two-and-a-half-knot ebb I had hoped to avoid by completing the return before the ebb could swell to its full strength. In the Strait of Juan de Fuca, any delay caused by difficult currents will lead to even more difficult currents!

Fortunately, I had picked a day with low wind and low swell. A two-and-a-half-knot ebb is powerful enough to generate breakers if there is a strong easterly wind or a large westerly swell. Today, however, there was only a gentle northeasterly breeze, ten knots at most, with only the tiniest southwesterly swell. The ebb was exhausting to deal with at the end of a long paddle, the more so since the ebb grew stronger the longer I stayed out, but at no time did the conditions pose any threat. 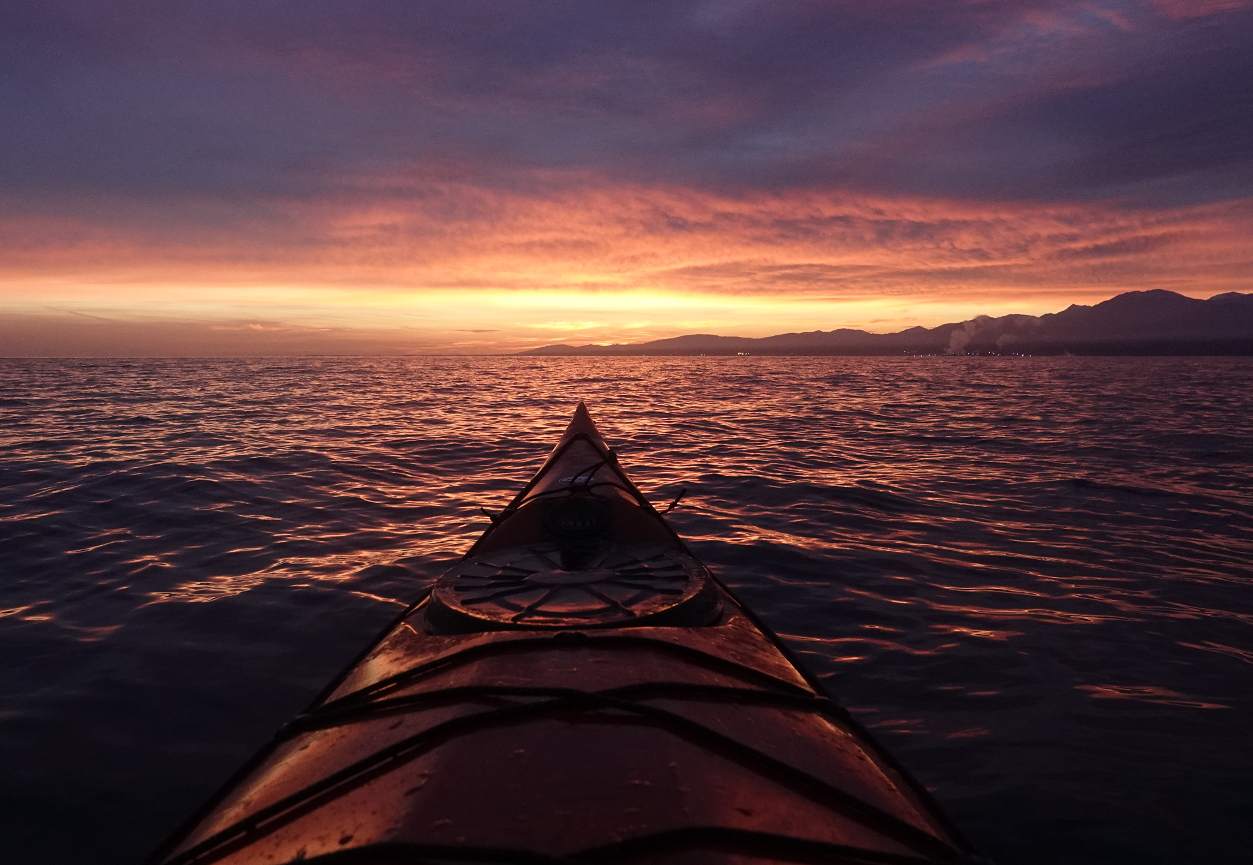 01 It’s morning in America. The January sun lay so far south I had to turn back toward Port Angeles to watch the sunrise. 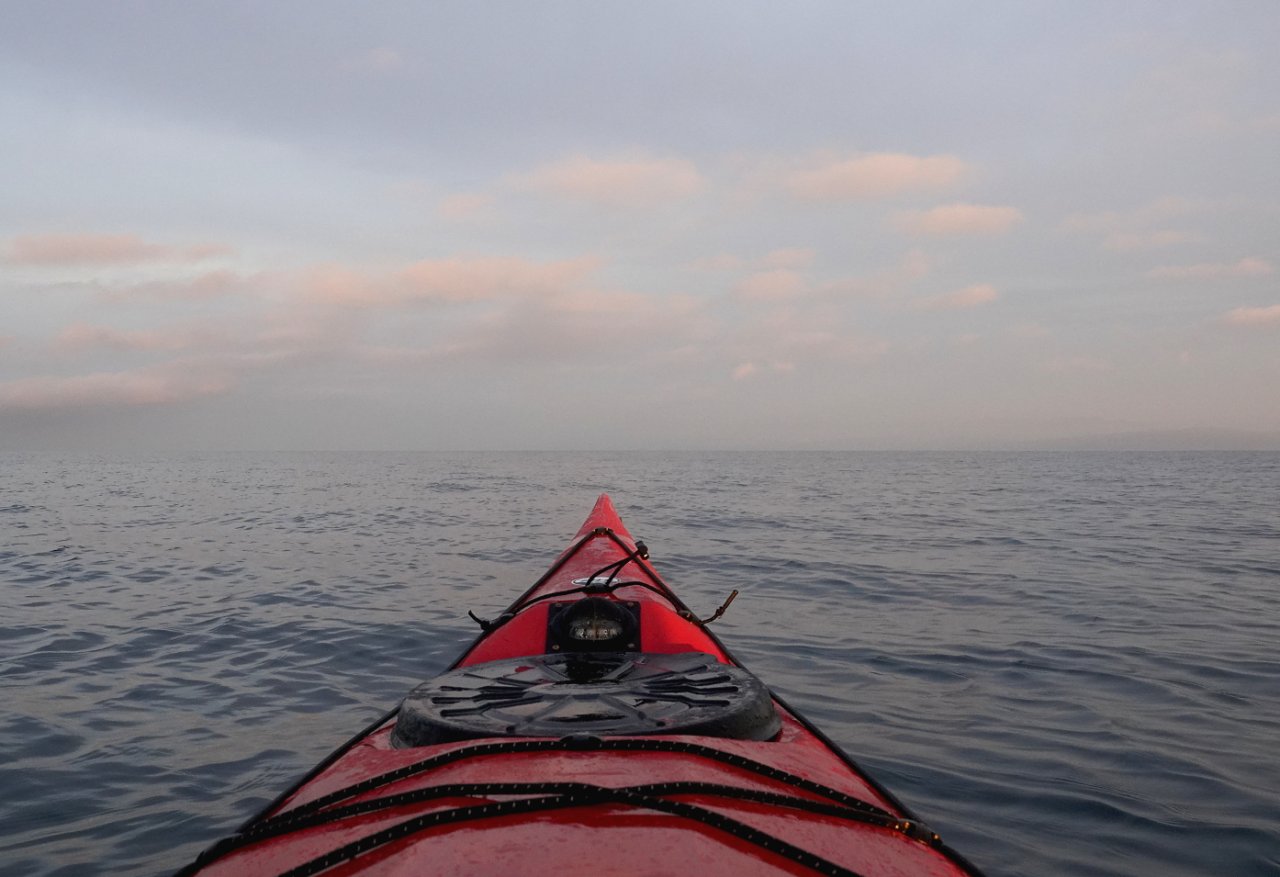 02 Kayaking across the Strait of Juan de Fuca. Atmospheric haze obscured Race Rocks till I drew within five miles. 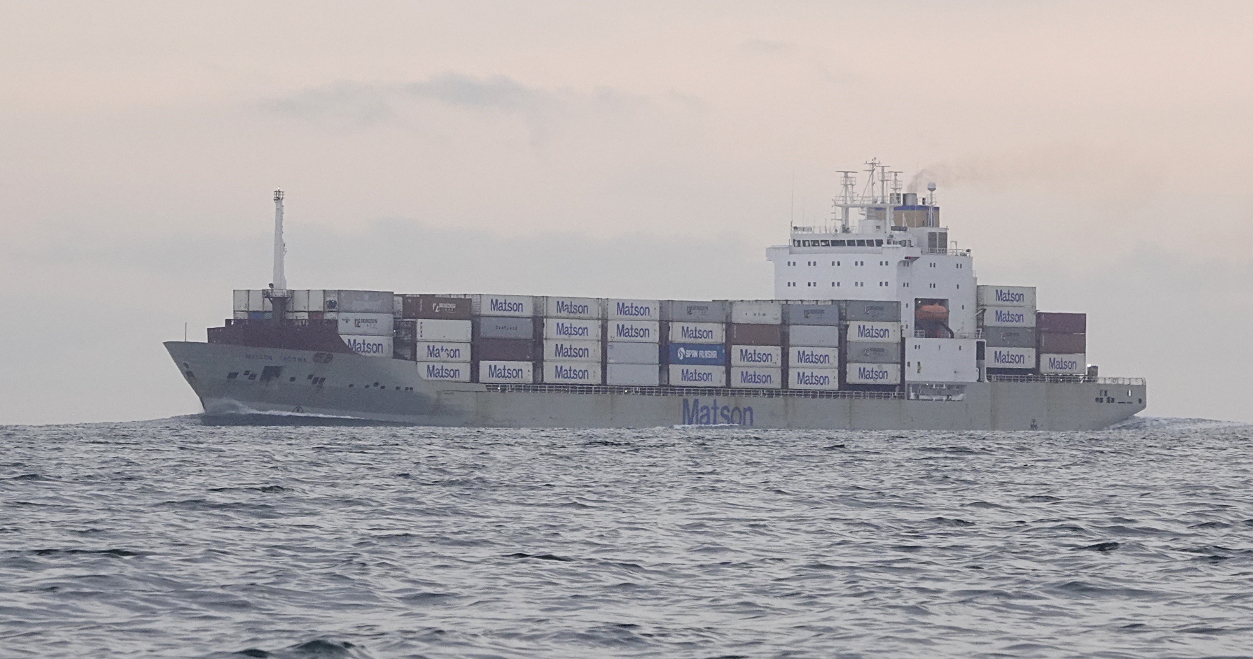 03 M/V Matson Tacoma, en route from Tacoma to Anchorage. Cargo ships pose a threat to kayakers in the Strait of Juan de Fuca, but the risk is manageable for an alert kayaker. 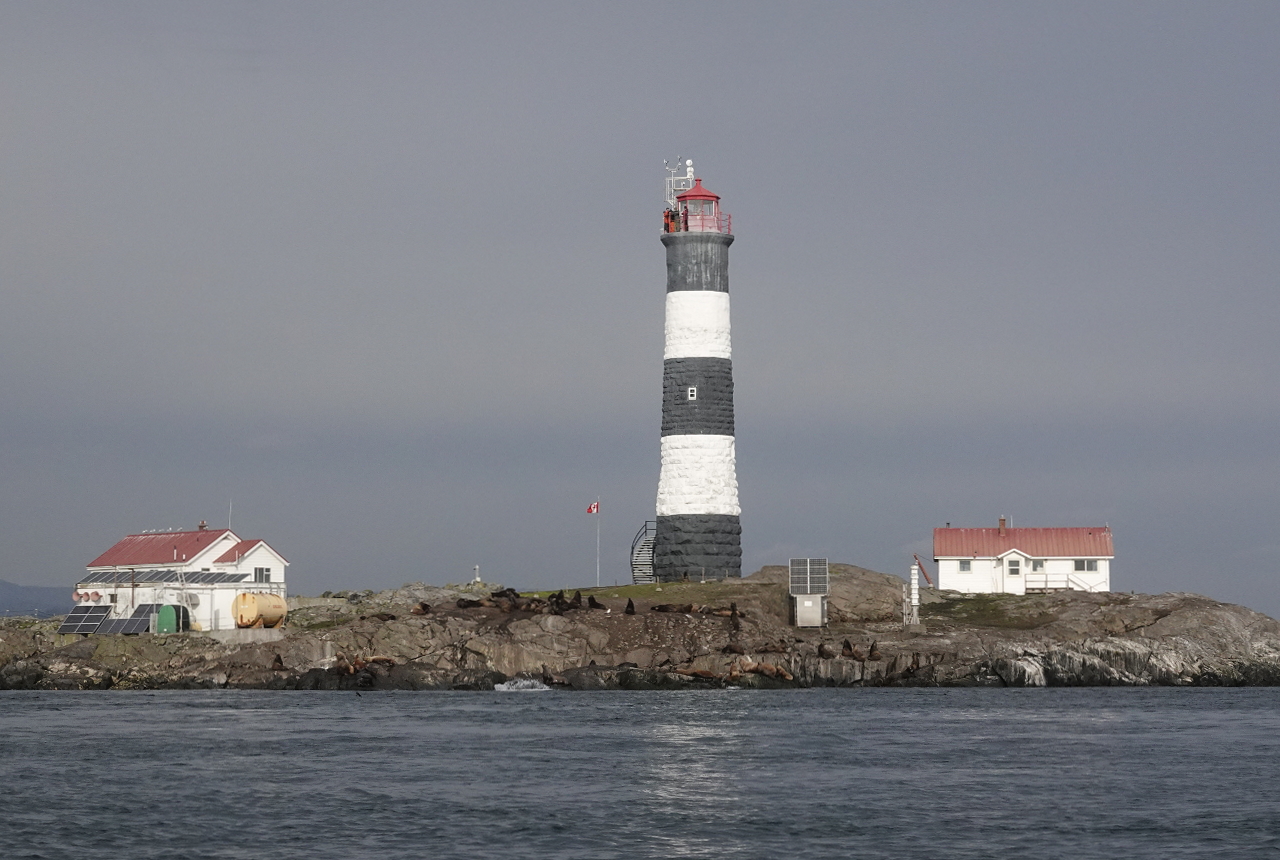 04 Approaching Race Rocks lighthouse. Constructed in 1860, the lighthouse has been automated since 1997, the same year Pearson College established a semi-permanent staff of “ecoguardians” on the island.

The crossing of the Strait of Juan de Fuca was long but uneventful. There were huge numbers of harbor porpoises present throughout the strait and even a small but energetic pod of Dall’s porpoises. Seabirds included Pacific loons and long-tailed ducks, although I missed seeing Cassin’s auklets, the main bird attraction in the strait.

There were so many sea lions hauled out on Race Rocks I could have found the place just by the noise. The Steller sea lions played low, moaning bass notes, while the California sea lions contributed brassy, barking honks. A handful of quiet, gentle harbor seals kept to the smaller rocks offshore, like long-suffering homeowners forced to endure their neighbors’ awful music. 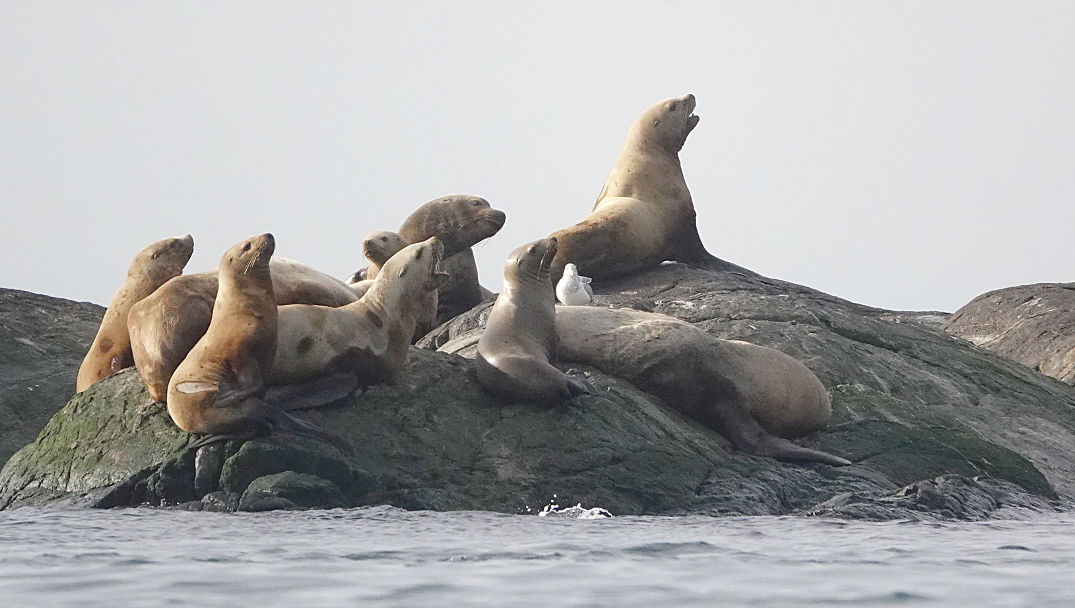 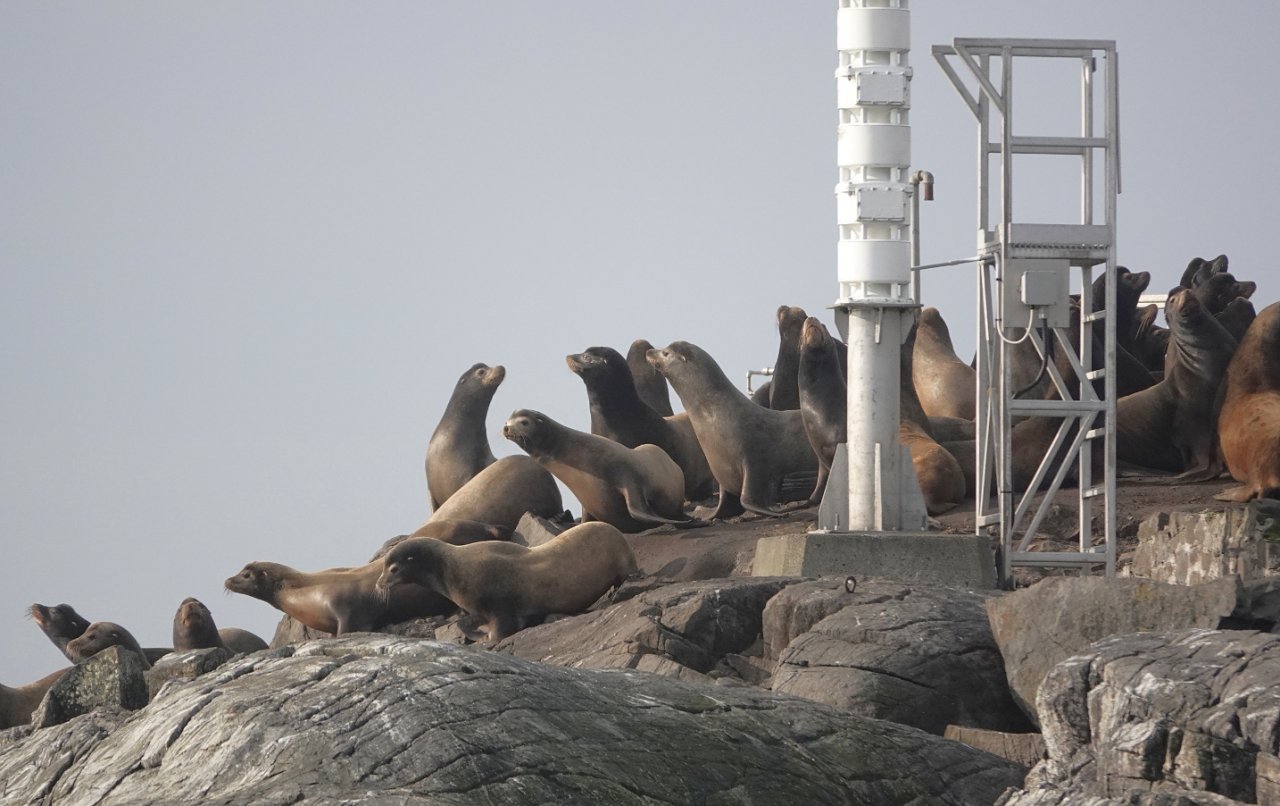 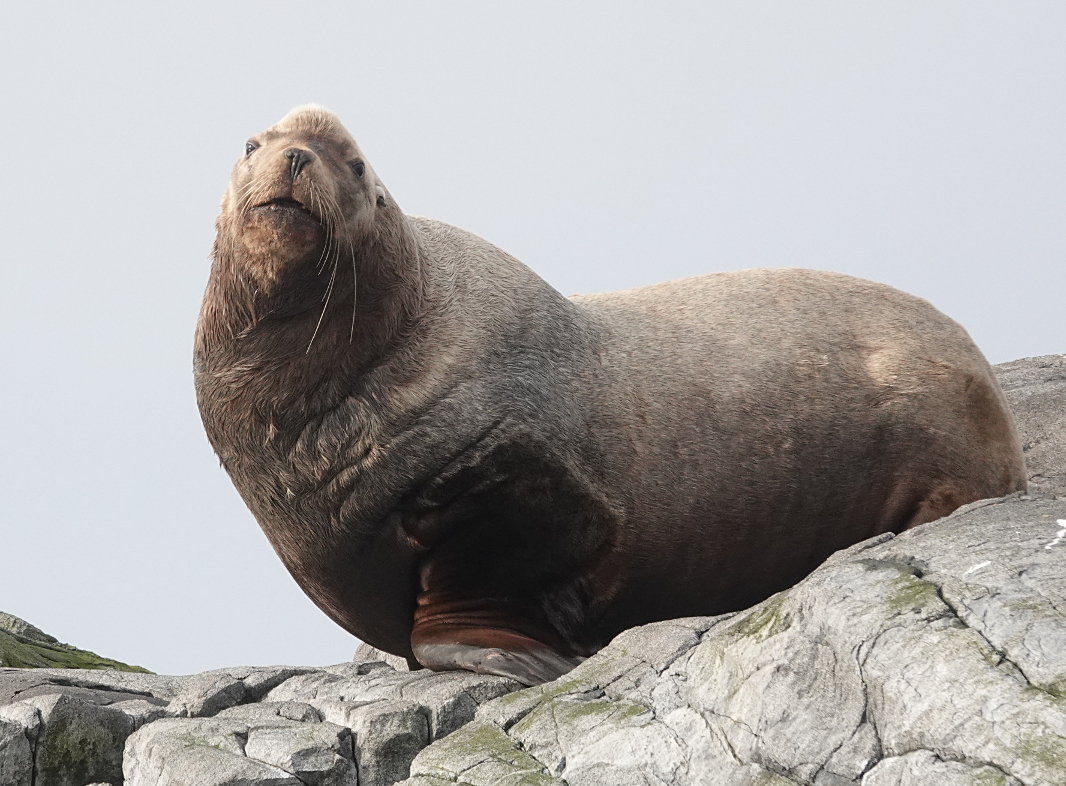 07 Adult male Steller sea lion. Males of this species can weigh over one ton. 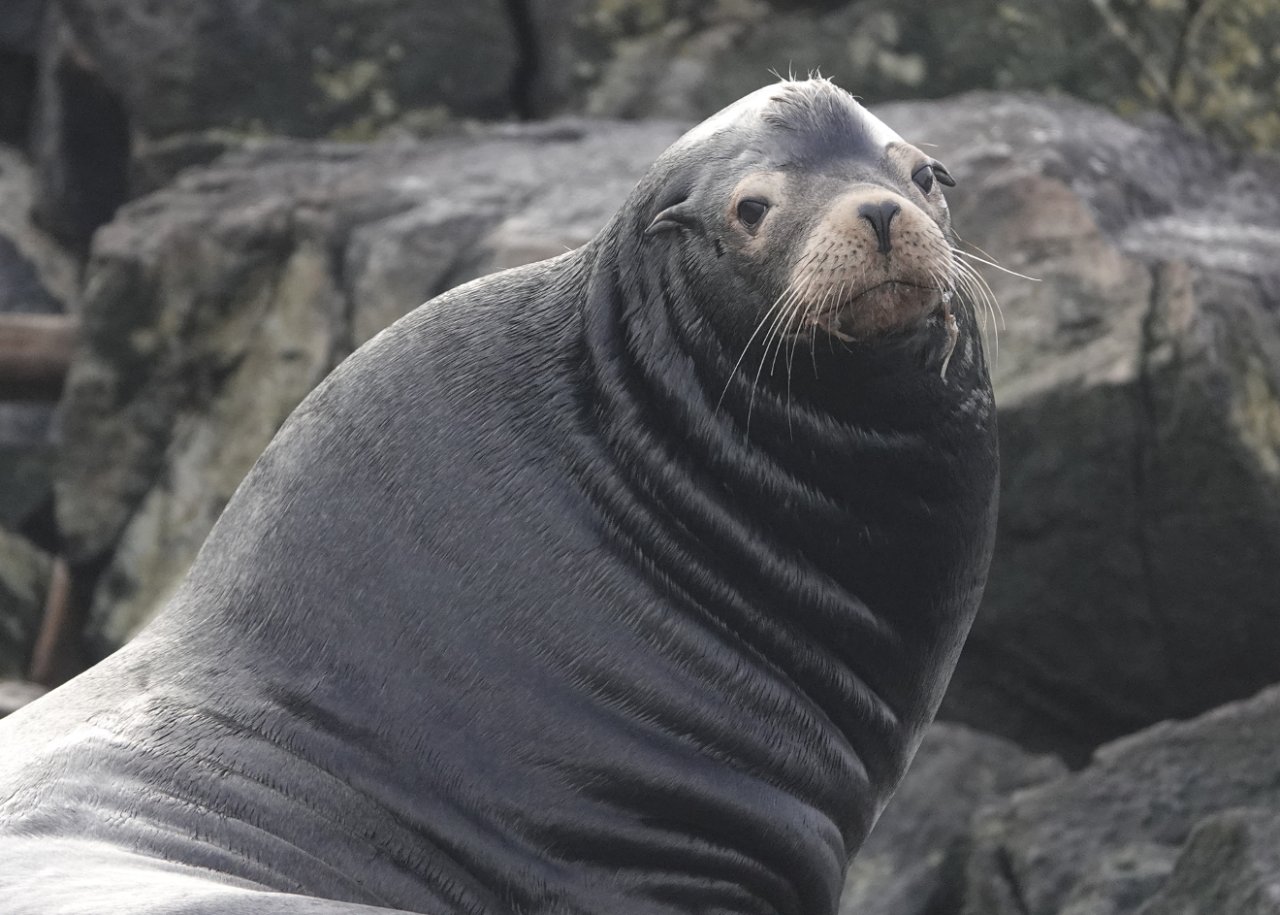 08 Adult male California sea lion. Males of this species can weigh over half a ton. 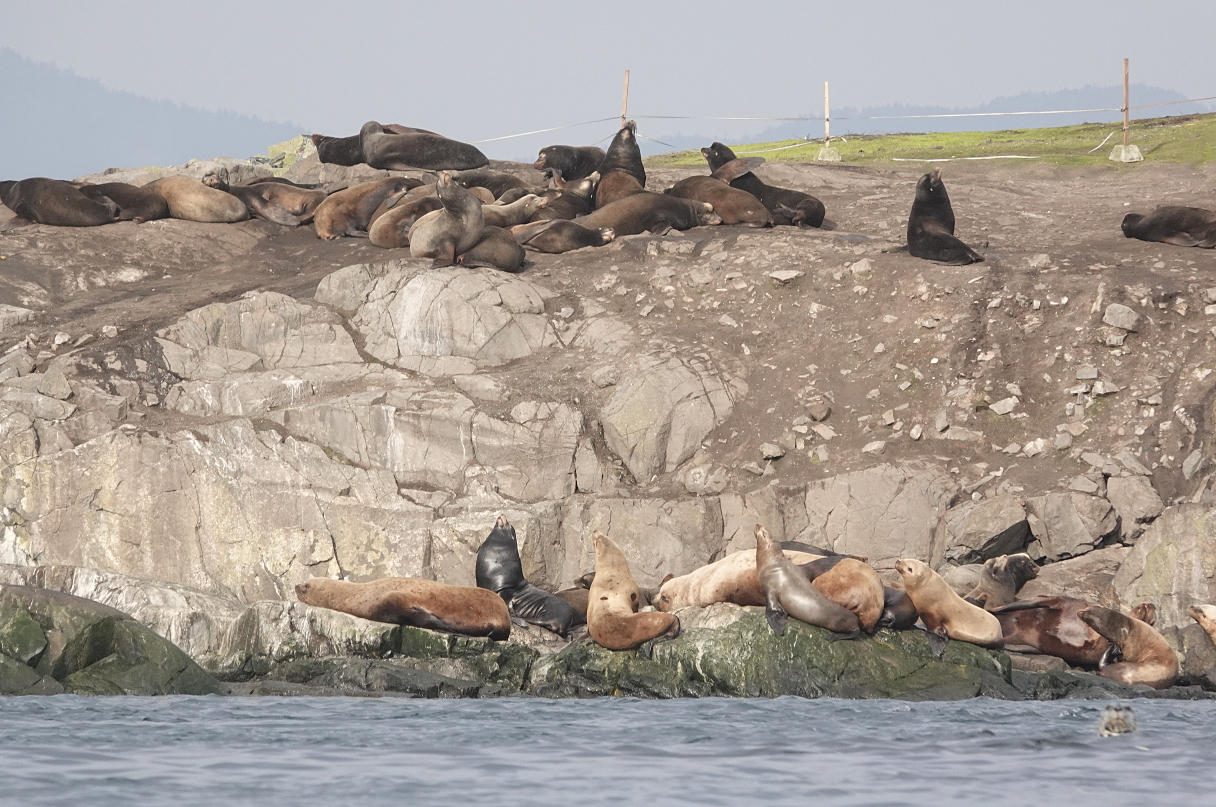 09 Pinnipeds of Race Rocks. California sea lions on the bluff, Steller sea lions on the rocks, harbor seals in the water. The fencing is maintained by the “ecoguardians” to control the movements of the animals.

To my dismay, I did not find any elephant seals. I circled the island, peering inland with my binoculars, but there was no sign of the mighty beachmaster or his harem of females. For the second time, I had struck out.

I’m at a loss to explain it. The elephant seals must hide in depressions among the rocks where they can’t be seen from the water.

I was already running two hours late, and each passing minute meant I would face worse currents during my return. Much as I wanted to park offshore of the island and wait for an elephant seal to appear, I had to turn back across the strait. 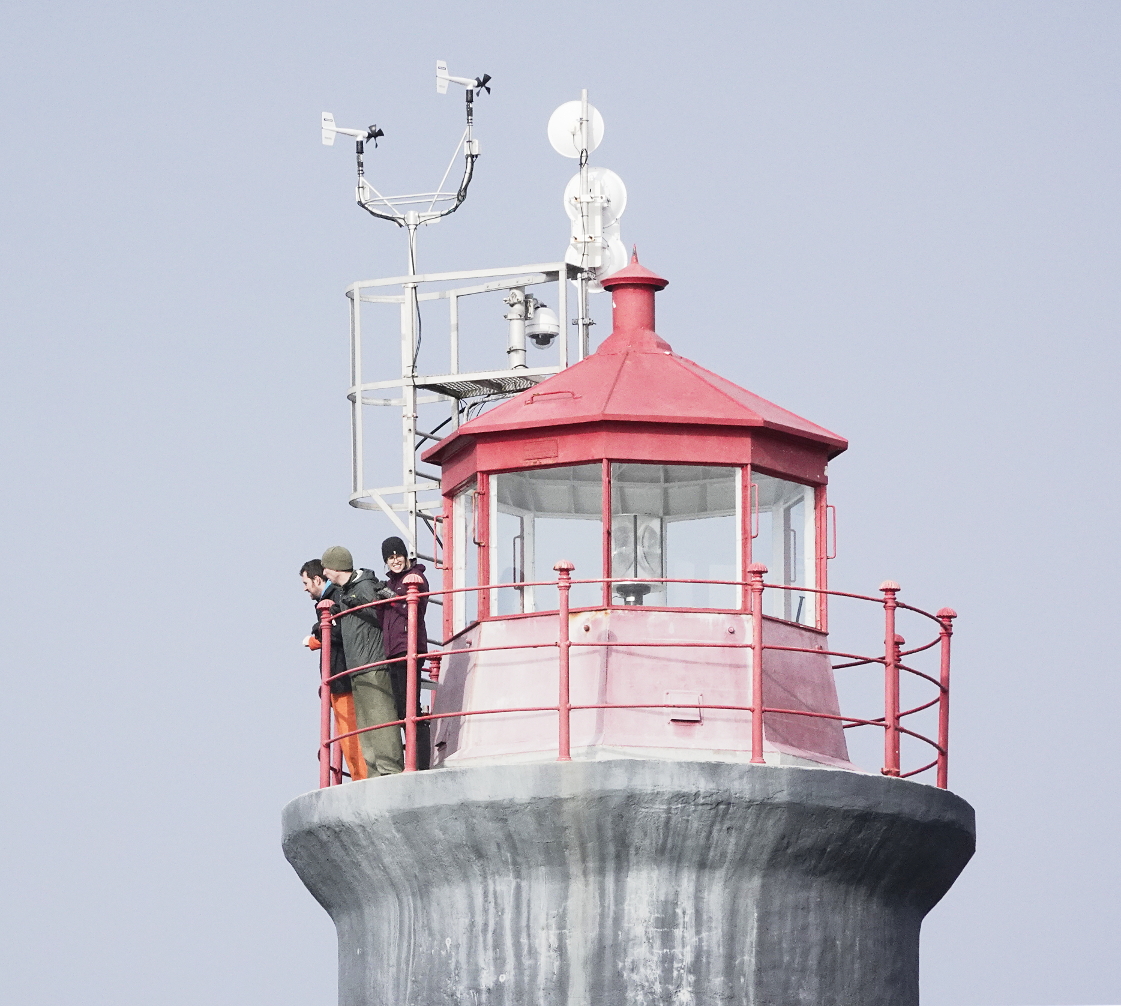 10 Race Rocks ecoguardians atop lighthouse. These people stampeded thirty sea lions when they moved between their quarters and the tower. Race Rocks might be better off without their “guardianship.” 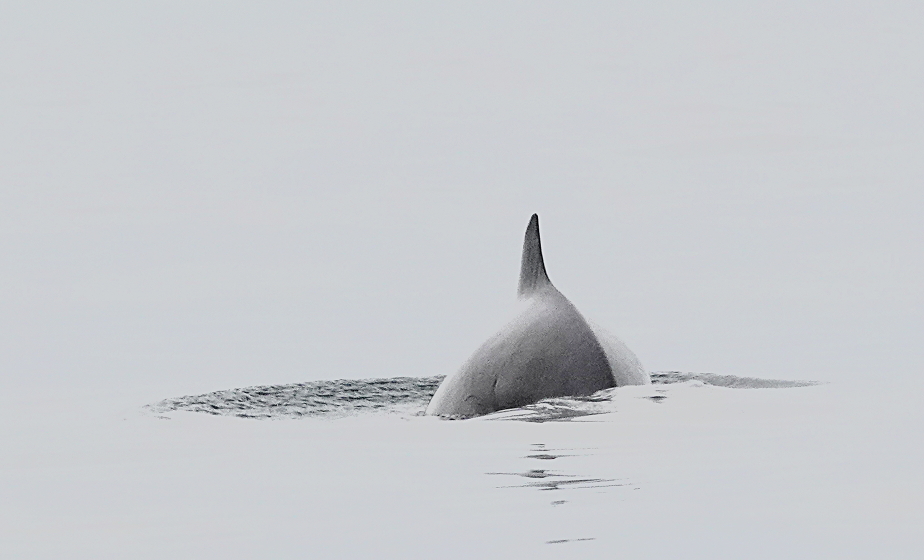 11 Harbor porpoise, Strait of Juan de Fuca. Wind, swell, and current are no concerns of theirs. 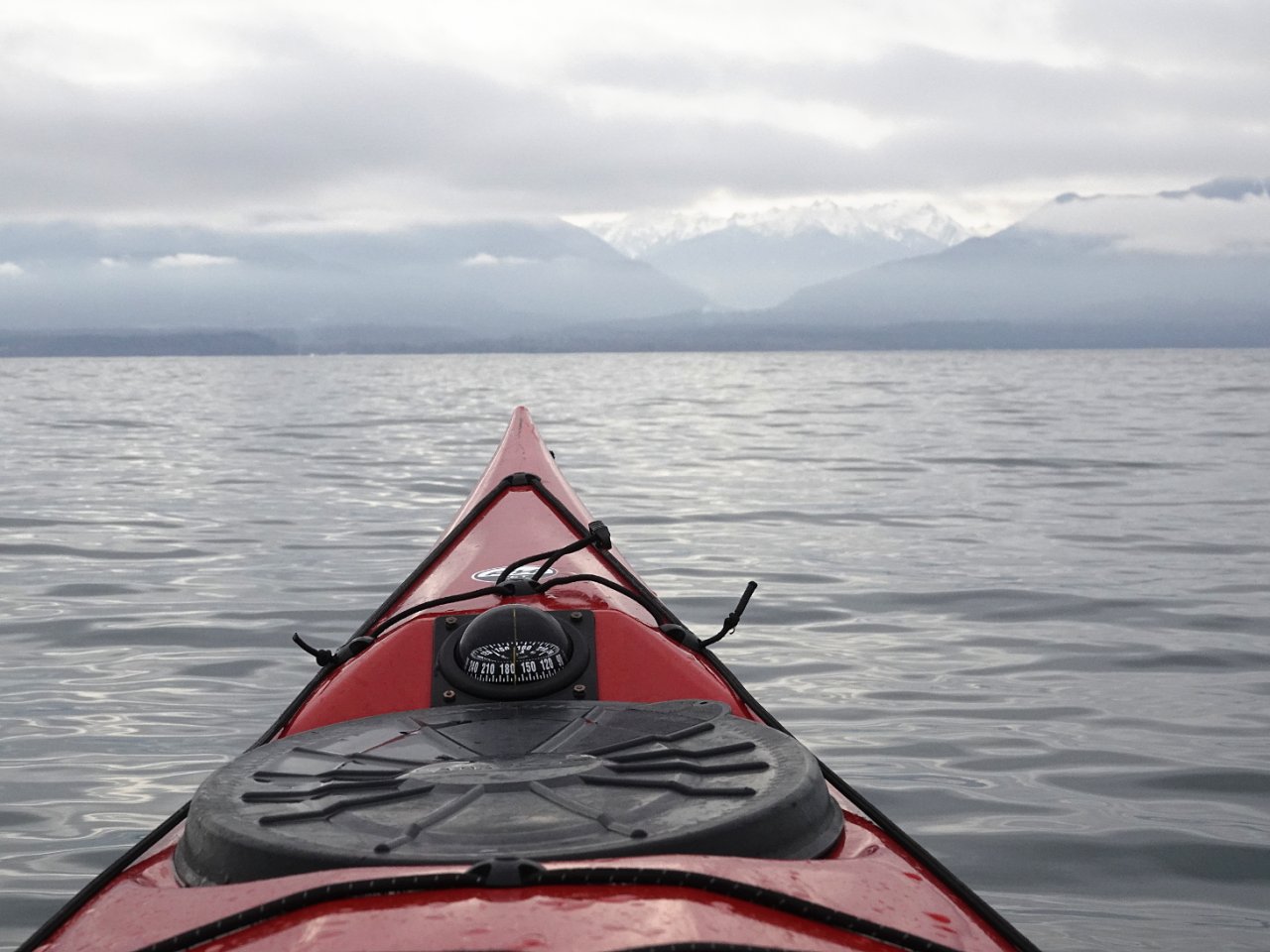 12 Kayaking southward across Strait of Juan de Fuca. The Elwha River valley forms a distinct notch in the foothills, a landmark along an otherwise featureless coast.

It’s impossible to feel disappointed about a day spent in the Strait of Juan de Fuca. Even without elephant seals, there were enough marine mammals and birds to satisfy even the most ardent lover of wildlife.

Amazing shots, as we’ve come to expect from you, Alex.

Thanks for sharing the great photos. That is one serious "day trip."