Many species of whale visit Washington State from time to time, especially far out in the offshore waters. Most don’t stay long and are only seldom seen, even by fishermen.

Over my years of kayaking, I’d seen each of these species many times, except the last. I had never seen a minke whale.

Biologist Ellie Dorsey spent decades researching minke whales in Washington. She discovered that, although Washington minkes are mainly seasonal visitors, when they do come to our waters, they exhibit a high degree of site fidelity. Once a Washington minke finds a spot it likes, it will return over and over to that exact location and no other.

According to Dorsey, Washington’s San Juan Islands are home to three of these particularized minke territories: the southwest coast of Waldron Island, the southern half of San Juan Channel, and, most popular of all, Salmon Bank and Hein Bank, the two of which the minkes consider a single, large territory, although Salmon Bank is the more preferred.

Dorsey also discovered that, although minkes can be seen in Washington year-round, they mostly come during summer. Peak numbers appear in July.

As Dorsey’s data demonstrate, the fourth week in May would be a little early for minkes, but I had just bought a new kayak and was itching for an excuse to try it out on saltwater. Furthermore, on account of the coronavirus restrictions, I I hadn’t yet been to the San Juans in 2020, and I’d been missing the islands. Campgrounds in the islands were still mostly closed, but I could make a day trip to find a minke whale.

To maximize my odds, I launched at Otis Perkins County Day Park on Lopez Island, in the heart of the whales’ San Juan Channel territory, then paddled south to Salmon Bank, the whales’ most popular territory. 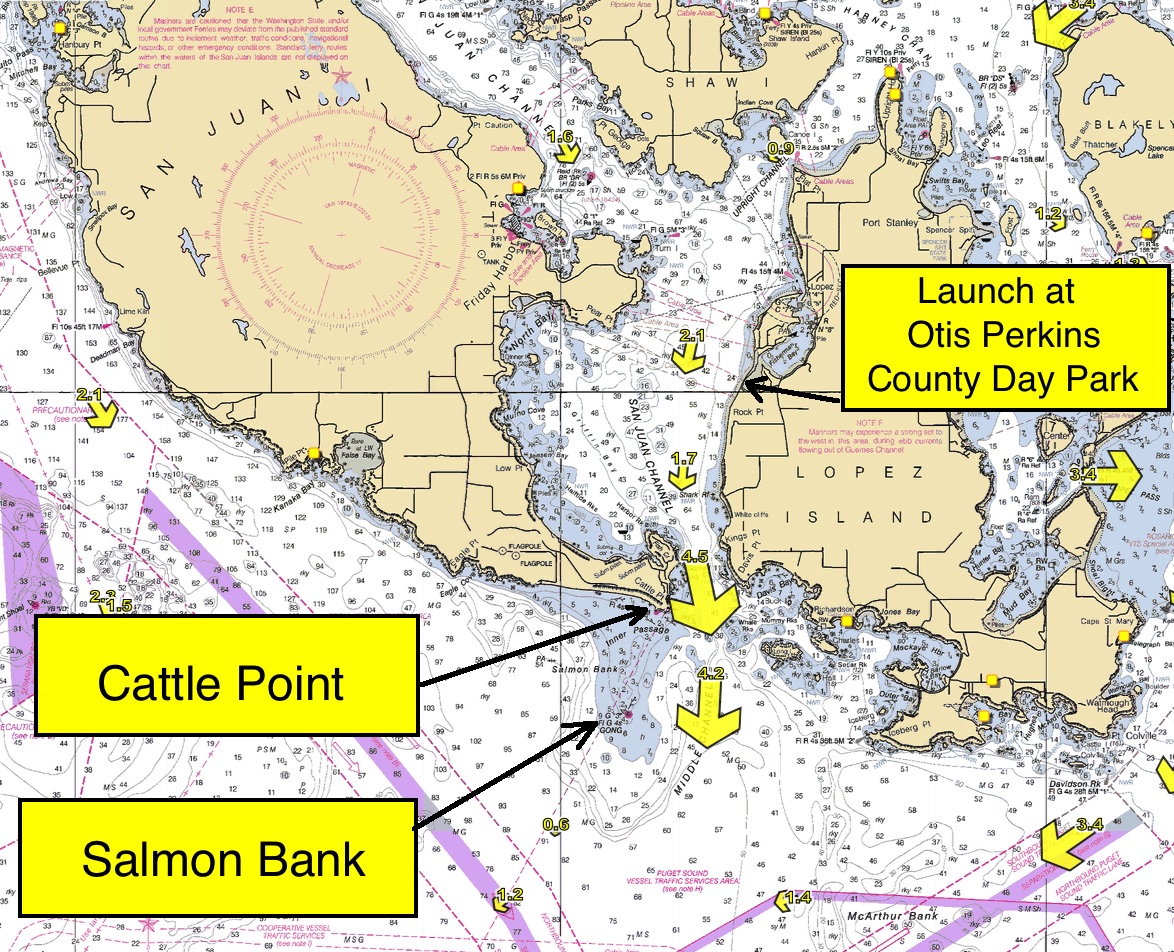 00 Route map. The yellow arrows show the current direction at the peak of the ebb tide on 25 May 2020, with current speeds given in knots. Larger arrows indicate faster current.

Currents in San Juan Channel are notoriously powerful. I launched at 10:30 to catch the maximum ebb, which whisked me through the channel and out to Salmon Bank. At times, the current speed exceeded four knots.

It was a still, gray. drizzly day—real Washington weather. It was so overcast there were no visible landmarks once I exited the confines of San Juan Channel. Vancouver Island and the Olympic Mountains, which normally frame the horizon in the western San Juan Islands, were totally obscured by clouds.

All of the winter seabirds had long since departed, but there were good numbers of pelagic cormorants, rhinoceros auklets, and pigeon guillemots, and even a few common murres.

These species are all local breeders except the murres. The murres had come in on foraging trips from their offshore colonies. 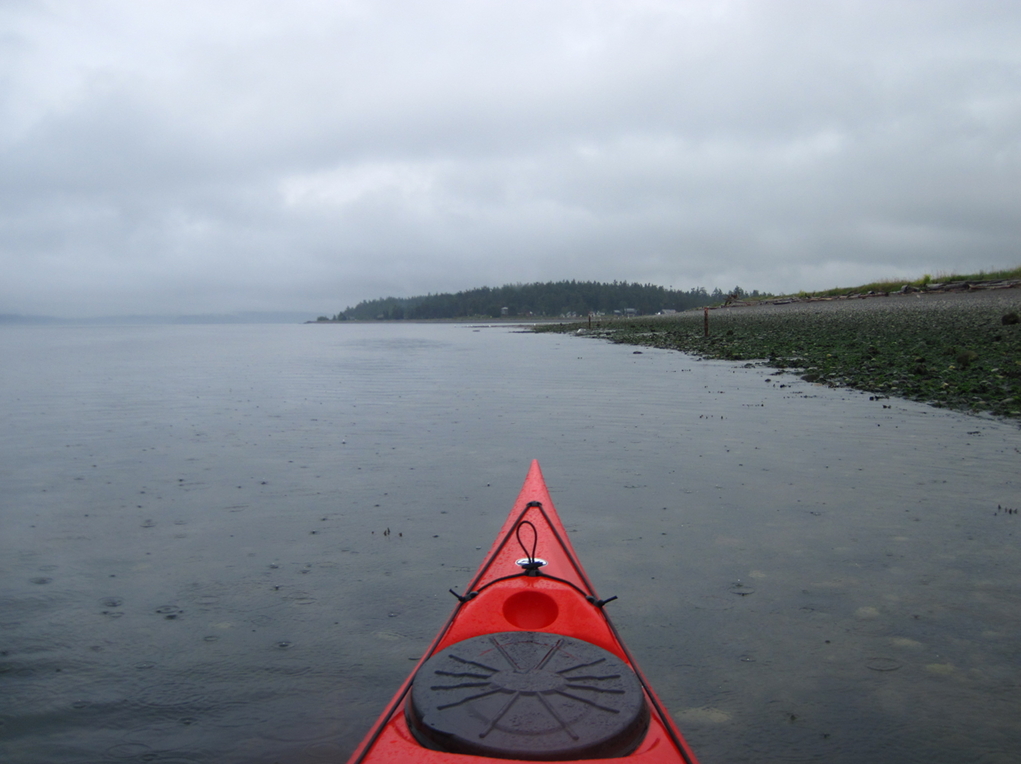 01 Beach at Otis Perkins County Day Park. To forestall harassment by law enforcement or criticism by locals, I printed copies of the various governor’s proclamations and county health orders and left them on my windshield, so passersby could assure themselves that I was not doing anything unlawful by traveling to the San Juans for a day paddle. 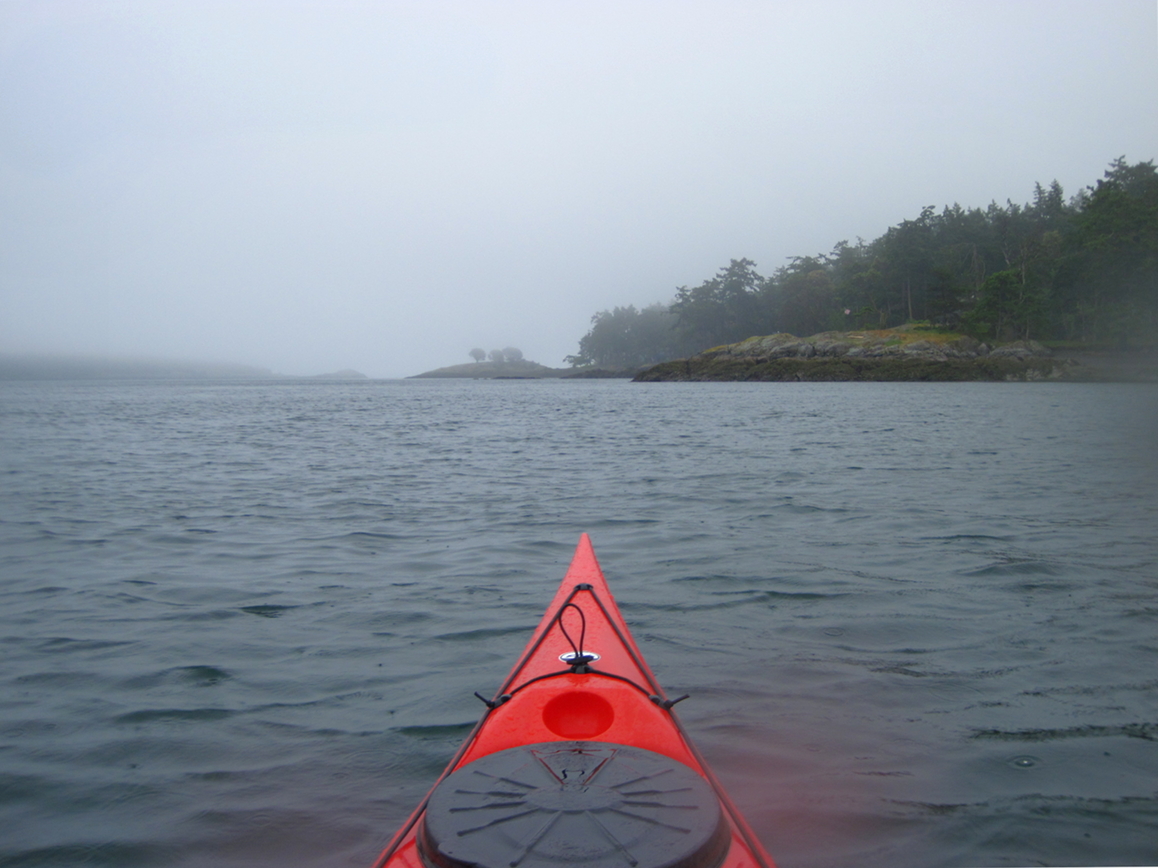 02 Southbound down San Juan Channel, on the San Juan Island side of the channel. Between the powerful ebb and my fast, new Tiderace kayak, I sprinted to peak speeds in excess of 8.5 miles per hour (14 kph)—the pace of a fast jog. 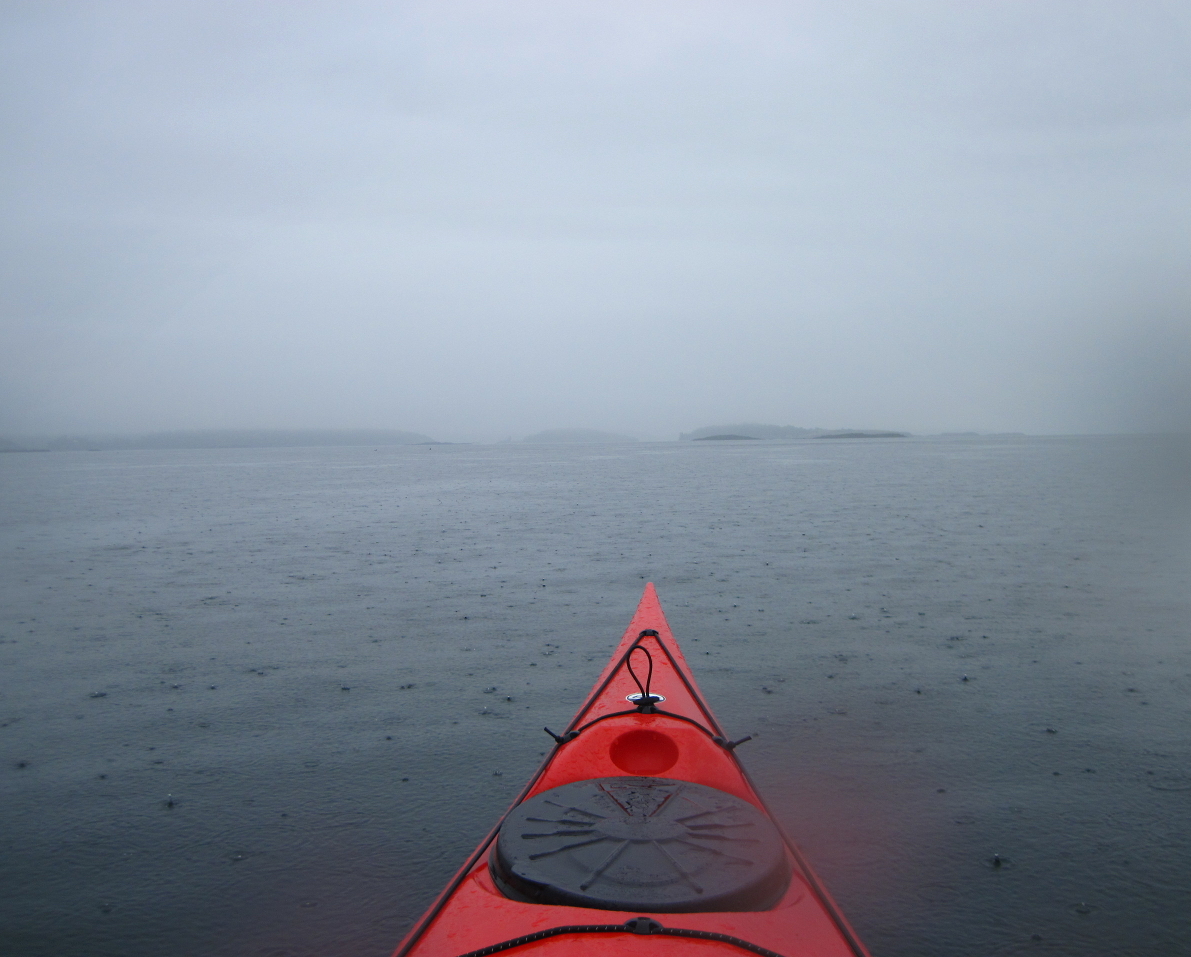 03 Looking toward southwest coast of Lopez Island. I love being out on the water on a calm, rainy day. 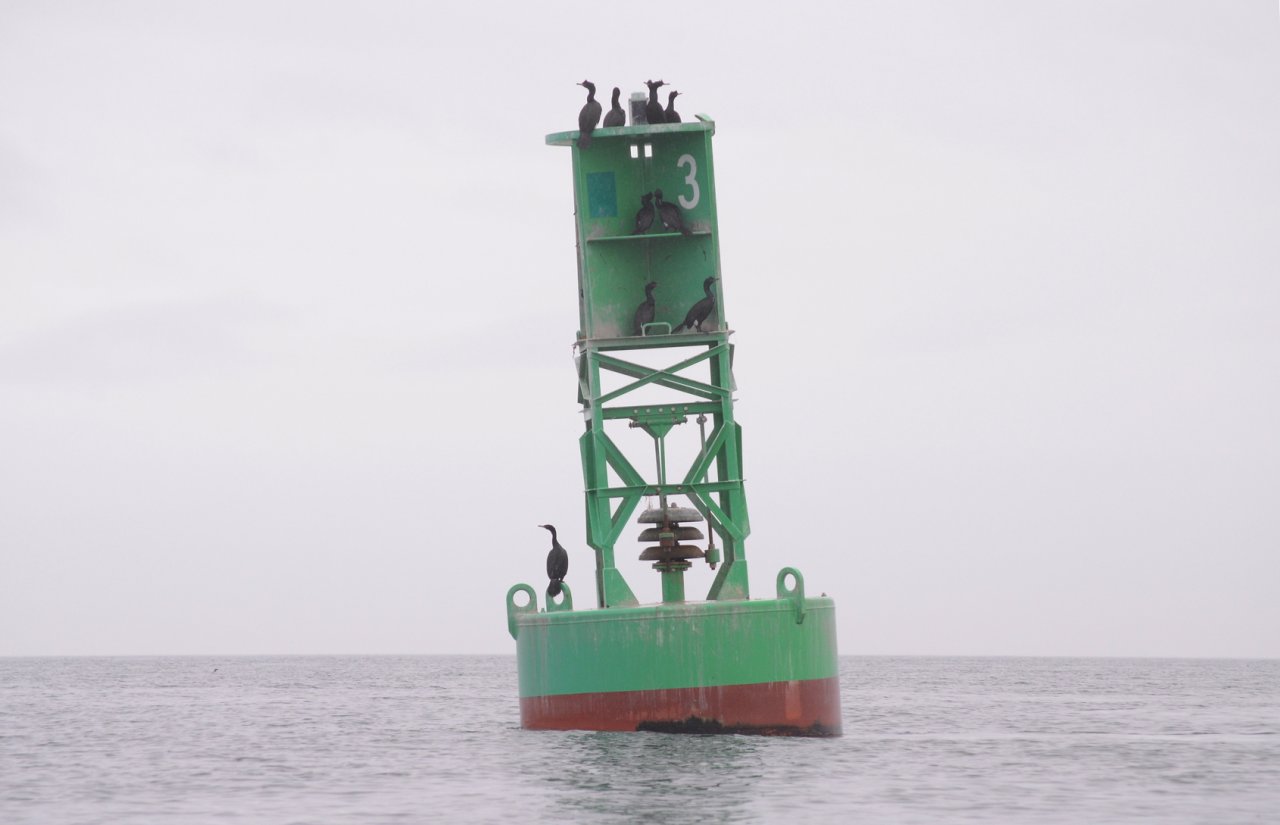 04 Pelagic cormorants on the Salmon Bank buoy. This buoy was equipped with a carillon of bells that sounded like the tinkling of wind chimes, quite unlike the monotonous bong, bong, bong of most buoys. 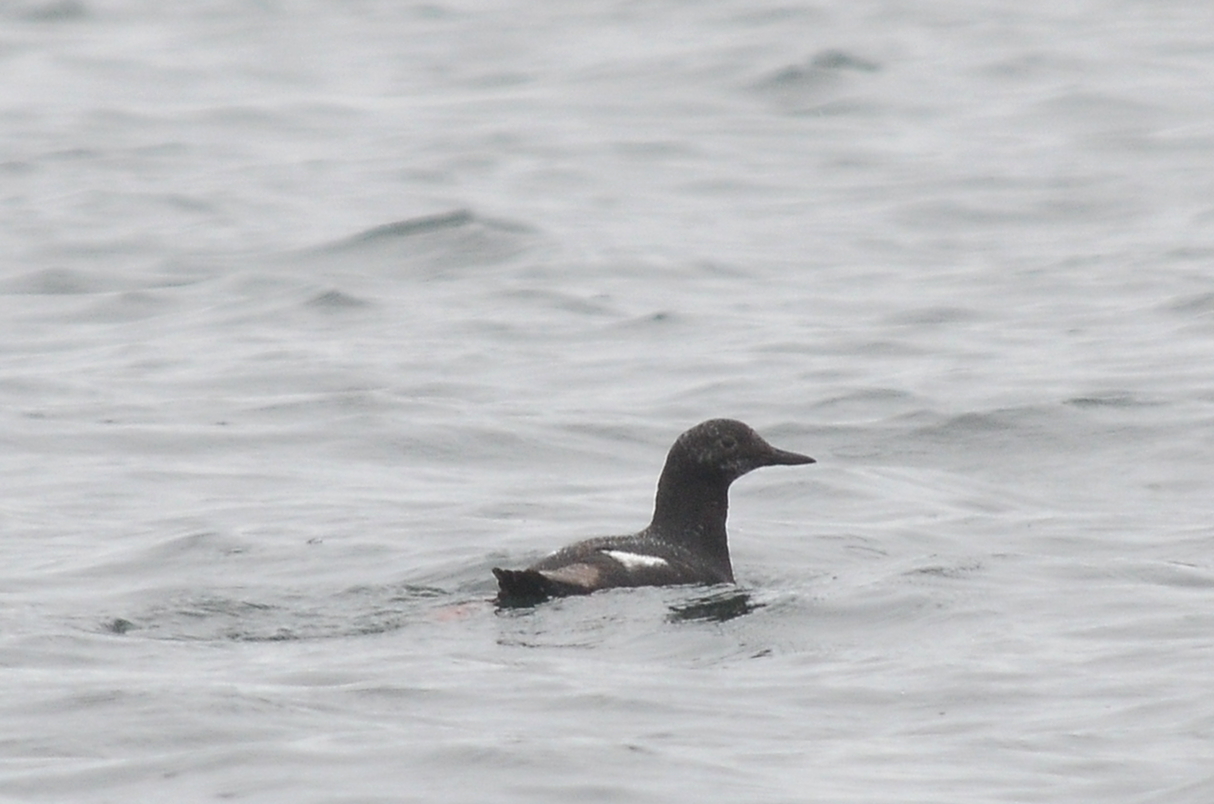 05 Pigeon guillemot at Salmon Bank. Every one of the guillemots I saw was in breeding plumage. 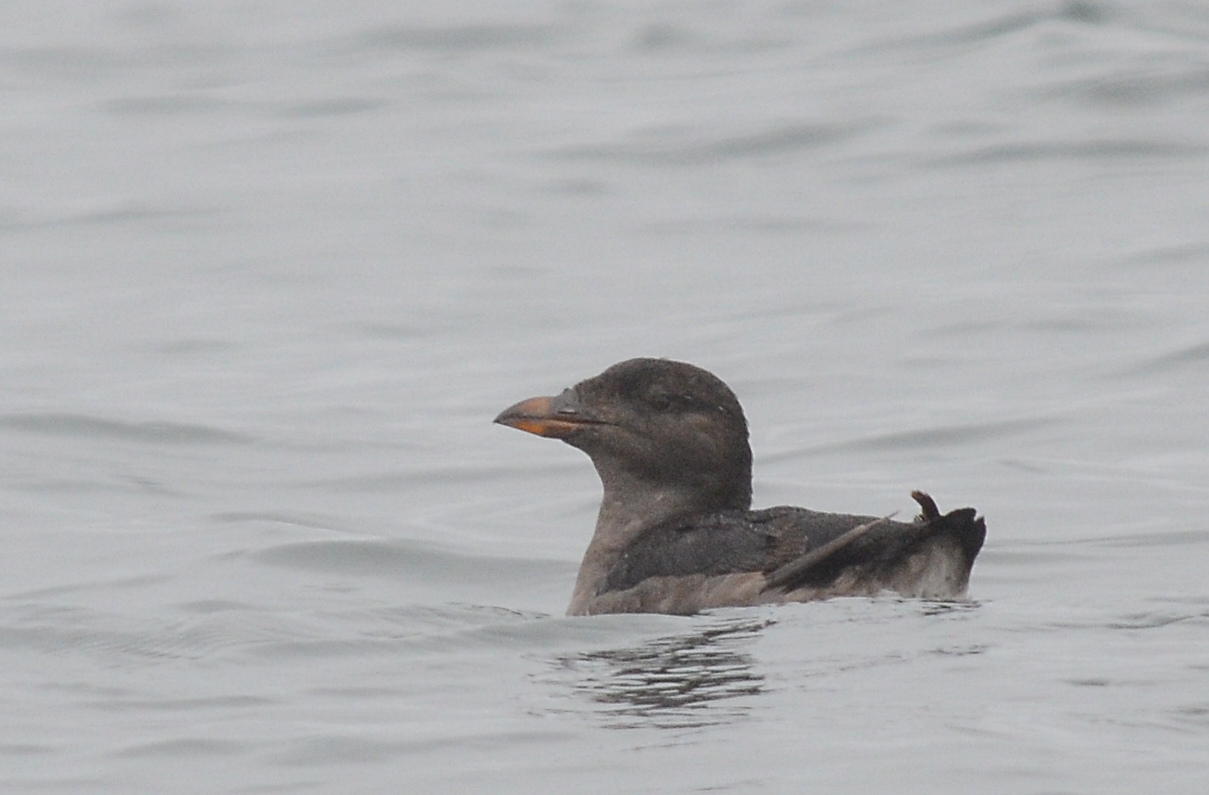 06 Winter plumage rhinoceros auklet. It’s tempting to call this a juvenile, due to its dark eye, but this year’s brood have not likely hatched yet, so I think this is more likely an adult in non-breeding plumage. 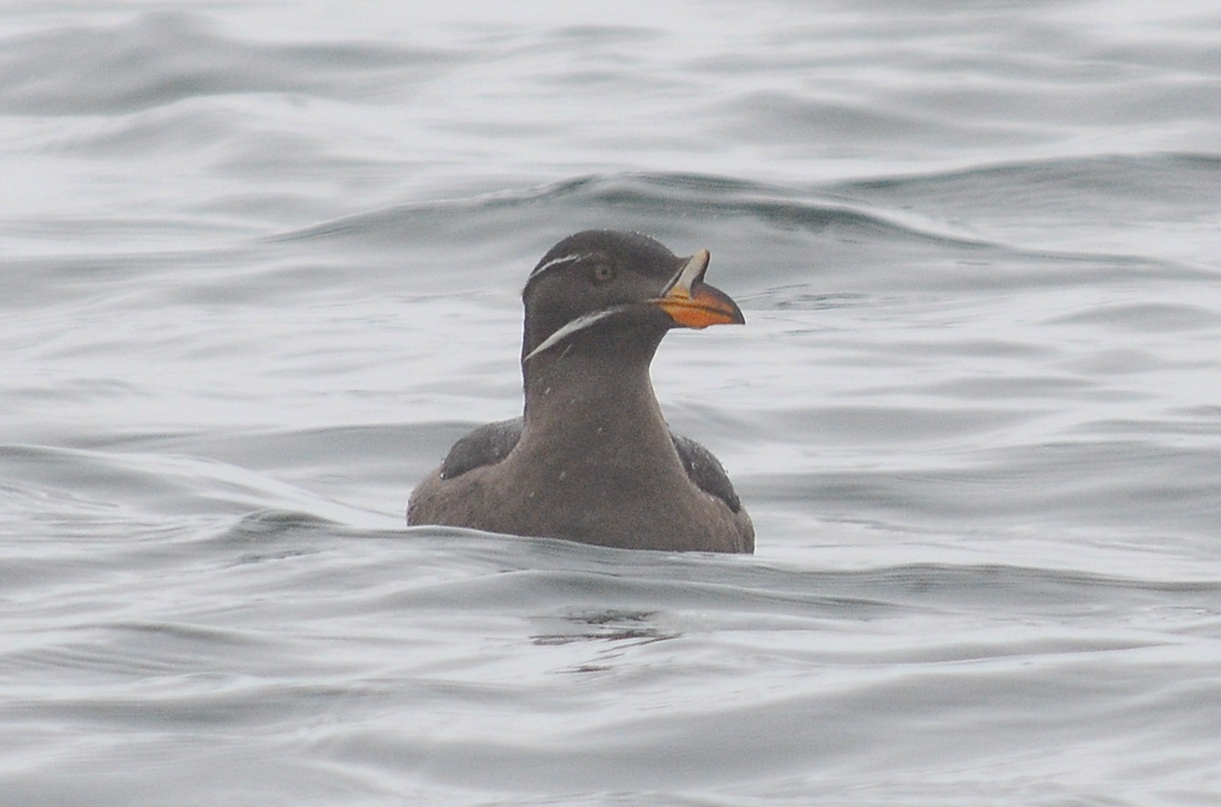 07 Rhinoceros auklet in breeding plumage. This is one of our most inquisitive seabird species.

Bird numbers increased the farther south I went in San Juan Channel. When I reached Salmon Bank, the numbers exploded. Best of all, there were whole flocks of Pacific loons at Salmon Bank. The loons maintained the integrity of their formations by honking at one another. Their calls sounded like a flock of gentle geese.

Normally, Pacific loons are a shy species, much more so than common loons, but today, they allowed me to approach within thirty yards, closer than I had ever been. 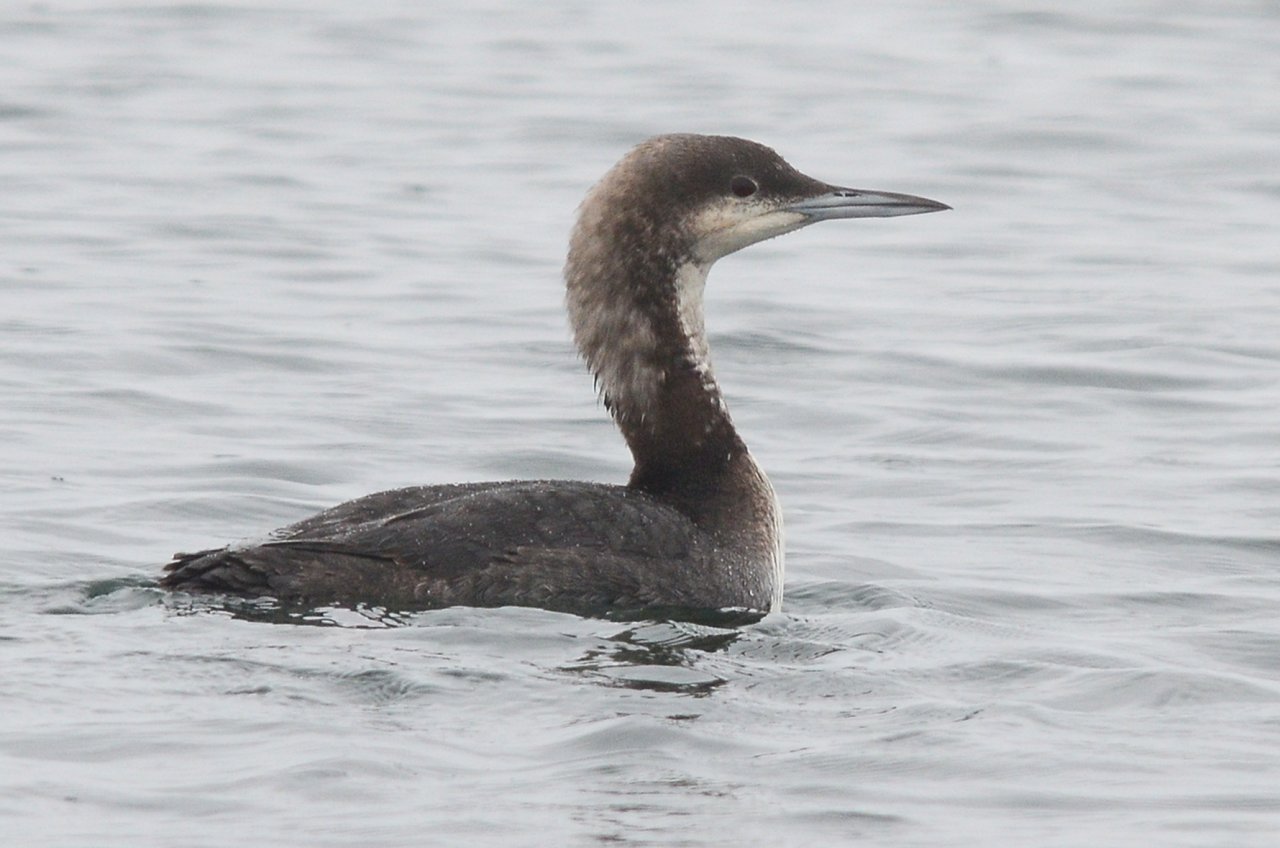 08 Pacific loon at Salmon Bank. This individual has just begun its transition to breeding plumage, visible in the lightening of the back of the head. 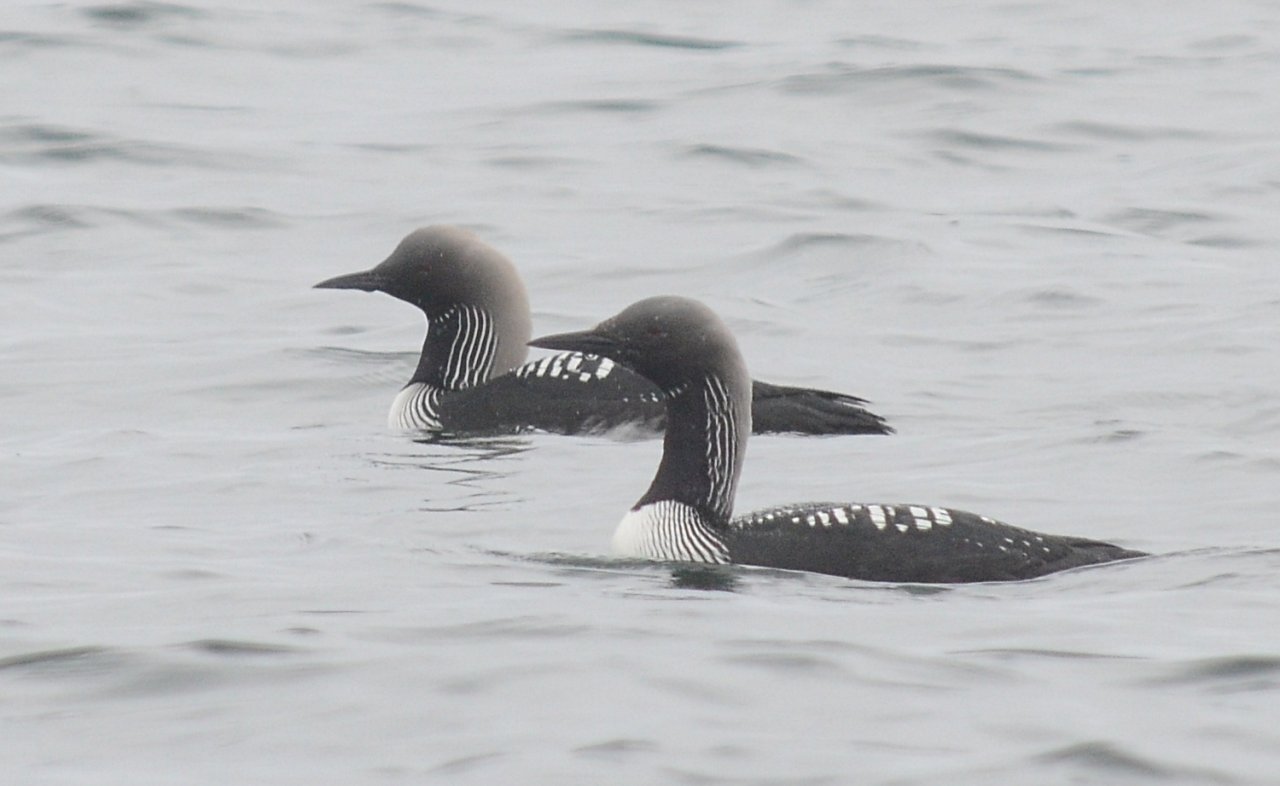 09 Breeding plumage Pacific loons at Salmon Bank. This is our most handsome species of loon. 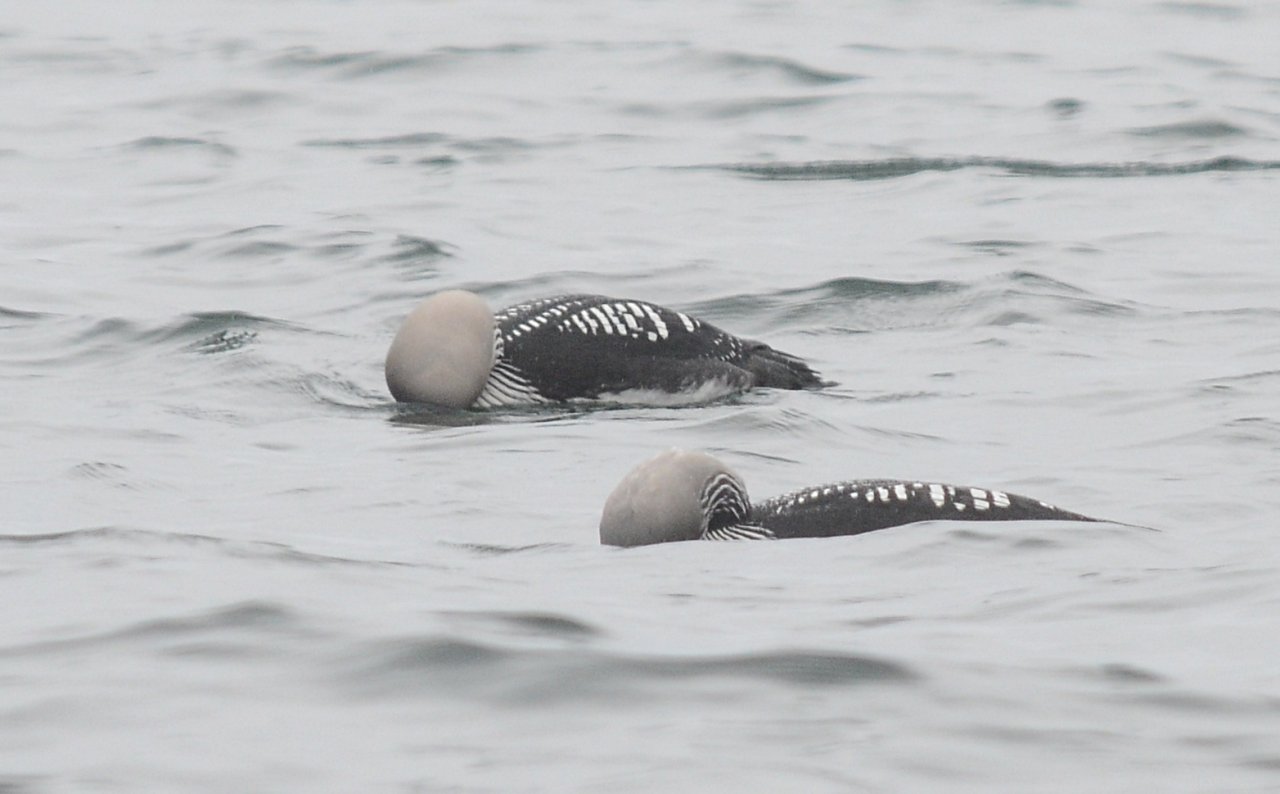 10 Pacific loons foraging. Many seabirds stick their faces into the water to look for prey before they dive.

Unfortunately, I did not encounter any minke whales. I loitered on Salmon Bank, watching and listening, for an hour and a half until the ebb exhausted itself and the flood began, but there were no whales.

At one point, I was certain I heard a whale’s deep, prolonged exhalation, but I didn’t see any spout. The sound did not occur again over the next forty-five minutes. It must only have been one of the harbor seals who were circling my boat, studying me—although harbor seal breaths sound more like short puffs, which this was not.

Who knows? One hears a lot of strange things alone in a kayak.

Perhaps the whales had not yet arrived, or perhaps they were miles south at Hein Bank, which Dorsey says the whales treat as a single foraging unit with Salmon Bank. Or perhaps I simply missed them.

The transition from flood to ebb lasted mere minutes. There was no appreciable slack tide. One moment, I was drifting south and west out to sea, the next I was drifting north and east back into the San Juan island chain.

When it comes to tidal currents, one must yield to the inevitable. I pointed my nose north and rocketed past Cattle Point, bouncing through the tide races so fast I actually outpaced a sailboat. I covered the five and a half miles (9 km) back to my car in just over an hour. 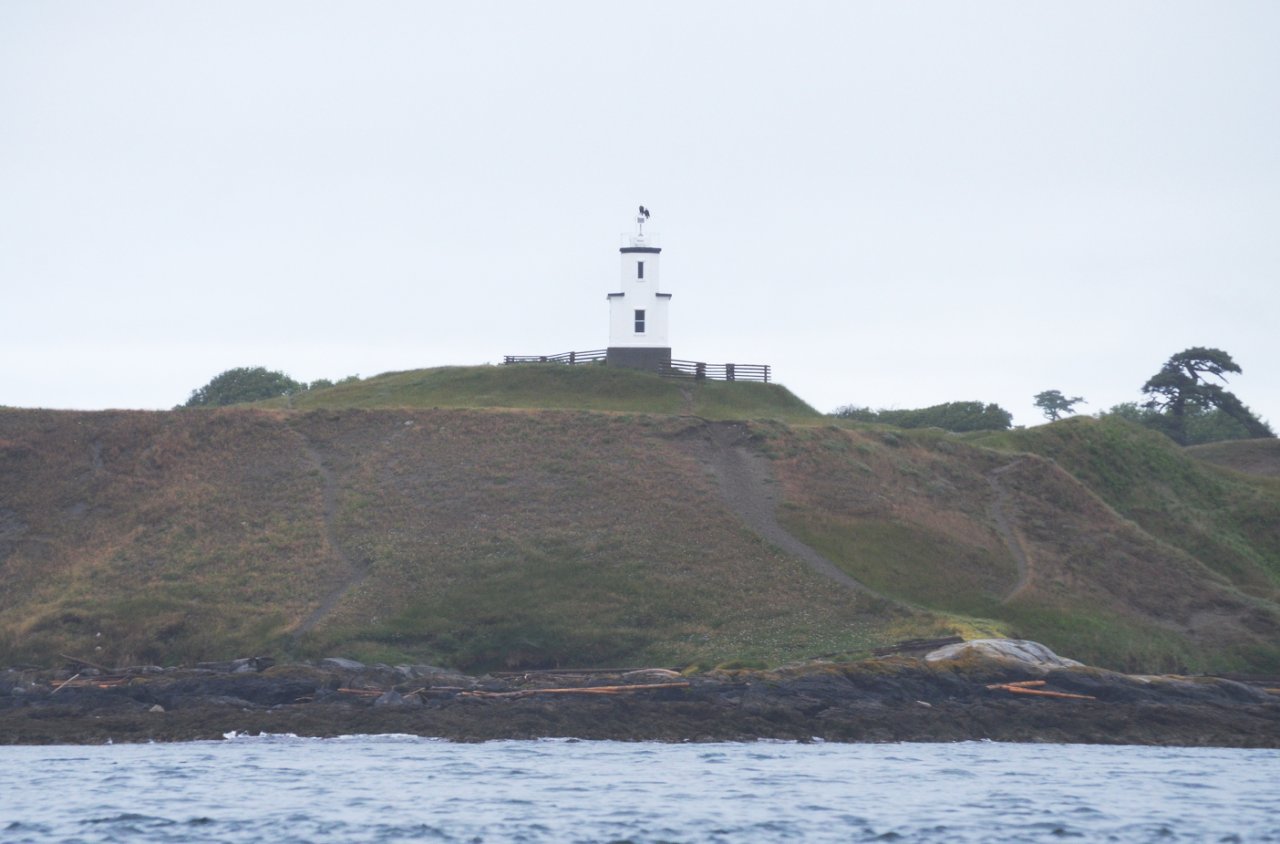 11 Cattle Point lighthouse. Tide races here can sometimes be uncomfortable, but today they were just vigorous enough to be fun.

Despite missing the whales, I was totally satisfied with the trip. This was my best viewing yet of Pacific loons, and a great welcome back to my beloved San Juan Islands.

Dorsey says the minke whales peak in July. It’s just the excuse I need to come again in summer.

Another great report and natural history lesson.
Thanks, Alex!

Great bird photos Alex. Sounds like a great first trip in the new boat. I've always considered my whale encounters just a matter of luck and timing...like many of the good things that happen in life. Your combination of knowledge on favored whale habitat and "water time" is a good formula for success...with patience. Maybe a bit like Steelhead or Muskie fishing? Enjoy the ride!
J

Another great post Alex, thanks. Nice new boat too...

You may have answered this already but I'm intrigued by your on-water photography, particularly of birds, and I'm interested in what gear you use.

As a professional photographer who is always disappointed by my own efforts on the water, I never cease to be impressed by yours. I used to think that you had the advantage of shooting from a barge wider kayak but that excuse has now gone!

Thanks for the kind words, everyone.

My whale hunting took a huge leap forward once I started using resources like the Orca Network, the commercial whale-watching blogs, and the scientific literature. Even with all this research, I only succeed about half the time, but when I do, it’s so much fun. See, e.g,, my trips to Possession Sound (gray whales) and Hammersley Inlet (orcas). I use the same technique for finding rare birds such as puffins.

As for my camera system, I use a waterproof Canon PowerShot D10 (ca. 2009) for most of in-boat scenery shots. You can find this camera used for about $60 USD.

A ten-year-old, 16-megapixel camera with a 55-200mm kit lens is not a very powerful setup for wildlife photography, especially shooting from a moving kayak, and especially since the D5100 doesn’t perform well at light sensitivity higher than ISO 800.

My secret is to wait until the bird or animal gets very close. The auklets above were only about forty feet away, the loons eighty or ninety. Even at these distances, the sharpness and focus are never perfect—the pitfall of cheap gear. Of course, the gear cost about four times as much back when I bought it!

There goes another excuse re photos from the kayak.