Standing shivering in the wind and rain as we gobbled our pre-launch sandwiches, it was hard to be inspired. The cold was underlined by contrast from the warmth of the car. Still, we’d arranged time off, driven from Vancouver to get here, and paid for the ferry; who knew when we’d have an opportunity to camp again? So we carried on, portaging the boats and cargo to the beach, and playing the Tetris-like game of fitting it all into the confined cargo areas of our skeg kayaks. 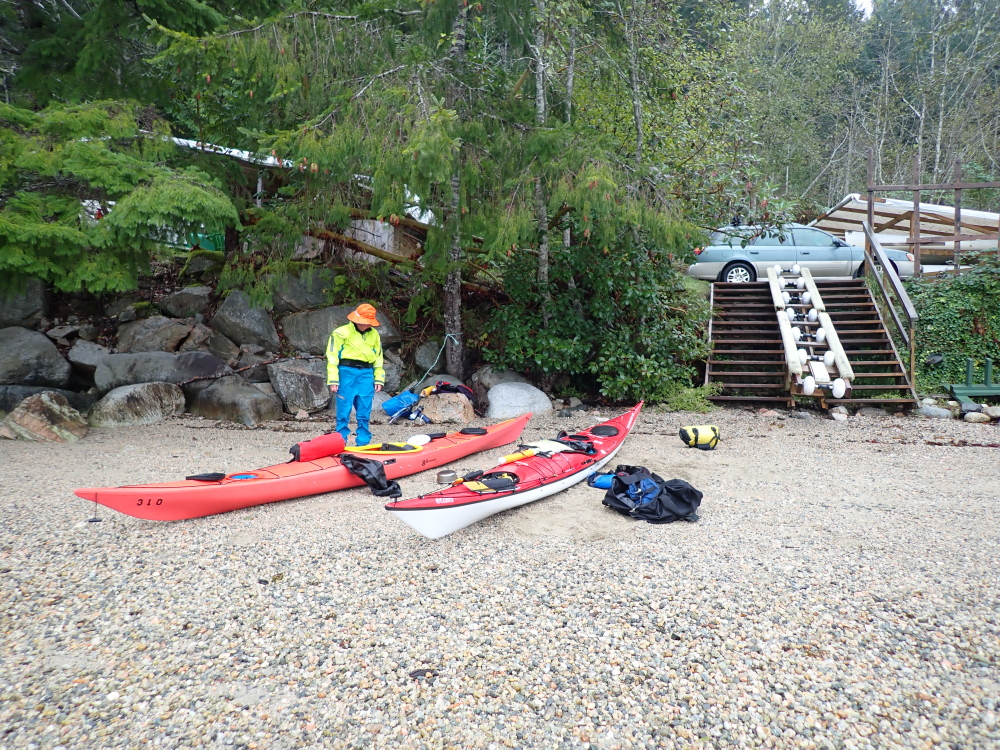 Our perseverance was rewarded very shortly after we launched - the rain changed from driven to just falling, and then eased off further to drifting showers. Soon it was merely what the Irish call “soft” - white mist drifting along the hill tops. 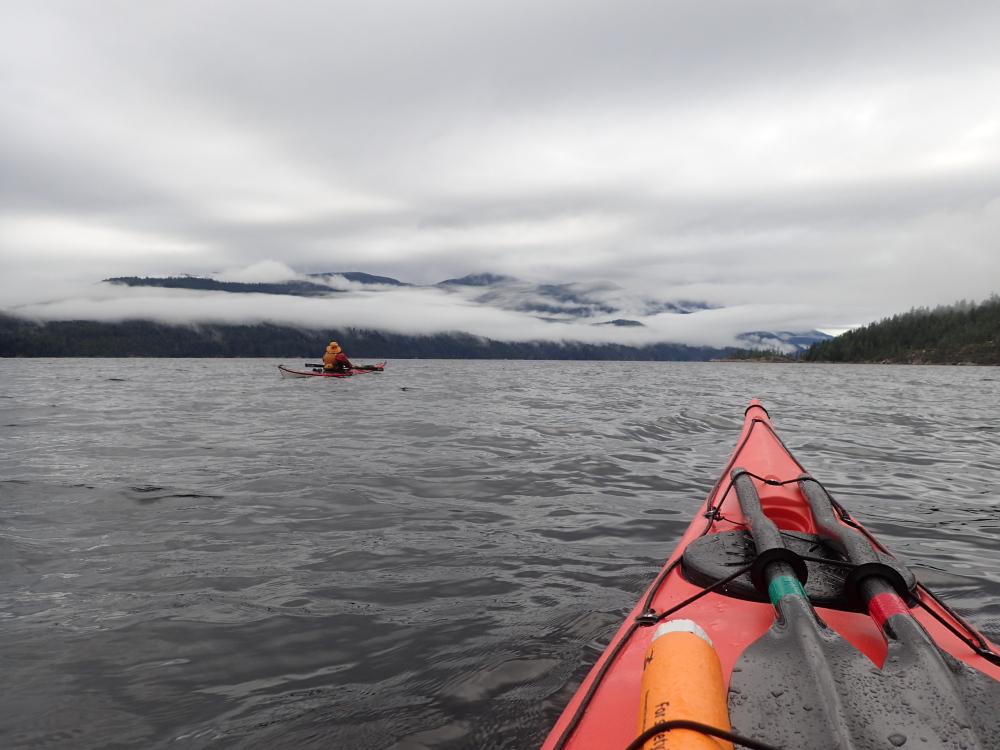 After just an hour and a half of paddling, we reached Nine Mile Creek, our home for the weekend. With the short late autumn days, and the rainy weather, we wanted to land in plenty of time to make a secure camp by daylight. 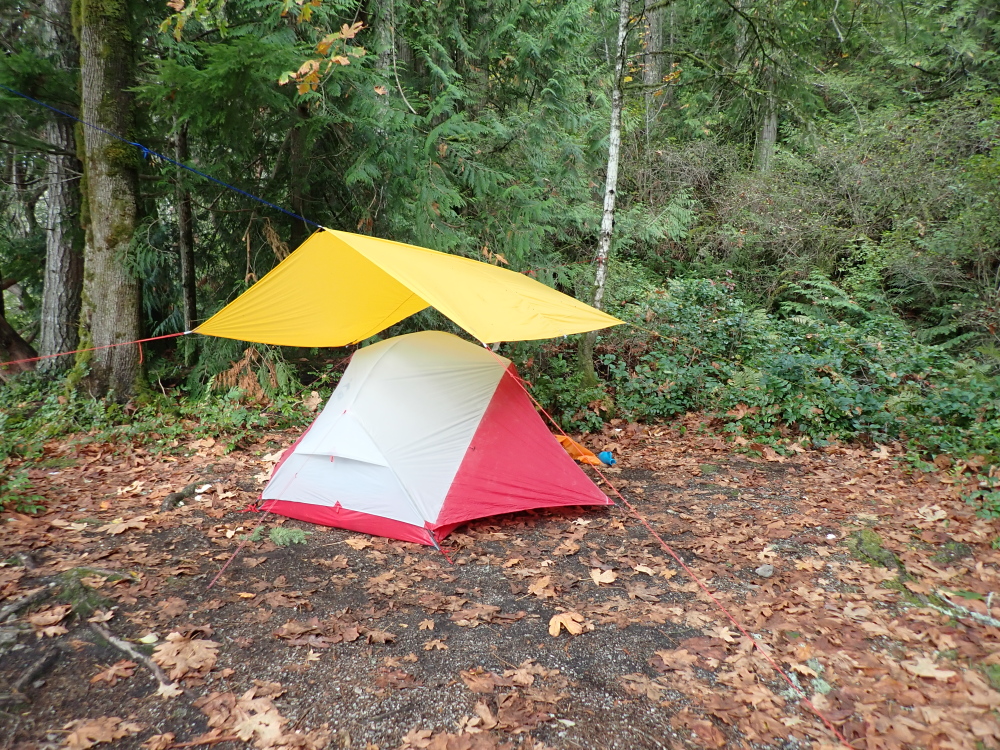 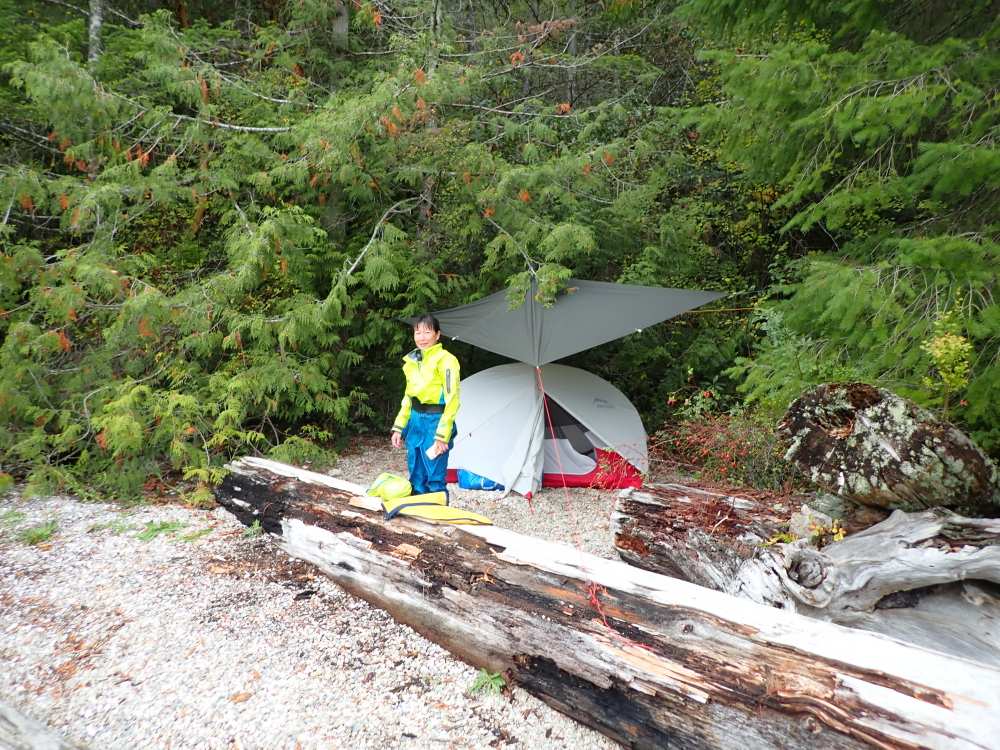 As we rigged our tents (each under its own tarp to minimize condensation in cold rain) and the kitchen/dining room tarp, we saw ever-expanding scraps of blue sky, so that by the time my trip partner, Melissa, was cooking supper, we had a full-on sunset. Dinner was excellent - a beef stew she brought from home, and homemade cake for dessert (Melissa, was a professional chef in a previous incarnation.) After dinner, we were treated to a show - spectacular bioluminescence. We took turns kicking up the water with our boots to ignite miniature galaxies in the sea, like kids splashing in mud puddles. 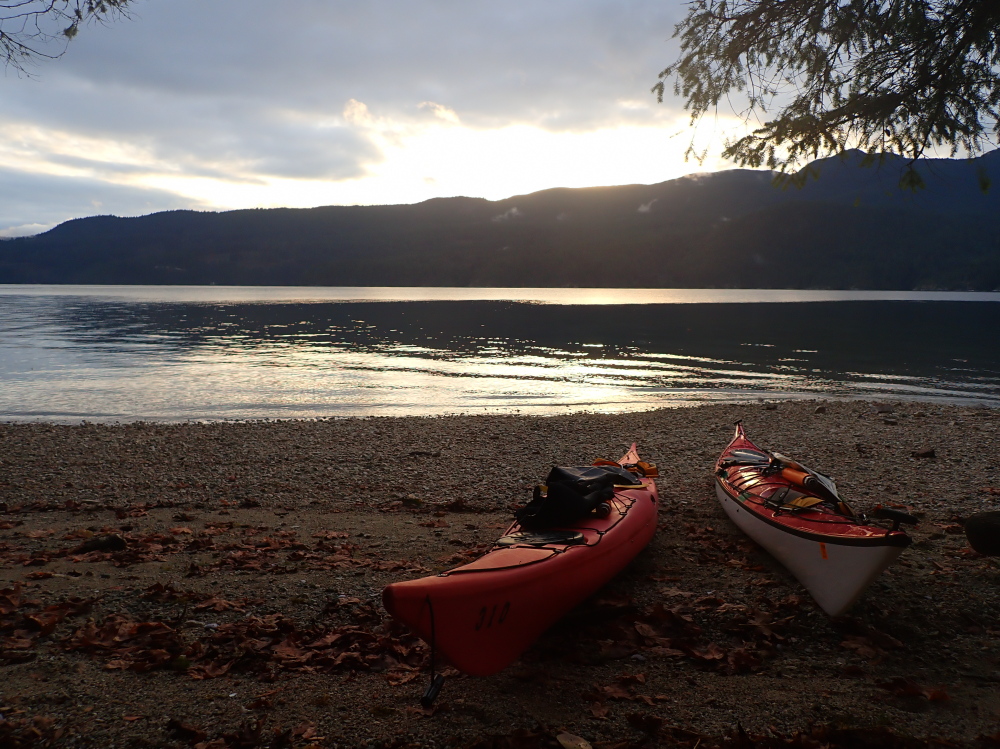 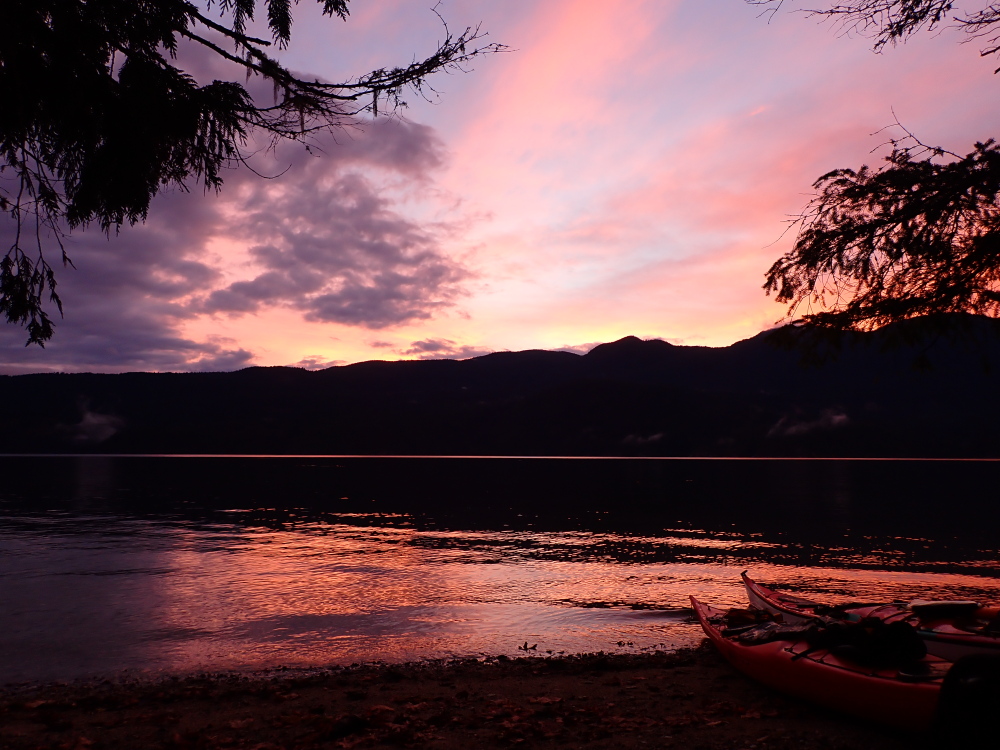 As always, I slept far better in a tent than in a house, so I dozed in until 9AM. Once finally awake, I hustled up a brunch of bacon and pancakes (the latter fortified by blueberries Melissa had brought). 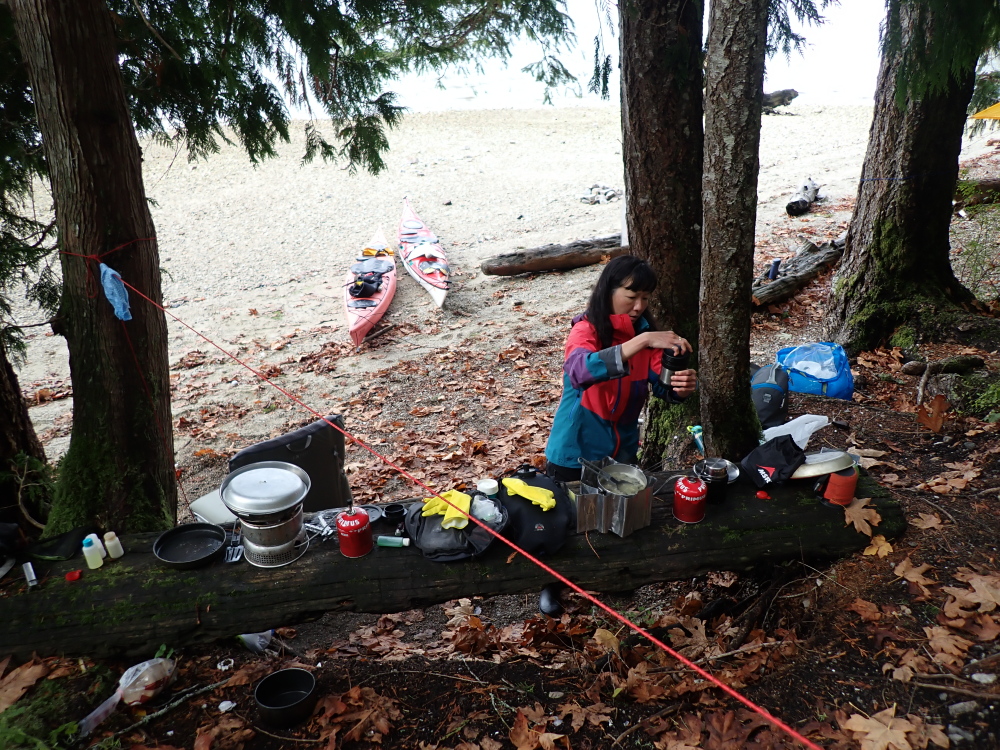 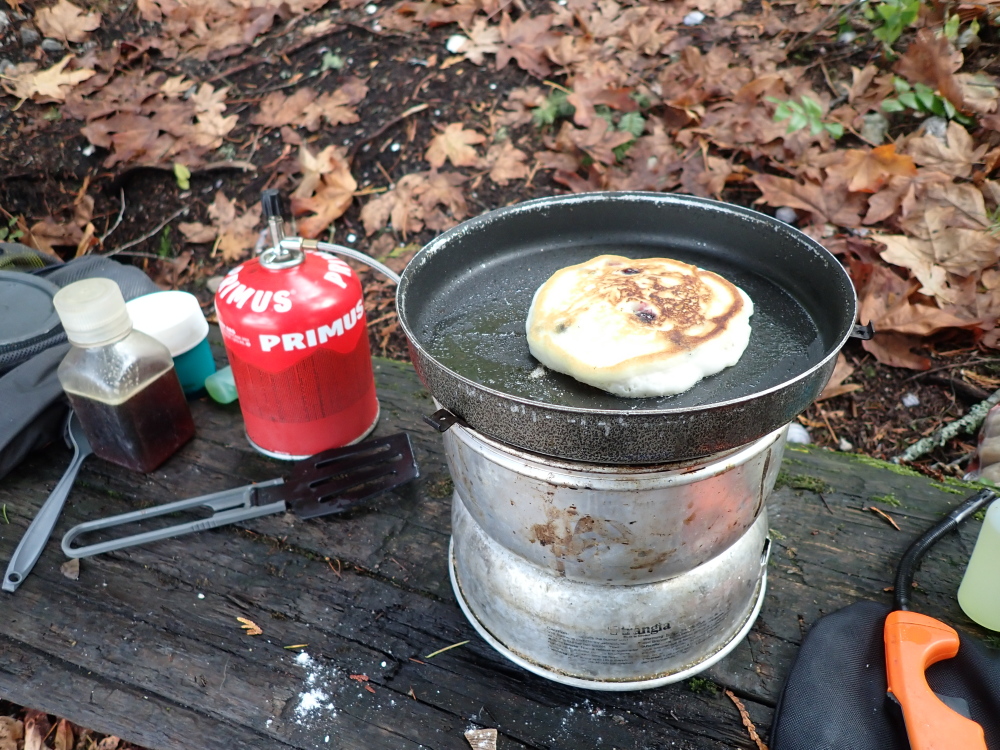 As we were setting out for our day trip, a couple arrived in a canoe - the only other campers at this site the whole weekend. They set up on the other side of the creek, so there was plenty of space and privacy for all.

We arced around Nine Mile Point and wandered east up Salmon Inlet for a mile or two, landing at a former log loading pier for a break, and filling up the back compartment of my boat with cedar strips we hoped would be dry enough for a campfire. 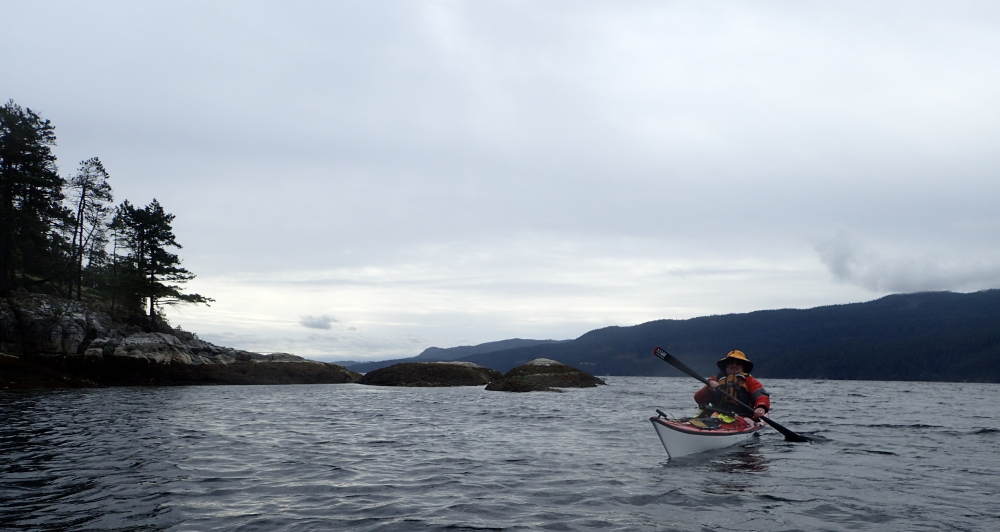 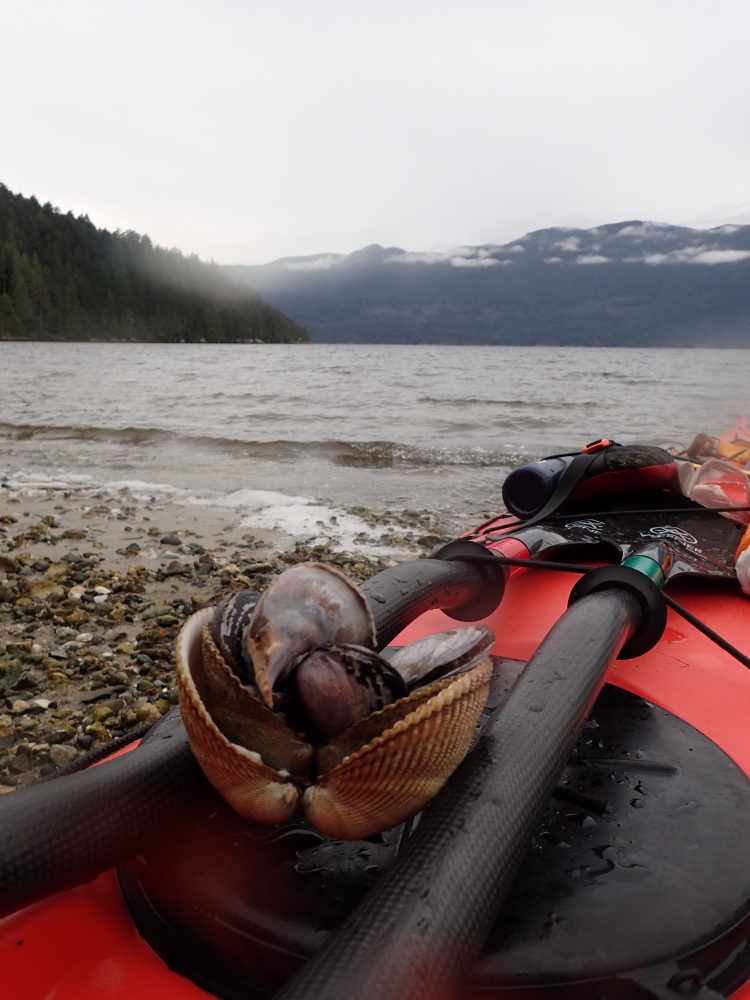 I snaked close to the shoreline on much of the way back, both to practice my rudder and draw strokes, and to check out the intertidal life. I was happy to see several individual purple Sea Stars, though nothing like the vast clumps I remember from the years before wasting disease decimated them. Further offshore, vast armadas of moon jellyfish ghosted along beneath the surface.

Back in camp, Melissa donned a swimsuit to hit the creek for bathing, so of course I had no choice but to do likewise. Pretty chilly getting in, but very refreshing to be clean. 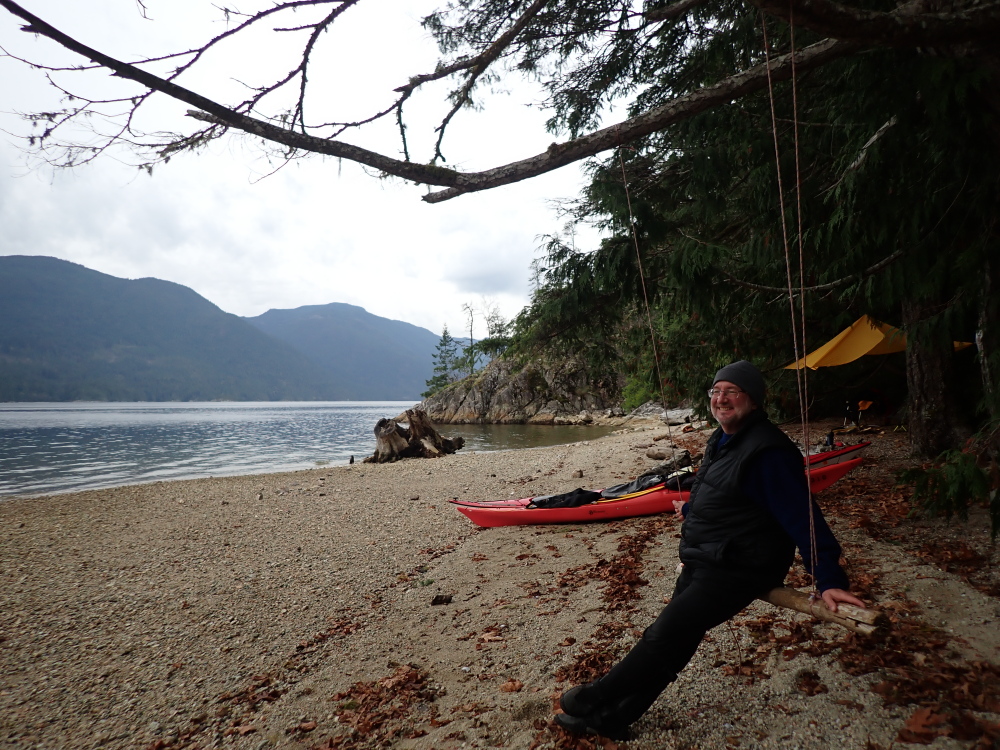 It was my turn in the galley for supper, and I prepared my go-to dinner. The rain kindly held off as I cooked. Melissa had kind words about my dish, which meant a lot coming from a pro. We made an attempt at a fire, but with only a hatchet rather than a full-on axe, I hadn’t been able to cut deeply enough into the cedar logs to access truly dry wood, so we never got it to the self-sustaining stage where it could dry its own fuel. So eventually we packed away the whiskey and headed for our respective bedrooms. 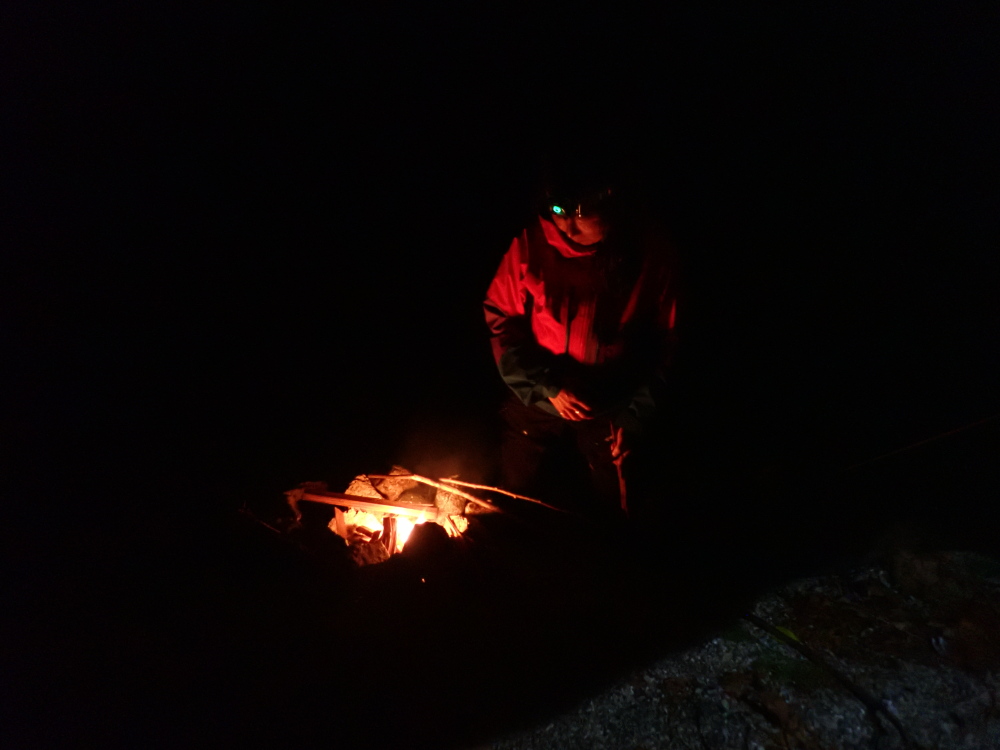 Once I was snugged up in my sleeping bag with my book, Mother Nature let loose with some serious precip. With the combined tarp and tent, it was simply a cozy feeling to hear the rain drumming above.

By the time I’d finished sleeping in again the next morning, the rain had spent itself, so our paddle back to the put-in was perfect: pleasantly cool, with millpond smooth water. Melissa detoured enroute to check out an oyster farm and to take the artsy submarine shots you see here: 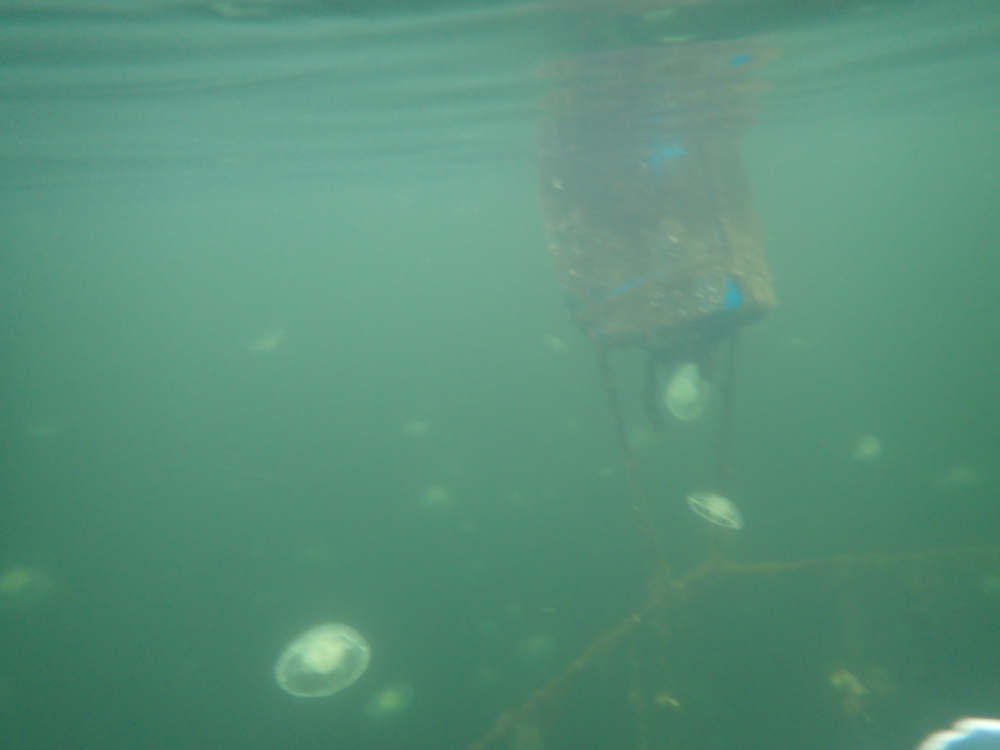 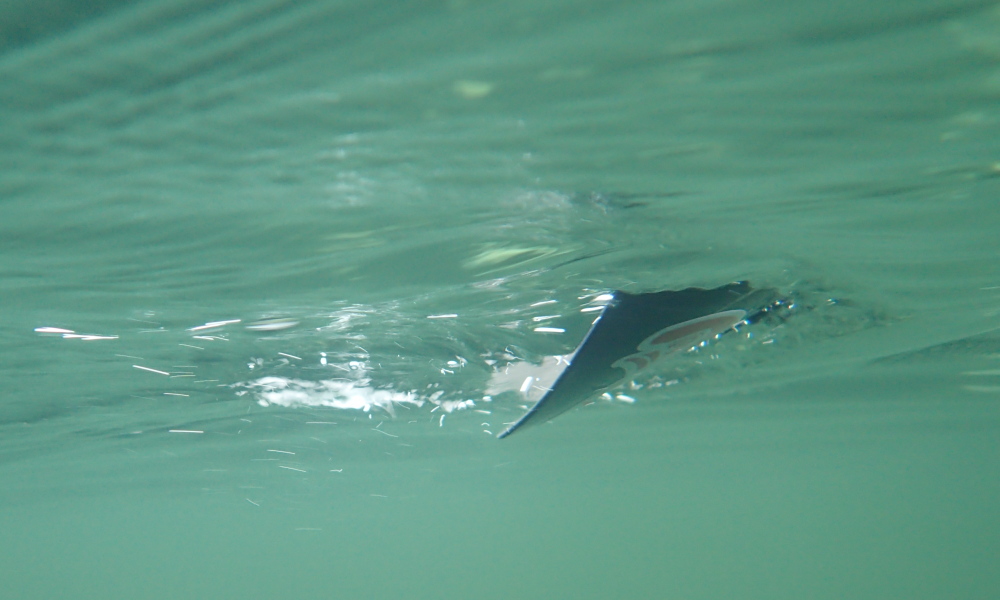 Much thanks to Pedals and Paddles for the use of their launch site and parking. Even if you’re bringing your own boats, it’s well worth spending a few dollars to launch from here - you’re saving paddling time to get beyond cottage country, and your vehicle is in a secure, gated spot.

Thanks for posting this trip report. Lots of good information for that area. I would gladly pay for a nice launch area and secure parking. Looks like you had a nice time.

I will be SO happy when we from Oregon (A.K.A. Canada-lite) can once again visit. Thank you for the inspiring stories and photos. When I read about those meals, I think it’s time for me to move beyond oatmeal for breakfast, clif bar for lunch, and instant mash potatoes w/topping from a foil bag for dinner. But I just don’t have the courage. Or, as that great philosopher Dirty Harry once said, “A man’s got to know his limitations."