I'm new to sea kayaking and trying to figure out exactly how to read the slack tides. My understanding is that slack lasts about 2.5-3 hours after tide max and min. Am I missing anything? We're planning a test trip up Indian Arm and an August trip through the Gulf Islands.
J

Depending on the location, the relationship between high and low water (high tide, low tide) and current (max flood, slack, max ebb) can be either simple or perplexing!
'Around here' -Gulf Islands/Victoria for me - sometimes it just doesn't seem to make sense - I still find it confusing.
I try to check for Current Stations and Secondary Stations (in the Tables) and get current info from there, if possible. Sometimes slack water in passes/passages can last for only a few minutes.

The relationship between currents (flood, ebb, and slack) and tides (high, low) is something that is best learned visually. I recommend going to deepzoom.com. Click on a yellow square tide station, so you can see a graph of the tide. Then press play so you can watch the arrows that show the current.

Here's an example, comparing a current station in Rosario Strait to a tide station in nearby Strawberry Bay. 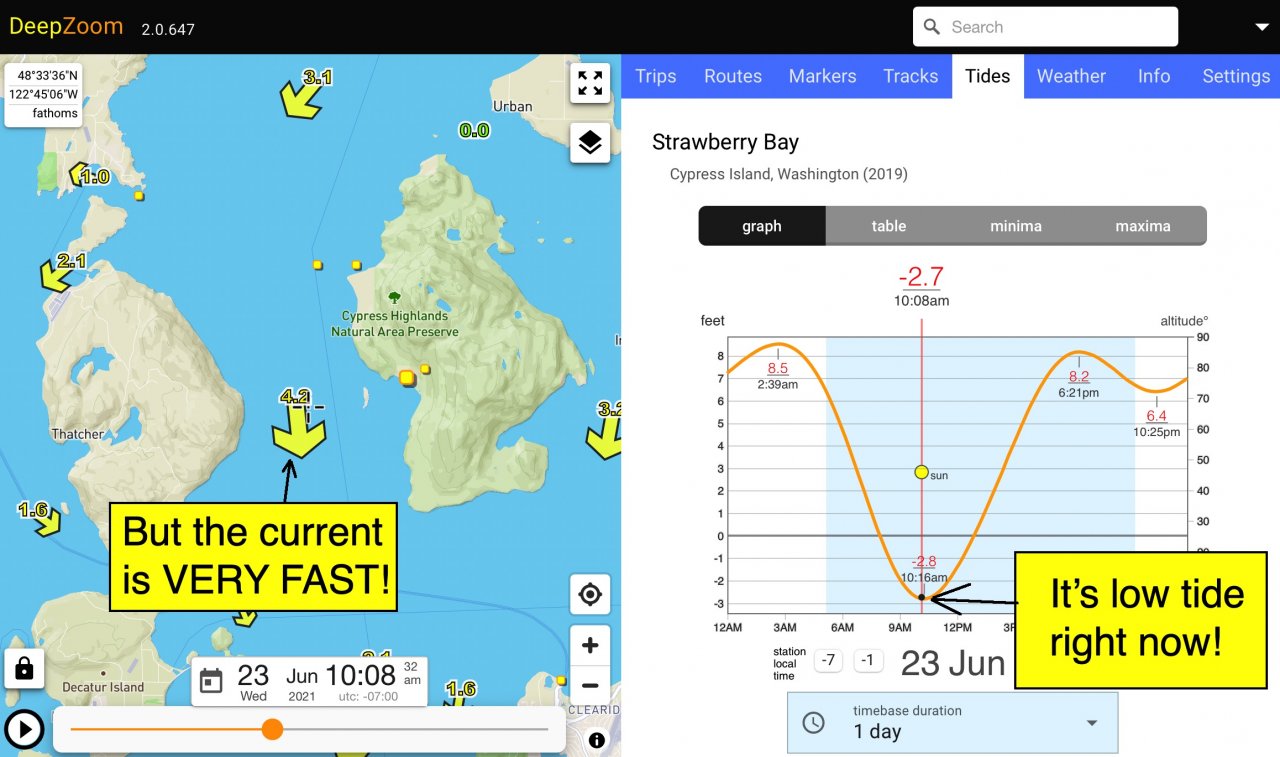 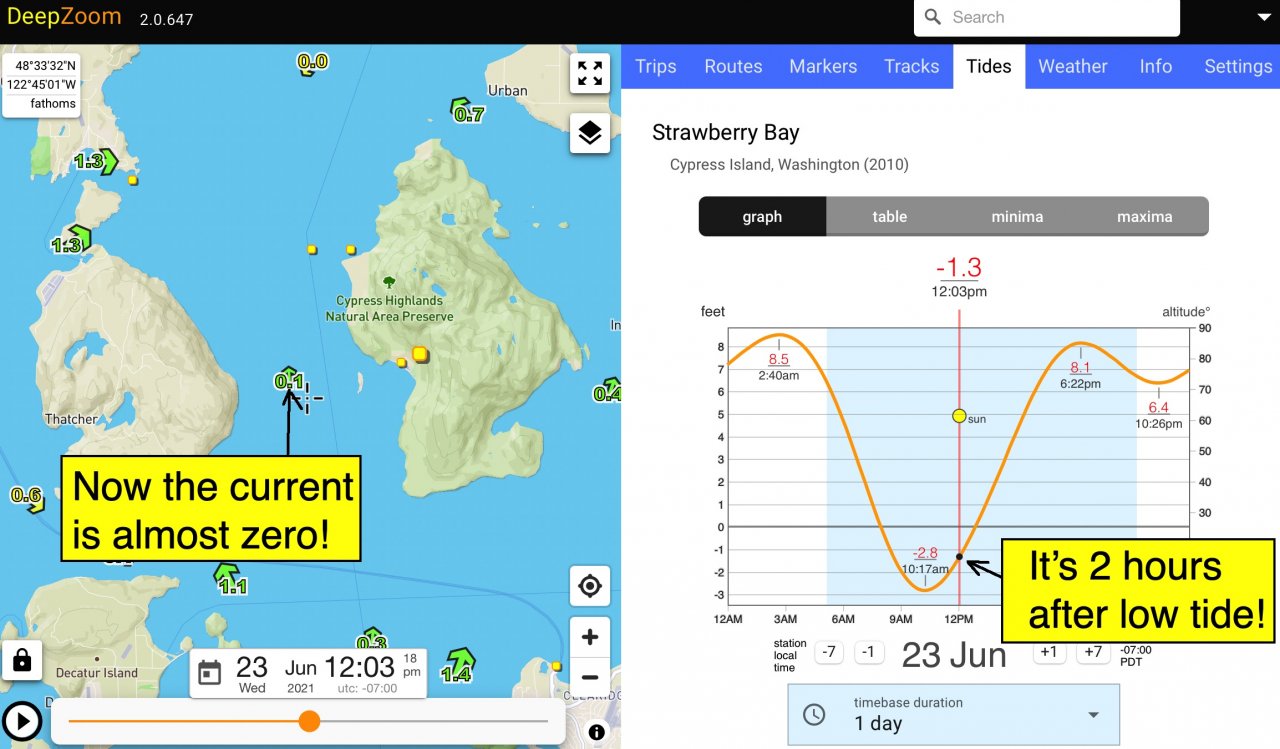 But the delay between high or low tide and slack current is not always two hours. It varies tremendously, from a few minutes up to many hours. It's a complicated relationship. Your best bet is to consult current tables, not tide tables. If you use tide tables to travel at "slack tide," you'll very rarely encounter "slack current." You'll more often encounter fast currents, sometimes very fast.

For this reason, I don't like to say "slack tide." A better term for a high or low tide is the "stand of the tide," but almost no one uses this term.

IMHO a better term for a high or low tide is "high tide" or "low tide" ;-)
And here are a couple of current & tide plots for Campbell River, showing the lag (or lack thereof).
Campbell River is in the middle of a channel with fast currents - and both ends of the channel lead to the ocean.
This might explain how the tide can still drop some after the ebb current has changed to a flood current.
So if you are dealing with fast currents, look at current tables or graphs.

We have one place where the tide runs at up to 7 knots. Slack water is generally about 20 minutes. Meaning, it all depends where in the world you are.

Alex and Nootka have a very complete response. Here is a short summary of some key points.

Just re-emphasizing what JohnA and Peter-CKM pointed out upthread: tide refers to the vertical movement of water - I.E. how high or low the water is over the seabed. Current refers to the horizontal movement of water - how fast it's flowing. So you're not looking for the times of high and low water: you want the time of slack water as given in the current tables downloadable from Canadian Hydrographic services.

How long slack current lasts is inversely proportional to how long the peak current speed was/will be on either side of slack. The faster the peak, the shorter the slack. The formula is Period Of Slack Water* (in minutes) = 60/speed of maximum current

JensVS, I see that is your first post. Welcome to the forum. Note that the DeepZoom app shown in the above posts is great for getting feel for the currents/tide around the San Juan Island in Washington. Similar software with wider coverage is AyeTides.

I try to find three sources for such data with the goal of finding two that agree. There can always be a misprint. For example, around here there are free trail maps at XC-Sking trail heads. I noticed the UTM coordinates on one looked strange and when I put them in Google Earth, the point was somewhere in the mid-west; not Oregon. So the point is, just because it’s in print doesn’t make it true.

For me, tide is more a convenience issue. It’s handy to load and launch with an incoming tide, otherwise you are continually moving your boat (which is getting heavier as you load it, down to the water. In that case, it’s better to move all your gear to a “loading zone” near the boat first, instead of running back and forth to the car.

Same with landing at the destination - the higher on the beach, the shorter distance to camp site and better idea of how high you need to store the kayak. If the area is fronted with a long tidal flat (thinking of FreshWater Bay) you don’t want to be hauling boat/gear over long stretches of soft sand.

Also, current direction/strength would be my prime concern. There are some places where it won’t make any difference. There are others where you won’t make any headway - may even travel backwards - if you time it wrong. Twice, I’ve been at the wrong place (Toe Point - east end of Patos Island, west of Sucia) at the wrong time and couldn’t make any headway to the beach entrance on the west end of Patos until I moved away from the shoreline into deeper water.

A thrill is when you do your homework and it works out that you’ll have a 2.5+ knot current “push” in the direction you want to go. Less thrilling if that current is in the opposite direction.
Last edited: Jun 18, 2021

A thrill is when you do your homework and it works out that you’ll have a 2.5+ knot current “push” in the direction you want to go. Less thrilling if that current is in the opposite direction.
Click to expand...

I have a computer program that tells me what time to launch at a local beach in order to go through Seymour Narrows with 8 knots current. It took some trial & error to get it right as the beach is 23 km from the Narrows.

Does anyone have any idea of slack timing for Cape Scott? Or know which way it floods and ebbs? I have the tide tables for there but there's no current stations anywhere nearby. Also any thoughts on currents going around Brooks? Because it's a longer paddle going around the peninsula it won't really matter when slack is but knowing which way currents go might be helpful.

Thanks, Nootka.
The .pdf (download link on the GoogleBook page) of those Sailing Directions is now filed away here.
The older editions of Sailing Directions (and Admiralty Pilots) are IMO more useful for non-power (sail or paddle/row) vessels than the up-to-date ones.

cougarmeat said:
For me, tide is more a convenience issue. It’s handy to load and launch with an incoming tide, otherwise you are continually moving your boat (which is getting heavier as you load it, down to the water. In that case, it’s better to move all your gear to a “loading zone” near the boat first, instead of running back and forth to the car.

Same with landing at the destination - the higher on the beach, the shorter distance to camp site and better idea of how high you need to store the kayak. If the area is fronted with a long tidal flat (thinking of FreshWater Bay) you don’t want to be hauling boat/gear over long stretches of soft sand.
Click to expand...

On the Bay of Fundy, you always hope to launch and land on high tide or else there can be a long walk on slippery rocks

I understand your concern with current and the answers here should help you start your education. However, for Indian Arm, in summer, paddlers' concerns are more about wind than tide and or current. If the chart does not have any current indication for an area, this usually means that the current is not more than 5 knots at anytime. In Indian Arm, currents are typically less than 2 knots at maximum flow. Sometimes, it does feel like I'm paddling in mud because I'm pushing against a small current, but its annoying at most. The bigger, much bigger, concern is the afternoon inflow wind on hot summer days. These winds are from the south on the Arm and all other north-south bodies of water on the coast. They are usually accompanied by white caps, which make traveling downwind treacherous and upwind exhausting and wet.

So, for Indian Arm, at least, choose your paddling time based on wind not tide.

In other words, be aware of local conditions.
Do some research; ask here if needed.

To avoid repetition of already mentioned points, here's my 2 cents.
Current-find out where it MATTERS. Unfavorable current can be negligible, a nuisance, an impediment, or a serious hazard. Indian Arm for example, negligible. Sechelt Rapids, aka Skookumchuck, can be deadly if you get timing VERY wrong. In the South Gulf Islands, Active Pass, Boat Pass, Dodd Narrows and maybe some others can run fast enough to be unpassable or seriously turbulent. Many other parts of Gulf Islands have potential nuisance current that can be confusing to figure out. My best advice is to Google current through the passes you are thinking of paddling, and potentially re route the trip to match if needed.
Cheers
Dmitri
J

Hi everyone, thank you so much for sharing all your insights. As mentioned above, our trip to Indian Arm was not affected by current and we timed the winds to get a bit of push.

I'll be doing some actual research to fully understand the complex relationship between current and slack to plan our trip to the Gulf Islands. We'll head there in three weeks. Very excited!

I have the map which has some info and I'll be searching for three different tide tables. Can you recommend good and trustworthy apps?

The government site is what I use. You can get a seven day prediction of tide heights, with the heights shown in one hour increments all on one handy table.

The current tables are available as a PDF somewhere on that site as well.
J

I find the (paper) Current Atlas to be useful.
https://publications.gc.ca/site/eng/366181/publication.html 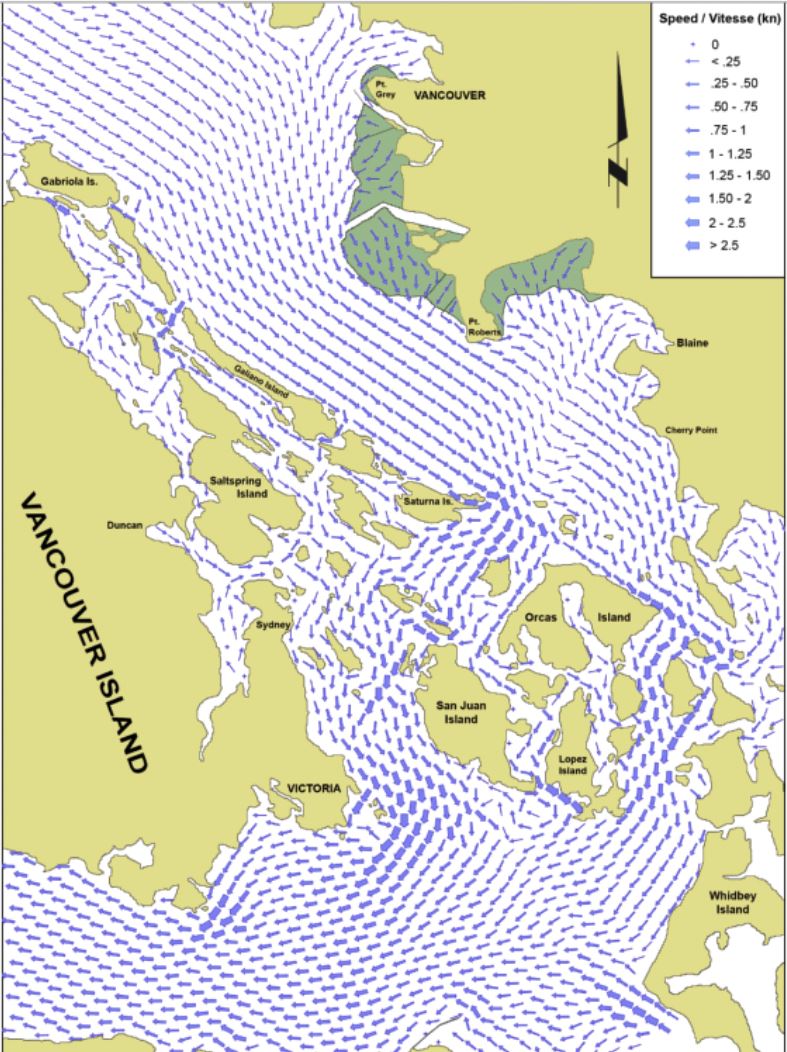 There are apps which use the images from the current atlas and the info in the 'cheat sheets'.
Here's one:
https://appadvice.com/app/pnw-current-atlas/1456020312

Borsboom 'cheat sheets' which save you the trouble of looking up the tide heights at Pt Atkinson:
https://borsboom.io/current-atlas-tables/
Last edited: Jul 28, 2021
P

I bought tide books but mostly rely on DeepZoom for tide and current conditions at various times of the day. I also use the Windy winds app for local conditions for the San Juan’s…
You must log in or register to reply here.
Share:
Facebook Reddit Pinterest Tumblr WhatsApp Email Link
Top