Warm Winter Paddling On the Lakes of the Okanagan Valley

It has been an astoundingly and abnormally warm winter here in the Okanagan Valley. Aside from the fact that this is likely more evidence of the reality of global warming, there has been an up side. It has been very much like living on the Coast here this year thus far, though winter has finally arrived this weekend. The upside is that the wildlife, the California Big Horns, the Deer and even the waterfowl are having an easy winter, as am I. I have even managed to get out paddling on the lakes a few times in the past few weeks. Unheard of, paddling in January, when the lakes are normally ice rimmed if not entirely frozen at this time of year. Hard choices, paddle or XC ski. 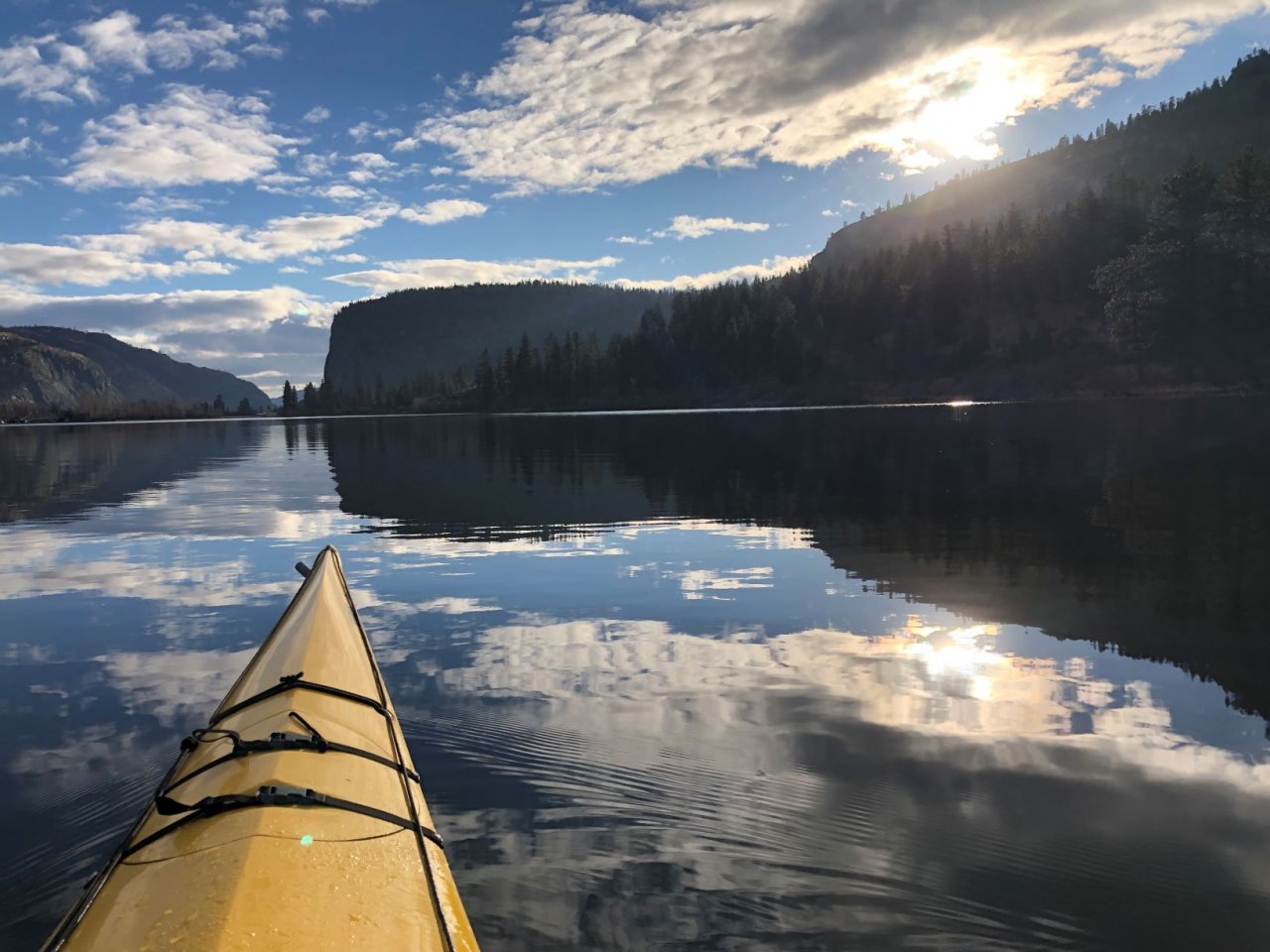 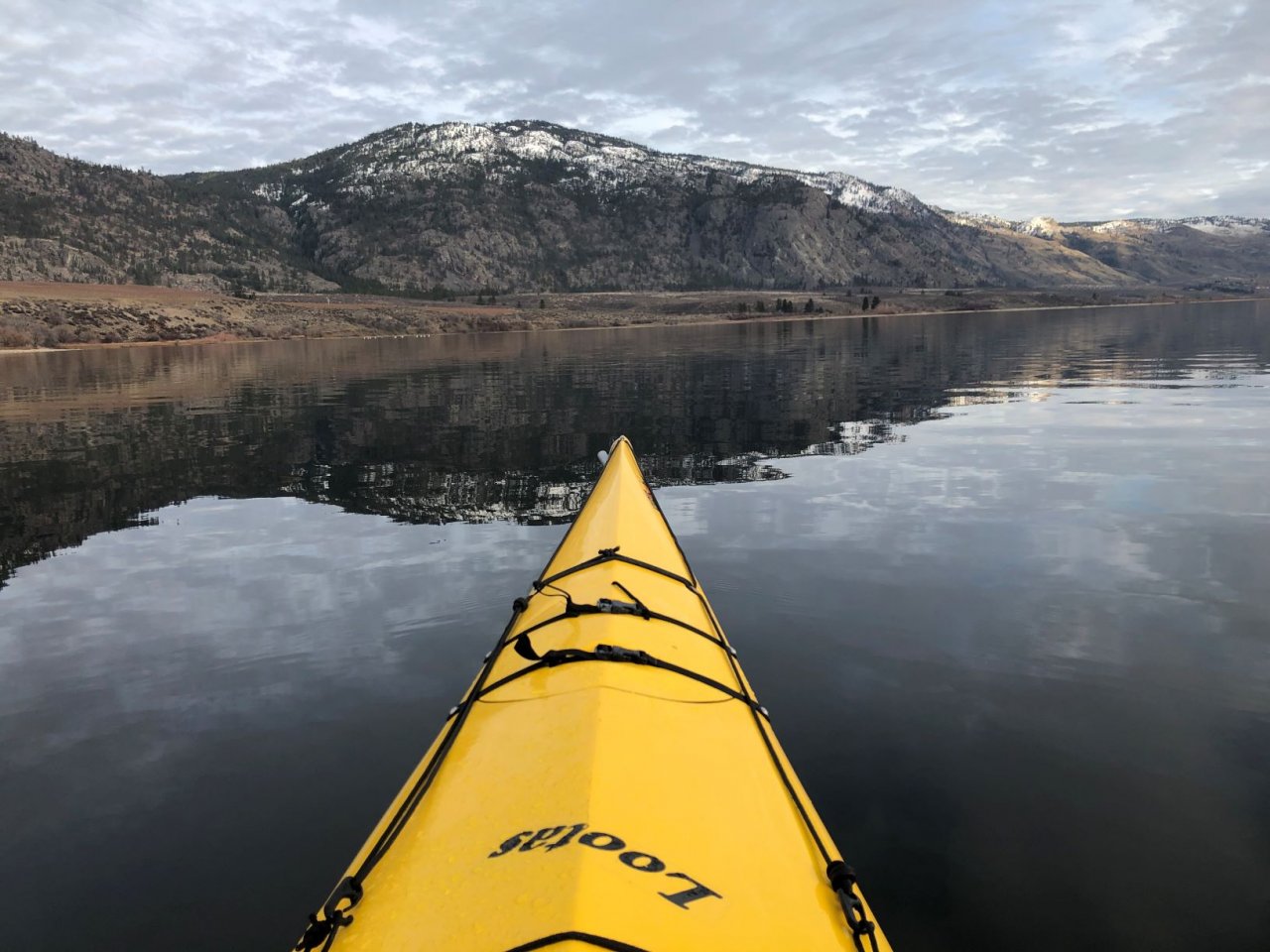 The lake in the top image is Vaseaux Lake, a small lake, perhaps 3 kms in length. But Vaseaux has the distinction of being at the narrowest part of the Okanagan Valley and also the wildest section. Vaseaux Lake itself is a federal migratory bird sanctuary. It is also situated between two large protected areas, one of which is slated to become part of the South Okanagan National Park reserve in the future. It is a non-motorized designated lake and is never crowded, even in the heat of summer when the rest of the lakes in the valley are tourist and power boat heaven. There are many waterfowl and other birds that frequent Vaseaux Lake all year round, species changing according to season. On my paddle last week, I saw Swans, Trumpeter and Tundra, both Common and Hooded Mergansers, Scaups, Barrows Golden Eyes and of course the ubiquitous Canada Geese and Mallard Ducks. This particular day, the temperature got to 8C, the normal is 0C.

The Southern end of the Okanagan Valley is less populous that further north. The lake in the second image is Osoyoos Lake and it straddles the Canada U. S. Border. The west side is largely orchards and vineyards with the town of Osoyoos straddling the lake at its narrow middle. The east side is first nations band land and a good swath of it remains wild sage and arid bench land.

There is also a very good chance that you may encounter some of the California Big Horn sheep here in the winter months. They are often about and in fact every winter, rams spend time in my neighbourhood, even in my yard. Below is an image of a flock of ewes on the bank just above the highway on the east side of Vaseaux Lake taken last winter. The second image is a group of rams on the rimrock across the road from my home, also last winter. There is a lone ram that has been sleeping just outside my back deck in the past few days, but I haven't been able to get a good image of him yet. I am privileged to live right on the interface of the nature preserve lands that make up a large part of the southern Okanagan Valley. Wildlife here is used to humans and is not particularly shy. Sheep, bears, deer, many birds such as California Quail and raptors of various kinds are common in the uplands. 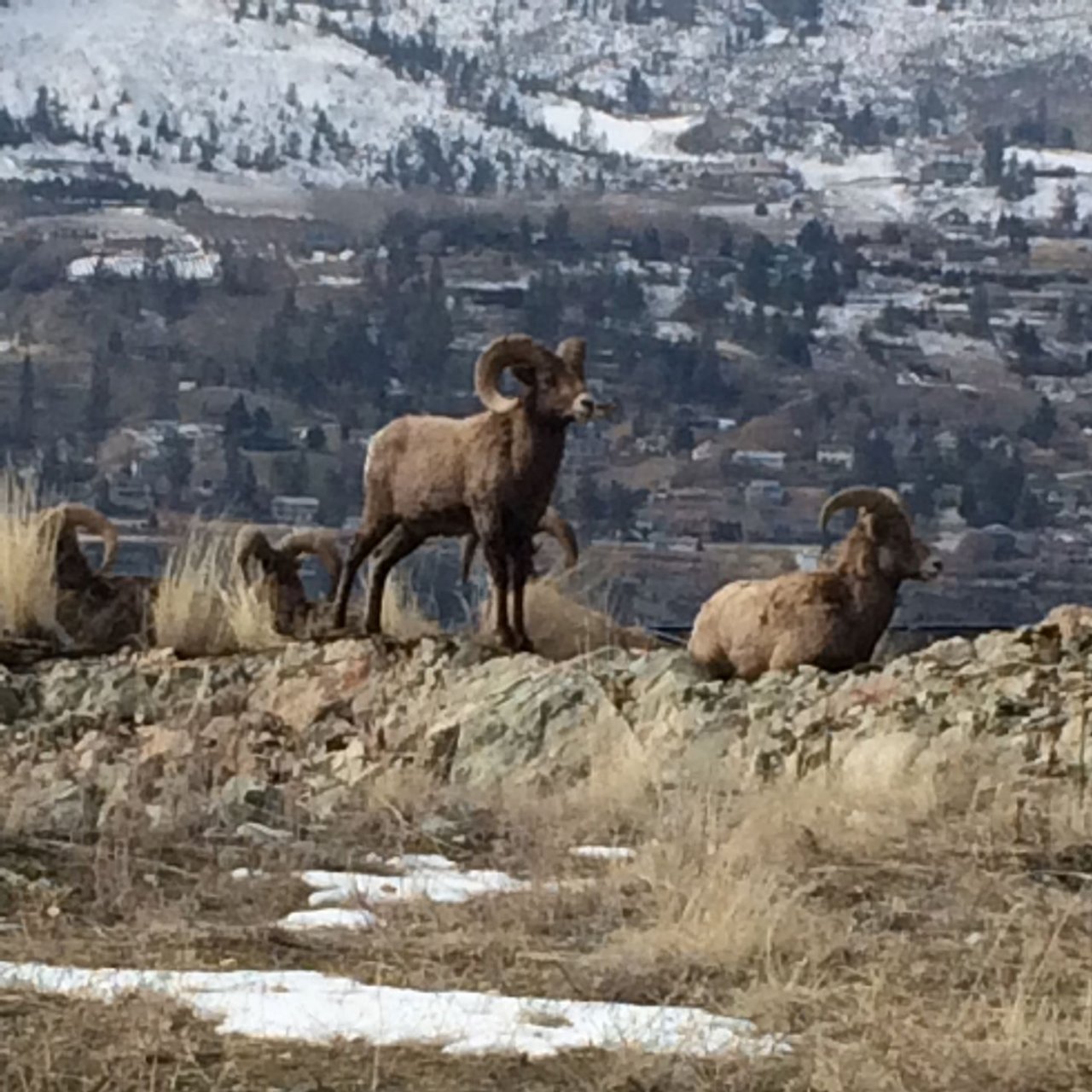 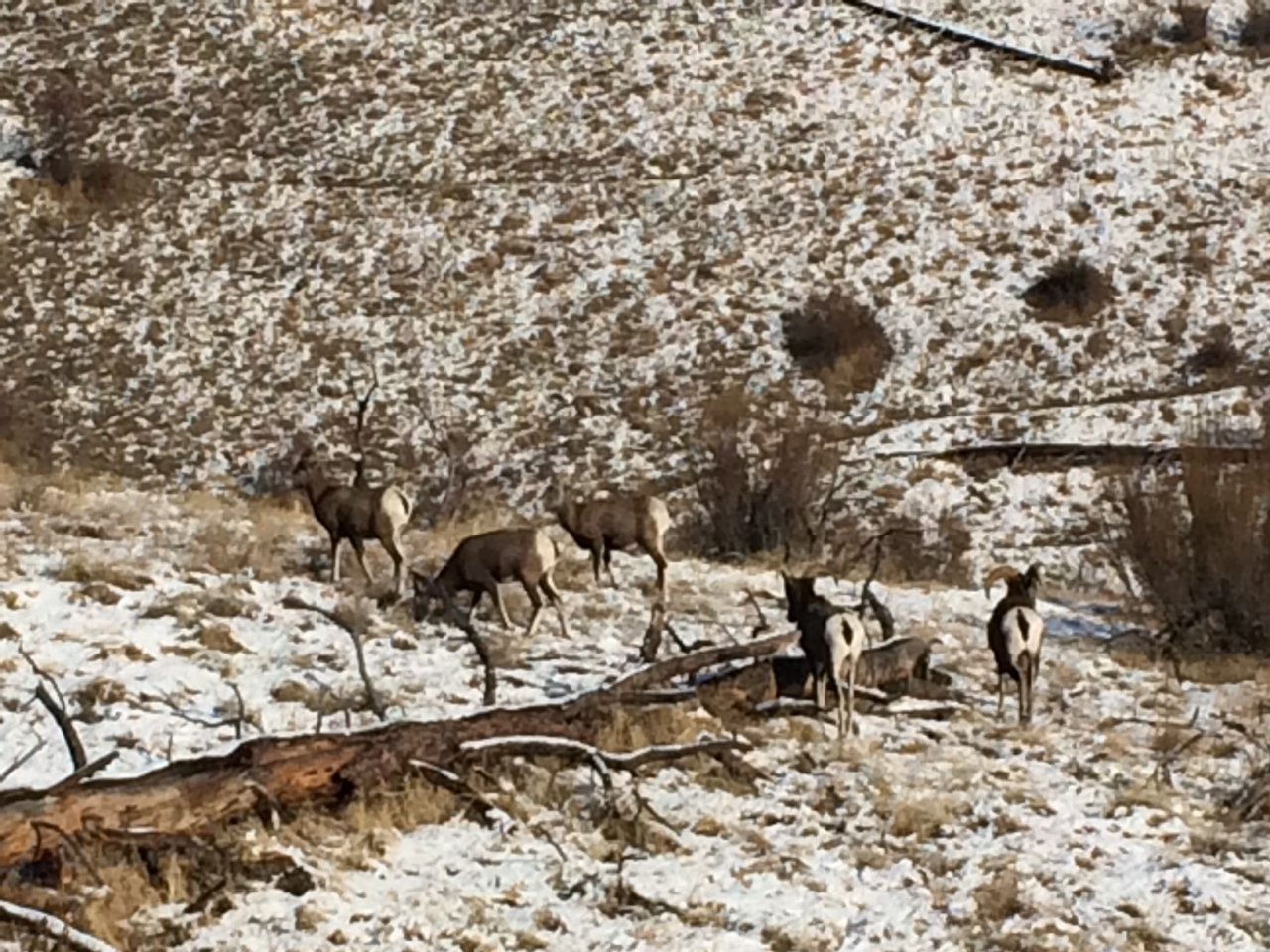 The other two lakes nearby are Skaha Lake, along the west side of which wends the famous Kettle Valley Rail Trail. And then of course at the north end of the small city of Penticton is the big lake. Okanagan Lake is over 100 kms long and runs as far north as Vernon. The Southeast side of Okanagan Lake boasts Okanagan Mountain Provincial Park and has a string of backcountry campsites that are situated between the south end of the lake at Penticton and Kelowna to the north.

The Okanagan Valley can be a bit of a wind funnel, Kite boarding is a big sport on both the bigger lakes. This also means that if you pick the right time and right launch spot, you can do some quite exciting and serious downwind paddling. So especially on Skaha and Okanagan Lakes, weather is a factor.

Anyway, off season paddling, fall; September through December and spring, ice out until June, are my favourite times to paddle these lakes. They are beautiful in their own right, but also a great place to train for the ocean trips I love. Oh, and if you happen to like wine, this is Canada's vineyard as well.

Just a quick look at some of the attractions of paddling in my neck of the woods.

I spent a few years living in Kelowna, and my folks still live there. I have been meaning to do a bit of paddling and camping on Okanagan lake for a few years now.

Great pictures. Especially of the Bighorns; always thought they were very impressive animals.

Thank-you for the photos and text @SalishSeaNior. I don't get up your way often and have never paddled any of the lakes in the Okanagan. This is good intel. I will look at the maps with a better understanding of what kind of tour I could do. Your image of Osoyoos Lake is print worthy. I'm not saying that just because I had a Lootas and still long for it.

I concur on the delights of winter paddling. One typically sees more animals. They tend to have the same reaction, "Hey, it's a human. Weird!" I imagine the same way we would feel if we saw a butterfly up there right now. I wonder if the sheep are trying to figure out if you're some sort of centaur merman thing.

I would gladly trade our Sea Lions for your Big Horns. Ours tend to smell and sound like "Upset Stomach" ramped up to lawnmower decibels.

Thanks for the write-up. I wonder if I should throw my kayak on the car and persuade my wife to take a detour next time we drive from the coast into Castlegar to visit her family!

Yah, also thanks SalishSeaNior, I also spent years living on and in Okanagan Lake near Vernon and those photos sure bring back similar images.

For those of you who wish to muse further about doing a paddle trip in the Okanagan, I offer this link, titled Okanagan Lake Paddling Route on Trails B. C. As the write up states, it is a concept proposal. But with my local knowledge, it is in my view certainly doable. As stated in my original post, there are a string of backcountry campsites along the shore of Okanagan Mountain Park. There are also some beautiful and extremely popular drive in Campsites on the west side. South Okanagan Lake Provincial Park just north of Summerland has 8 walk in campsites and is a lovely place to spend time. My wife and I kayak camped here in the last week of April a few years back. Another lovely car accessible park on the west side is Bear Creek Provincial Park just north of West Kelowna. Further up are Fintry and Ellison Parks, both of which are also extremely popular in summer. I have camped in a couple of these parks with my children and grandchildren in summer, but it is mandatory to reserve space months in advance and the parks are very crowded in summer.

But off season, fall and spring, no worries. In fact late September, or early October, the lake would still be warm enough to perhaps risk a swim or two on the glorious uncrowded sand beaches The longest day on this proposed route would be from Bear Creek to Fintry, just over 30 kms. There would also be at least 3 crossings of the lake which can be more than 2 kms across. The wind would definitely factor in with prevailing winds from the south, but not always so. Winds and squalls can also come up very quickly, so this is not a beginner route. According to google maps, the distance from Penticton to the very north end of the lake is about 170 kms as the car drives, and would be quite proximal in a kayak.

Kelowna has an active canoe and kayak club, so I expect one might find further information and local knowledge there, especially about the North end of the Lake. 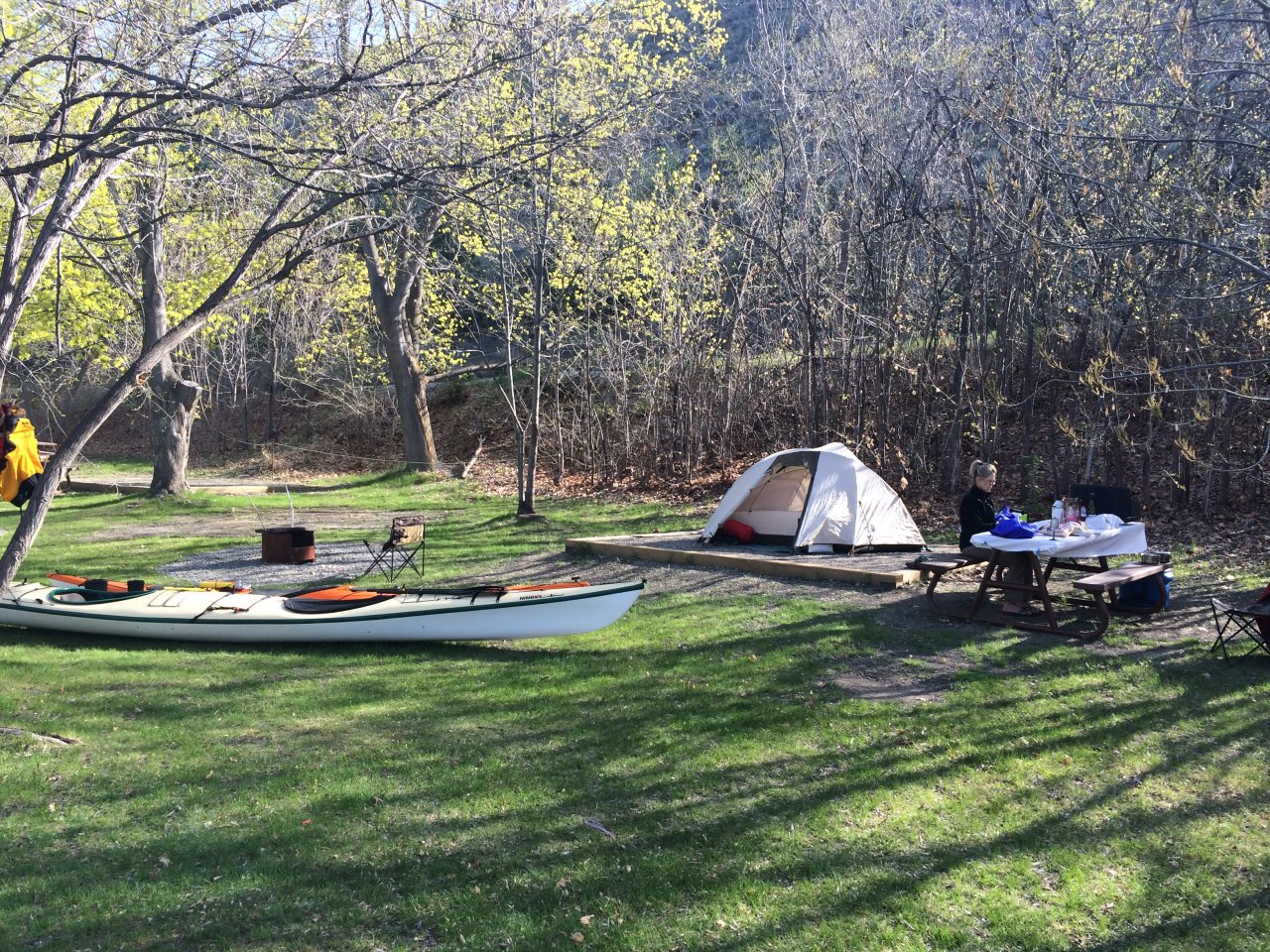 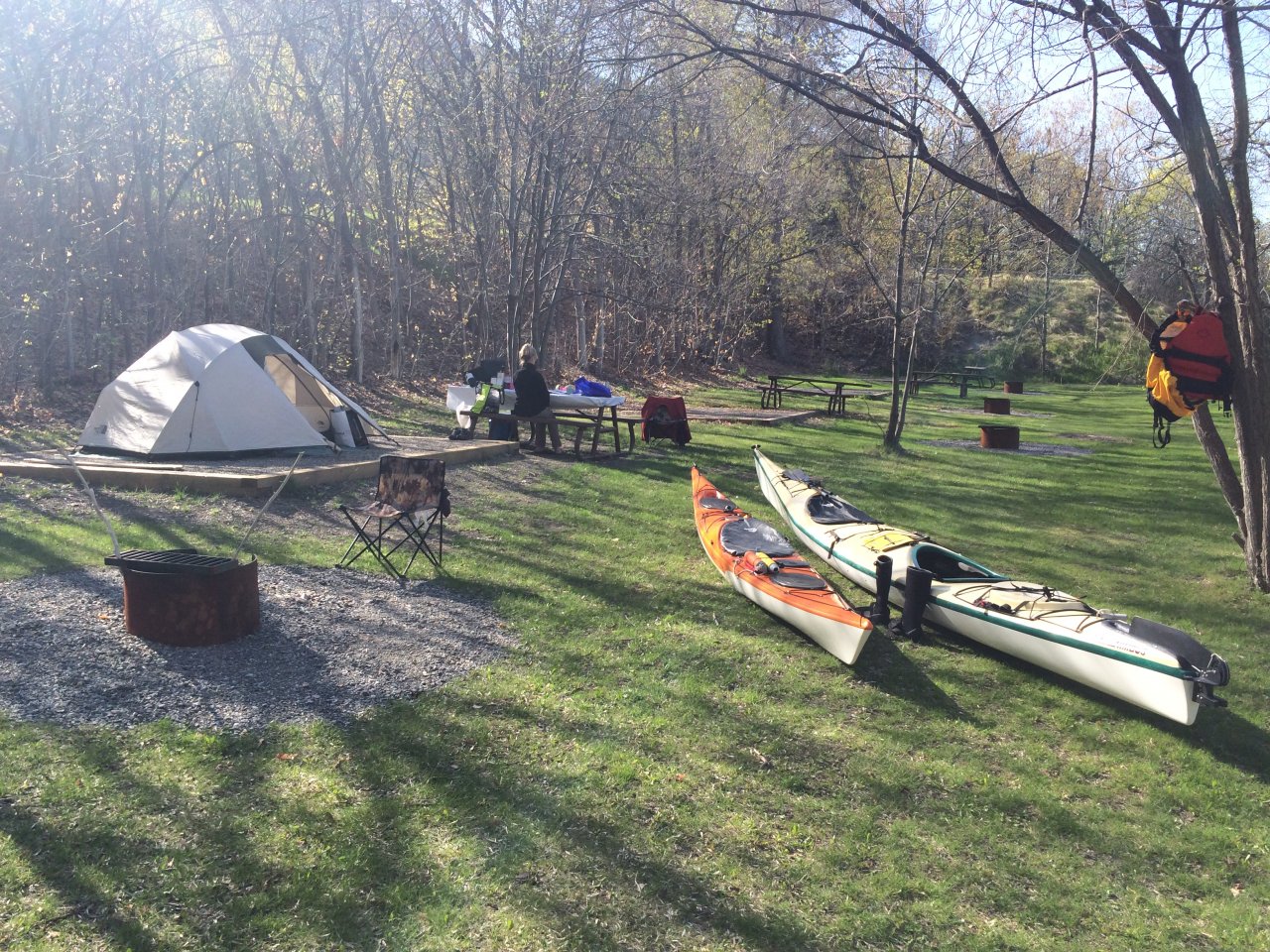 The images are taken at the walk in campsite at South Okanagan Lake Provincial Park on April 26th two years back. Trees just leafing out, and sunny warm Okanagan weather. Kayaks and happy wife! Happy life!